These Veterans Charities Aren’t Real, But Goddammit They Should Be

There may be a surplus of veterans charities out there, but we could always use a few more, right? We have some suggestions 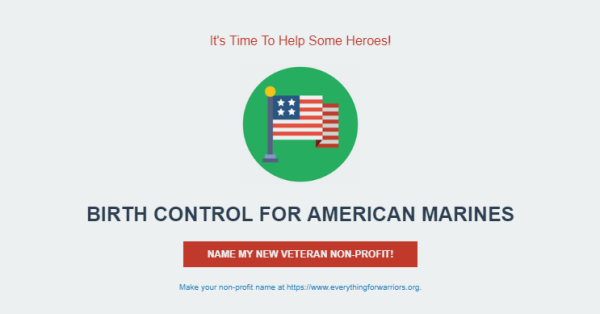 Do you think there are too many veteran nonprofits with unclear goals and way too much overhead? Think again! What the world really needs is more of those.

Introducing Lamp Shades for Heroes, Tactical Giraffes for Ambitious Marines, Old Coats For Virginia Cavalry Scouts, and probably a few hundred unnecessary veteran nonprofits, all cobbled together with the help of an algorithm and a heavy dose of sarcasm.

These names are just a few of those auto-generated by Everything for Warriors, a gag site that playfully lampoons the flood of 501(c)(3) organizations devoted to military veterans that have emerged in recent years.

As Chad Garland with Stars and Stripes reported yesterday, the site was created by Brian Wilson, who served in Iraq during his six years in the National Guard and now works at Combined Arms, a (very real) nonprofit that connects connects Houston-based veterans with vetted charities in the area.

Seems like every veteran is trying to find a niche for their non-profit or business. For those of you trying to get in on the sweet action, I coded a "Veteran Non-Profit Name Generator". Comment back with your favorite. https://t.co/j2xYi9P4ae

“There are some 250 places that offer help to veterans in Houston alone,” Wilson told Stars and Stripes. “Some have disappeared, some have been investigated for fraud, some have succeeded and some … are just there not really making an impact.”

The site generates its names from hundreds of phrases and nouns and then sprinkles in bits of military jargon, which is how you end up with gems like this:

So, pretty much your standard care package?Everything For Warriors

Which got us thinking? Which of these faux foundations would we actually want? Glad you asked.