Paul Bremer was once the most powerful American citizen in Iraq. Now he'll live forever as a popular Internet meme. … Continued 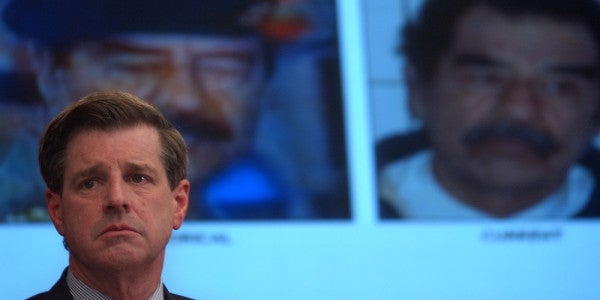 Paul Bremer was once the most powerful American citizen in Iraq. Now he'll live forever as a popular Internet meme.

Bremer served as the head of Iraq's Coalition Provisional Authority and de facto chief executive of the country after the U.S.-led invasion of in 2003. But he all but disappeared from public life following the establishment of the Iraqi Interim Government in 2004, while his decision to disband the Iraqi military all but ensured his historic role as fall guy for the U.S. government's subsequent missteps in the country. As Task & Purpose reported back in March, he's currently a ski instructor in Vermont.

Now, one of the most enduring images of Bremer's time in Iraq is making a comeback as a piece of Internet culture.

According to a new report in The Daily Beast, Bremer's December 14, 2003 declaration that U.S. forces had captured ousted Iraqi dictator Saddam Hussein has started appearing as an interstitial in user-generated footage across sites like YouTube and TikTok, usually as a coda to scenes in which a suspect is caught red-handed, or unaware, while in a compromising position.

“Ladies and gentlemen,” Bremer suddenly announces, “we got him.”

Since I am old and cranky, here's how The Daily Beast's Will Sommer describes the phenomenon:

Starting this summer, the old video began to be remixed with pop music and clips of celebrities being exposed in various ways. Dubbed “Ladies and gentlemen, we got him,” a person or character is shown getting “busted” in some way while the 2012 pop song “Baby I’m Yours” by Breakbot plays in the background.

When the particular moment of revelation arrives, the Bremer clip appears to declare “Ladies and gentlemen, we got him.” Then he’s replaced with a distorted version of the song and footage of a SWAT team breaking in. In one popular version, controversial conservative professor Jordan Peterson struggles to name his favorite woman writer. As an interviewer glares at Peterson, the Bremer clip pops up to announce “we got him.”

The Daily Beast reached out to Bremer to get his reaction after his 15-year-old granddaughter tipped him off to his newfound status as a rising meme star. Now 77, the former viceroy seemed to have no fucking idea what was going on. “Many times I couldn’t figure out what the connection was with the announcement,” he told the Daily Beast. “How are the words fitting into the memes?”

“If you can explain to me how these things go viral on the internet, I’d be pleased to be educated,” he added.