No, an Army specialist did not purposefully mis-translate a public affairs post to say ‘Eat my ass’

"[I]n the absence of new facts, this does not seem to be an accurate report.” 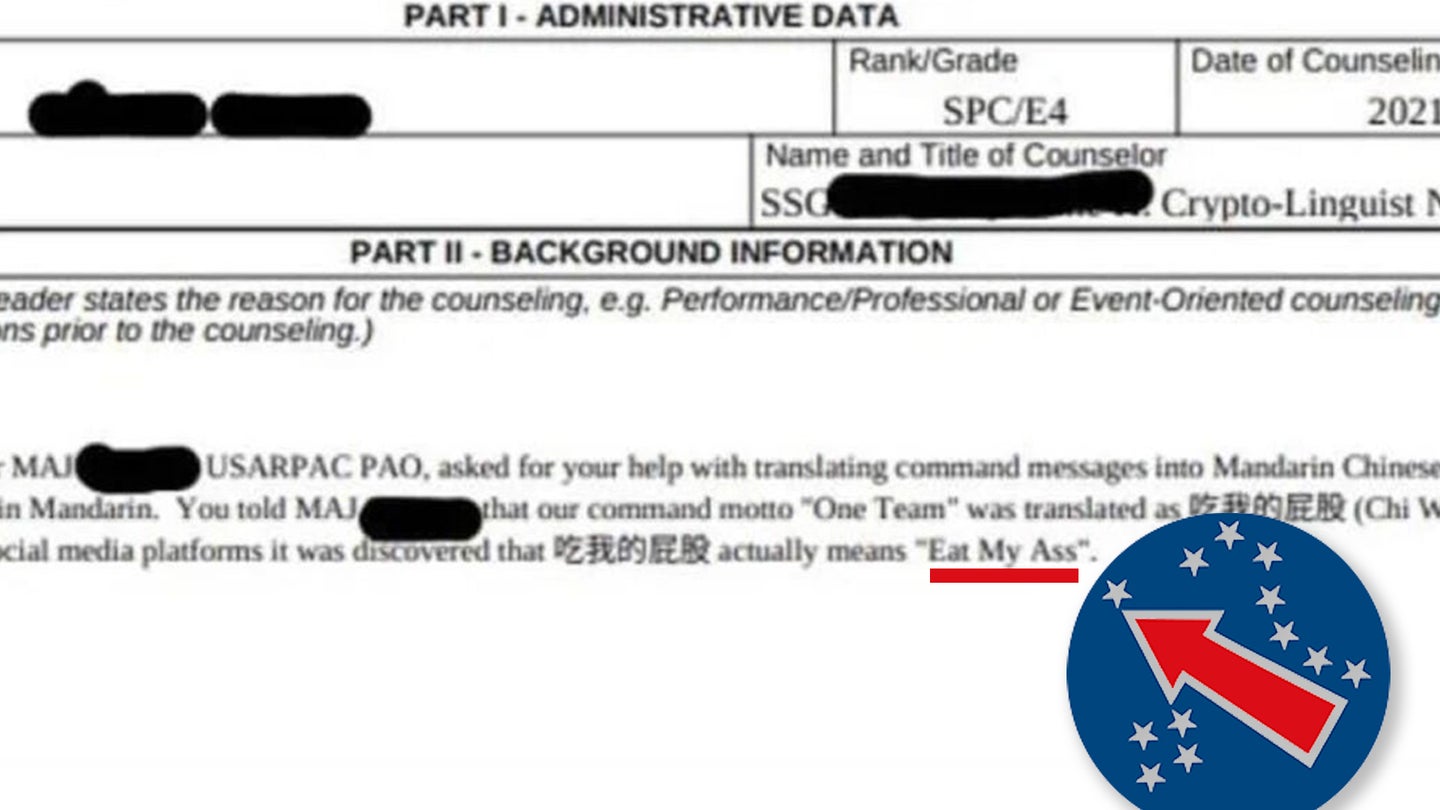 There are Mondays and then there are Mondays, and beginning my week by asking an Army public affairs officer if their team accidentally shared the phrase “Eat my ass” on social media definitely falls into the latter category.

A counseling statement posted on the unofficial Army subreddit appeared to show that a specialist — isn’t it always a specialist? — with U.S. Army Pacific was asked to help translate a message for a USARPAC public affairs officer. The counseling statement says that officer, a major, asked the specialist to translate the command motto “One Team” into Mandarin Chinese, but after the message was shared “across multiple social media platforms,” it was discovered that the specialist’s translation actually read, “Eat my ass.”

Sadly, according to the deputy director of public affairs for USARPAC, that didn’t happen.

“We have polled our Public Affairs enterprise and social media and cannot find any factual basis to support this document,” said Jonathan Riley. “USARPAC Public Affairs has not requested the translation described nor released anything in Mandarin on our owned platforms … We will continue to maintain our awareness and let you know if any new information contradicts what we currently know, but in the absence of new facts, this does not seem to be an accurate report.”

Nevertheless, the responses on Reddit were what you might expect: Comments expressing that, “I’m not even mad, I’m impressed,” and nostalgic wishes to be a specialist once again.

“Promote ahead of peers,” one person said.

“As a PAO, I constantly teeter between ‘I pray this never happens to me’ and ‘God damn, that’s still funny,’” said another.

One Reddit user who said they are an Army linguist commented that “fucking with people with translations is incredibly common.” That comment alone will surely haunt some public affairs soldiers.

While this counseling statement appears to be a joke, there is something to be said for how quickly many took it to be true. Even though I knew I needed to verify it, there was a part of me that saw it and thought, “Well, that makes sense.” After all, there was that time a non-commissioned officer was supposedly counseled after spending their annual clothing allowance on Clash of Clans and then was “identified as being unable to button your pants.”

So it stands to reason that someday, somewhere, a specialist will get the phrase “Eat my ass” on an official Army social media account. But that day is not today. In this case, the E-4 mafia did not strike again.