But beyond his legacy as a comedian, Robin Williams' response to U.S. troops in Kuwait who turned their backs on him during a 2007 performance is worth remembering 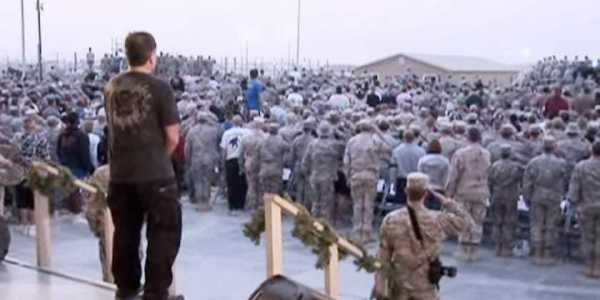 Today, July 21, marks the birthday of the late comedian Robin Williams, who took his own life in August 2014.

Williams was known for many things, including his frenetic comedy style and his ability to inspire laughter no matter the context. But beyond his legacy as a comedian, his response to U.S. troops in Kuwait who turned their backs on him during a 2007 performance is worth remembering.

Williams, then at the heigh of his career amid forays into several dramatic roles, was visiting Camp Arifjan in Kuwait as part of a USO tour for U.S. service members, many of whom were either headed to Iraq or supporting combat troops deployed there.

In the middle of one of his bits, Williams is interrupted by a trumpet sound — 'Retreat,' the signal to U.S. troops that the American flag was coming down at the end of the day. Here's how Paul Szoldra described the moment following Williams' death:

At its sound the custom is to face the music, stand at attention, and salute. In this case, Williams is left onstage, watching thousands of soldiers turn away from him, and he has no idea why.

But in the video that was later released, we see the comedian, brilliant for his improvisational skills, realize that this moment is a special one. He is not a comedian. He is not a big-name celebrity. He is just some guy on a stage, and that music, and that flag coming down, is much more important.

Then, the music ends, and Williams returns to his show with a telltale joke before diving into the rest of his show: “I've never had an entire audience just go, forget you!”

Although Williams would have been 69 years old today, his legacy as a comedian is eternal  — and for those who saw his moment of deference in Kuwait, his support for America's fighting men and women overseas will stay with them forever.

Watch the full clip below: