Get your hands on this Rubber Band Minigun and unleash hell 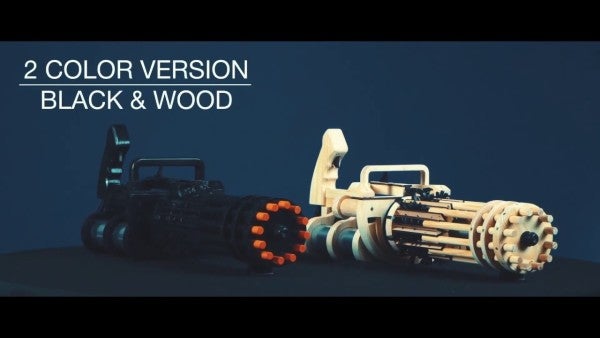 Do you find yourself wishing for a way to dish out hundreds of rubber bands in a matter of seconds? Do you have disposable income, and no sense of shame about being an adult who blows their pay on toys? And do you randomly quote lines from 80s and early 90s action flicks?

Thanks to the mad scientists at Weaponized T-Rex — who in addition to making wooden toys, contraptions, and other engineering marvels, also have the single greatest company name I've ever heard of — you can now get your hands on the
Rubber Band Minigun:

The fully-automatic Rubber Band Minigun is made almost out of wood (though it also comes painted in solid black) and fires at speeds of 200 rubber bands a minute thanks to its electric motor.

Then, once your ammo is depleted, it allows for a relatively easy reload for those who
“ain't got time to bleed.”

The minigun comes in two versions: a fully assembled model, and a kit if you want to build it from the ground up.

For those interested in getting their hands on this bad boy, they can pledge on the
company's Kickstarter page, then wait anxiously until February 2020 when they're slated to arrive.