A Sailor’s Worst Nightmare: When Mom Inadvertently Turns You Into A Viral Meme

Oh boy, what did mom do now? We suspect that'll be the thought other military personnel will likely have in … Continued 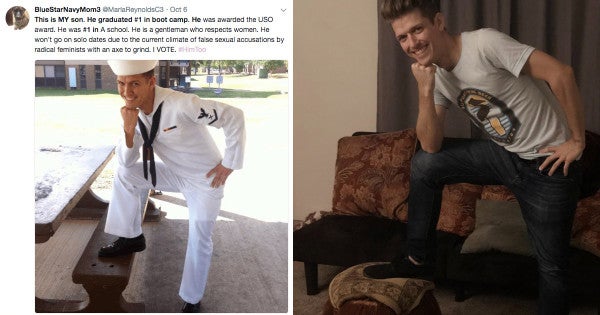 Oh boy, what did mom do now?

We suspect that'll be the thought other military personnel will likely have in the future after one poor, unsuspecting sailor got caught up in a viral meme started by his mom on Twitter.

What started off as an innocent tweet from the unnamed mom extolling the virtues of her sailor son quickly devolved into a political statement that he didn't exactly agree with.

His mom's usage of the #HimToo hashtag was an answer to #MeToo, casting men as victims of false allegations of sexual assault.

Needless to say, mom didn't check first with the former sailor, Pieter Hanson, who was in the middle of an exam while attending classes at the University of Central Florida, according to The Washington Post.

Mom's tweet went viral as all hell, getting shared thousands of times and inspiring many others to create their own parodies.

“It doesn’t represent me at all,” Hanson told the paper. “I love my mom to death, but boy … I’m still trying to wrap my head around all this.”

On Tuesday, Hanson created his own Twitter account, aptly titled @thatwasmymom, and tweeted a viral image of his own.

That was my Mom. Sometimes the people we love do things that hurt us without realizing it. Let’s turn this around. I respect and #BelieveWomen . I never have and never will support #HimToo . I’m a proud Navy vet, Cat Dad and Ally. Also, Twitter, your meme game is on point. pic.twitter.com/yZFkEjyB6L

Can you imagine if he was still in uniform? The chain of command would have a conniption fit. Still, let's all enjoy some of the various responses to the original below:

This is MY son. He graduated #1,231 in boot camp. He was injected with super serum. now he is #1 in boot camp. He is a gentleman who respects women and kills Hydra agents. He won't go on solo dates due to the fact he is almost 100 years old. I VOTE. #HimToo pic.twitter.com/oQZGkzaIHb

This is MY son. He graduated #1 from the University of Flavortown. He was awarded three banging fajita poppers. He was #1 in flamin' hot crunch. He won't go on solo dates due to the current climate of false accusations of taking the last slice of pizza. I VOTE. #HimToo pic.twitter.com/4DY151a2W7

This is my son. He was #1 on the charts. He won’t go on solo dates even though he never gave up, let you down, run around, or deserted you, make you cry, say goodbye, tell a lie nor hurt you #HimToo pic.twitter.com/Q5sMpGIVR3