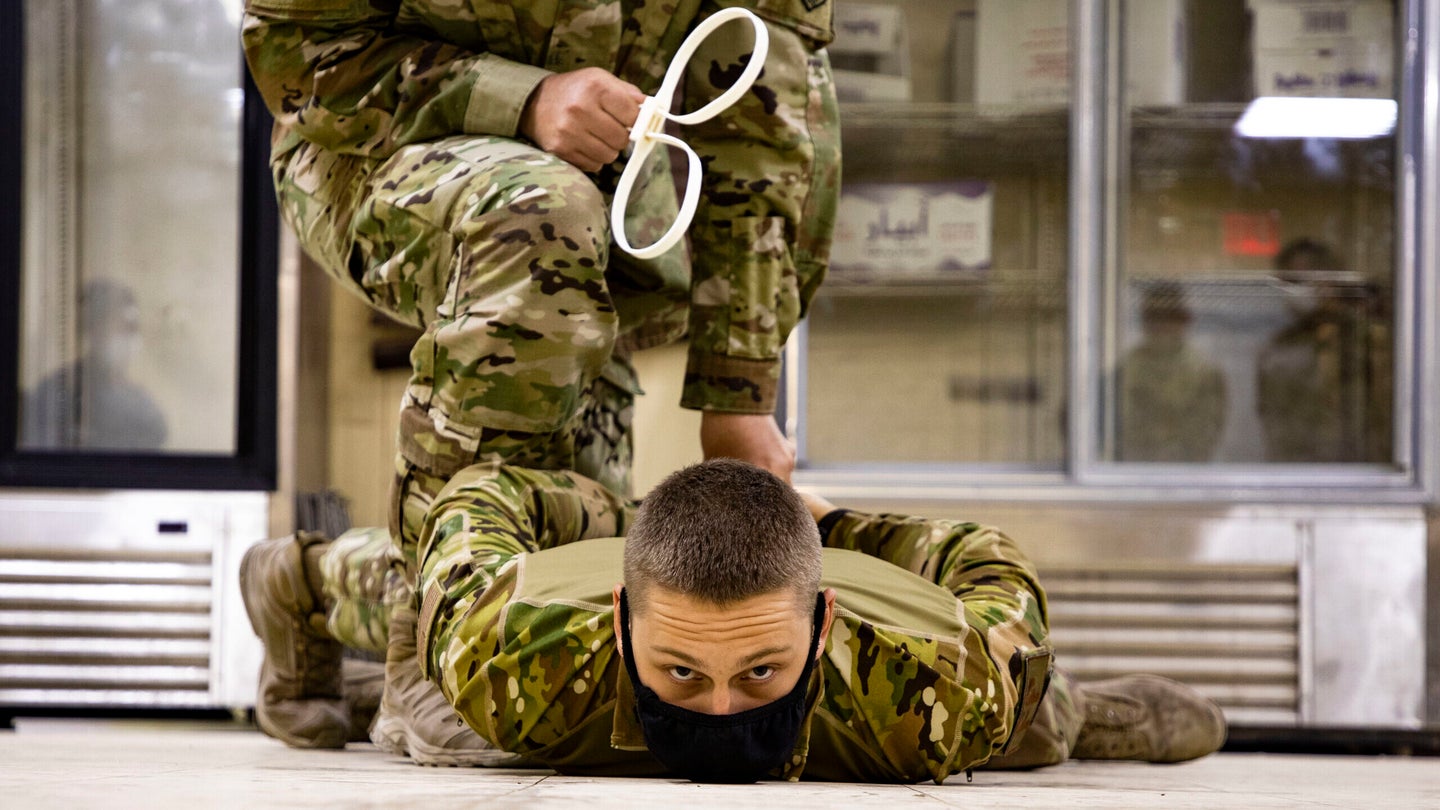 An Army sergeant major in Kuwait recently had a grown man handcuffed and hauled to the military police station after he was stopped for the shocking crime of wearing headphones.

And no, before you ask, this is not from Duffel Blog. It was first reported by Army Times.

Army Capt. Justin Thomas, a chaplain with the 628th Aviation Support Battalion, was recently spotted in civilian attire at Camp Buehring with headphones in his ears when a sergeant major, clearly with far too much time on his hands, flagged him down to apparently enforce the service’s ban on wearing headphones under certain circumstances.

The incident was first revealed by U.S. Army W.T.F.! moments, which is fitting, since this may be one of the biggest W.T.F.! moments in the history of the Army.

The sergeant major was “enforcing a standard designed to keep soldiers safe,” said Capt. Paul O’Daniel, a spokesman for U.S. Army Central, explaining the “on-the-spot correction” was meant to help prevent soldiers from being hit by vehicles. “This is the type of correction we expect to see from any soldier.”

After the publication of this story, a second Army official said the chaplain didn’t have an identification card on him and was handcuffed because he was being taken to a military police station to have his identity confirmed.

“It is standard practice to handcuff the subject in order to protect the safety of law enforcement personnel,” said Col. Armando Hernandez, public affairs director for Army Central. “Thomas was released … after his identity and authorization to be in the installation was confirmed.”

Officials with U.S. Army Central declined to identify the sergeant major or the policy the chaplain had apparently violated prior to publication. But on Thursday, Hernandez shared the policy on headphone use for installations in Kuwait, which does not allow them outside of a fitness center or during special events.

For what it’s worth, Thomas took it all in stride, telling Task & Purpose in a statement that he didn’t harbor any ill will toward the sergeant major: “The [sergeant major] was trying to do his job and enforce a policy about walking with headphones … but I couldn’t hear him.”

But others see it differently. “Some people have no business being leaders in the United States Army,” retired Army Col. Bob Wilson said of the sergeant major.

It remains unclear exactly what was said between Thomas and the sergeant major, but the conversation ended with the captain being handcuffed and transported to the station by military police officers, who were “very professional,” according to Thomas. The officers then notified his command that he needed to be picked up.

Let’s play out this scenario for a second, shall we? You’re over at the 628th Aviation Support Battalion and a call comes in from the MPs. This must be serious. On the other end of the line, a voice tells you that your chaplain needs to get picked up.

Well, you see, we have this sergeant major over here and the chaps was wearing headphones…

As one active-duty soldier explained to Task & Purpose on condition of anonymity, being on any of the various U.S. military bases in Kuwait seems to be the worst of both worlds: It’s technically a deployment, but it’s more like being back in garrison than being in say, Syria, where the mission is usually more important than dumb shit like this.

“Kuwait isn’t a real deployment, but it’s not garrison either. It’s the worst parts of both smashed together,” said the soldier, who was deployed to Kuwait in 2016. “One of my soldiers got a ticket from the MPs for an equally egregious crime: wearing flip flops.”

Naturally, the Army community on Reddit and the W.T.F.! moments comments section is having a field day with this.

“‘I’m not sure why we’re having issues with retention, [sergeant major]'” one person wrote on Reddit.

“Headphones? Straight to jail,” wrote another.

Add a sergeant major, a captain, an MP, and being in the desert with nothing to do, wrote another, and you get “big green getting stupider.”

This article was updated after publication with additional comments from an Army spokesman.