No U.S military branch is complete without a line of gun-toting action figures, and with your help, the Space Force could finally get its plastic treatment … though with a few Sci-Fi twists. 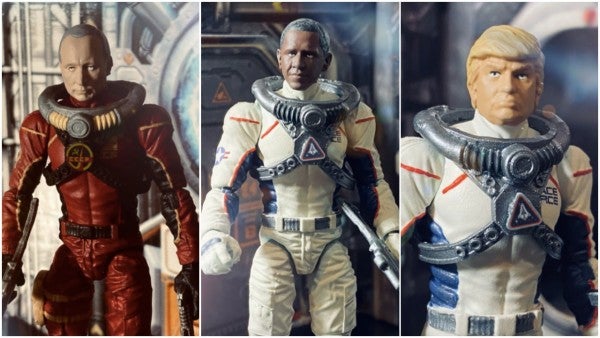 No U.S military branch is complete without a line of collectible, gun-toting action figures, and with your help, the burgeoning U.S. Space Force could finally get its plastic treatment — with a few major Sci-Fi twists.

That's right, a new Kickstarter is raising money to produce a line of four-inch tall, spacesuit-clad figures who come from an alternate universe where Presidents Trump and Obama team up to beat Russian president Vladimir Putin in a rocket-fueled race to Mars.

The line includes figures of Trump, Obama, and Putin, each with 14 points of articulation and three interchangeable heads. For Trump, the other heads include the Ghost of Ronald Reagan and a helmeted Space Force Red trooper; for Obama, Uncle Sam and a Space Force Blue trooper; and for Putin, the “undead prophet” Gregori Rasputin, and a Hydra-esque Space Agency Trooper.

Our brave elected leaders will need all the help they can get, because the Russians have a major head start to Mars, according to a splashy comic included on the Kickstarter page.

“Dammit! The Russians have cracked interstellar space flight! They just did a moon lap in 26 hours,” exclaims a distraught Trump as he gazes pensively out the windows of the Oval Office.

In such desperate straits, Trump does the one thing he swore he would never do:

“If I’m gonna make America great again, I’m gonna have to be the bigger man,” he says. “Get me Barack Obama!”

Adding a dash of energy politics to an already out-of-this-world story, the U.S. must reach Mars first in order to exploit Hyperium, also known as “red dust,” an element found only on Mars “with unlimited energy applications,” Trump says in his pitch to Obama.

Hyperium is the best way to wean America off fossil fuels, Obama deduces, but not if the Russians have anything to say about it.

Luckily, our presidents hatch a plan to divide and conquer. Space Force Red, featuring Trump, the ghost of Ronald Reagan, and an unnamed spacesuit-clad monkey, will try to intercept the Russians; while Space Force Blue, including Obama, Uncle Sam, and an unnamed moustached astronaut, will mine the Hyperium.

But Putin, with a cast of red-clad Space Agency troopers (including Rasputin) behind him, is certain the Americans “will lose,” he says in the comic.

Each figure comes with interchangeable heads, a laser blaster, and a pulse rifle, according to promotional images on the Kickstarter website. But first, the toy creator, Amazo Toys, needs $40,000 in the next 29 days to get the project off the launch pad. As of Tuesday, 200 backers had already raised $21,581.

If it exceeds $40,000 in fundraising, Amazo Toys says it will unlock extra interchangeable heads, including Coco the Space Monkey, Nikola Tesla, a Russian Robot, Vice President Pence, and Josef Stalin.

If the fundraising hits $85,000, they might even throw in a batch of Secret Service Agents clad in grey, black or blue suits.

The stretch goals are “beyond this world,” writes toy correspondent Scott Zillner in a post about the campaign for Toy Wizards, but “the theme is totally unique, the rewards are nice,” and “this whole experience is something to check out.”