The Complete Parachute Solutions  team includes former Army Special Forces and Navy SEALs, who will be testing a new oxygen system that could be used by current U.S. special operations forces 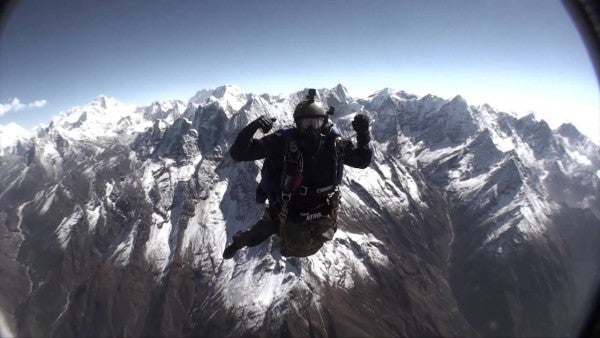 DELAND, Florida — A military freefall parachuting team has a better reason to conquer Mount Everest than “because it's there.”

The 12-member team, assembled by Complete Parachute Solutions of DeLand, will attempt a world record for the highest-elevation tactical military freefall parachute landing. But it's more than a record. It's validation.

“When CPS says we've landed our parachutes at over 20,000 feet, that means we've done it,” said Johnny Rogers, the company's vice president.

Rogers, who has about 4,000 jumps himself as a retired Army Ranger, is not going to Nepal, but company President Fred Williams, a former Navy SEAL, has already left to prepare for a series of jumps, escalating in elevation to 20,170 feet above mean sea level on the West Col of Mount Baruntse.

If skydiving isn't menacing enough, jumping at the world's tallest mountain adds to the danger.

Many climbers and jumpers face altitude sickness due to thin air.

U.S. Department of Defense rules require any military freefall jumps above 12,900 feet include supplemental oxygen, not just for the jump but the long trek back to civilization.

The team will be using a multipurpose tactical oxygen system from TopOut Aero, which Rogers says is a less technical, less expensive piece of equipment than the Department of Defense's current provider.

“After each jump, there's a task. So not only are they jumping, but they have to hike up a mountain, climb down an ice wall to demonstrate that the oxygen — you know, the system — functions with the human body through jumping, through climbing,” Rogers said.

Among the team will be human-performance experts to measure heart rates and stress levels as part of the validation.

Complete Parachute Solutions is “a consortium of leading skydiving manufacturers,” using the DeLand firms Performance Design for its canopies and United Parachute Technologies for some of its harnessing containers. The company also trains jumpers both in DeLand and Coolidge, Arizona.

The U.S. Navy awarded CPS a $9.3 million contract modification to CPS last week. The company will provide its multi-mission parachute course, all the training and technical support, in Coolidge, with options for the Navy to continue through September 2022, bringing the total value of the contract to nearly $43 million.

Before heading to Nepal, the CPS-led team trained at about 10,000 feet elevation in Leadville, Colorado.

But the Mount Everest region's elevation is unique, as are the elements there.

“Weather in Everest changes rapidly and we need certain winds and air to be able to get up that high,” Rogers said. That's in part why the expedition is taking place in October, the most consistent month for weather there.

Orlando military contractor Todd Wilcox, a former CIA officer and Green Beret, will be among those joining Williams in making the jump.

“The military freefall is a way in which Special Forces infil, or infiltrate, a target area,” Wilcox said.

“You have to be really accurate,” he said. “The changing winds, the terrain as you pick your landing spot … it requires confined drop zone training and canopy control. It's a lot different way to brake, different steering wheel clutch, an accurately maneuver … our special ops folks are amazing. They drop at night in the g-zone.”

Wilcox is executive chairman of Patriot Defense Group, a defense and intelligence services company he founded following his stints as a CIA officer and Special Forces commander in the U.S. Army. He ran for U.S. Senate in Florida in 2016 until fellow Republican incumbent Marco Rubio decided to jump back into the race following his bid for president.

On a recent Facebook post, Wilcox explained why he's attempting the jump: “Do not go where the path may lead, go instead where there is no path and leave a trail.”