Steven Spielberg and Sam Mendes have teamed up to create new World War I drama '1917' — and they're set to start working on it next month. 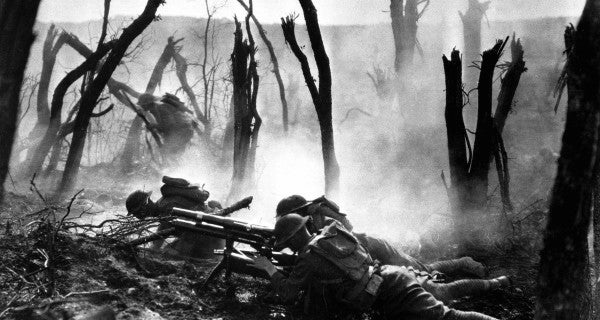 The filmmakers who gave the world Saving Private Ryan, and Jarhead are shipping out to recreate World War I in the upcoming drama 1917.

The film will be produced by Steven Spielberg (Jaws, Indiana Jones, Jurassic Park, Saving Private Ryan) and directed by Sam Mendes (Jarhead, Skyfall, Spectre, Road to Perdition) — and the two are going to work on it as soon as next month.

The project secured permission last week to begin shooting at the Govan Graving Docks in Glasgow, Scotland, according to BBC News. Production is slated to start April 22 and last 10 weeks while they set up, film, then dismantle the set. It's unclear how much of the film will be shot in Glasgow. The film is expected to be released in December 2019.

Spielberg's production company Amblin is set to produce the movie, with Mendes signed on to both direct and cowrite the script, according to Den of Geek. It'll be his first time working on the writing front, where he'll be joined by Krysty Wilson-Cairns (Penny Dreadful).

Not much is known about the plot at this point in time, just that it takes place, unsurprisingly, in 1917, which is the year the United States officially entered the war. Based on IMDB's cast list, there are just two actors attached to major roles: Dean-Charles Chapman, who played Tommen Baratheon on Game of Thrones, and George MacKay (Captain Fantastic, 11.22.63).

Given that Speilberg is signed on to produce, we can hope to see his fingerprints, if not his signature style, which helped sear the opening scene of Saving Private Ryan into audience's memories by placing the audience in the center of the action, not as an idle spectator, but as a participant.

It's what Dale Dye, the military adviser on Saving Private Ryan, described as “asses and elbows” in a previous interview with Task & Purpose.

“That's how you tend to see firefights if you're involved in it,” Dye said. “You see the other guy's butt and his elbows, and everybody's down as far as they can get.”

With luck, we might see World War I told through the eyes of the young men who fought it as they scramble through mud-filled trenches, fumble with gas masks as a yellowish-green tide of gas rolls in, and stalk across no man's land under a creeping barrage of artillery, knowing that their enemy waits just yards ahead.

Couple that style with Mendes' ability to make a character's complex internal struggles compelling and relatable and his tendency toward vivid yet simple cinematography, and we might just get a movie that drops us right onto the Western front, and leaves us there for the duration, trapped in a fight that claimed millions of lives and left even more wounded.

WATCH NEXT: They Shall Not Grow Old Trailer