Last Friday morning, director Spike Lee woke up at his home in New York City and surveyed the day's fresh... 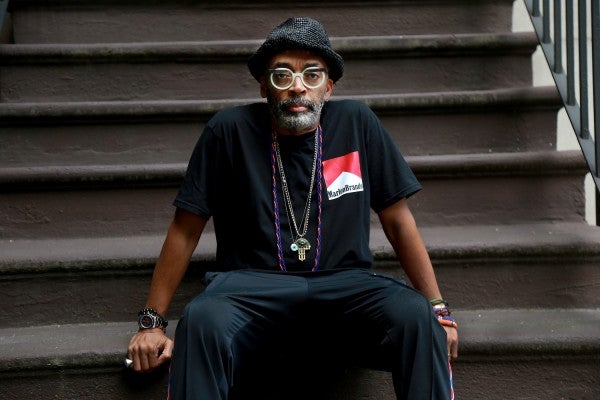 Last Friday morning, director Spike Lee woke up at his home in New York City and surveyed the day's fresh horrors in a world that had come to seem at once both unrecognizable and all too recognizable.

A deadly pandemic. Forty million Americans unemployed. And now, in the wake of the death of George Floyd days earlier at the hands of police officers in Minneapolis, a conflagration of protests rapidly spreading across the country.

“I woke up this morning and I see my brother from CNN [correspondent Omar Jimenez] who's just doing a story and he got arrested,” Lee told The Times by phone. “I'm reading on [President Trump's] Twitter, 'When the looting starts, the shooting starts.' Twitter flagged that so he put it back on not through his personal Twitter account but the White House. WTF! OMG! Jesus, Mary and Jo-Jo!” He let out a dark chuckle. “I mean, you've got to laugh to keep from crying.”

Three decades ago, Lee's seminal 1989 film “Do the Right Thing” climaxed with an unarmed black man, a gentle giant named Radio Raheem, being choked to death by a racist cop, sparking a riot. Now what had struck many at the time as a provocation seemed like a prophecy.

“One of the biggest criticisms of 'Do the Right Thing' was that I did not provide the answer to racism at the end of the movie,” Lee said. “And here we are in modern-day America, pandemic America, and cities are up in flames. … I've just been taken away with Ahmaud Arbery, George Floyd, Breonna Taylor — I mean, it's like open season.”

Throughout his career, in films like “Malcolm X,” “Jungle Fever,” “Chi-Raq” and his 2018 best picture nominee “BlacKkKlansman,” Lee has probed the many ways in which America's original wound of racial injustice has continued to fester throughout its history. Now, in the midst of a staggering pile-up of current calamities, he is looking back at another turbulent time — the Vietnam era — in his latest feature “Da 5 Bloods” and once again examining how the past is never really past.

Available for streaming on Netflix on June 12, “Da 5 Bloods” centers on a group of aging African American vets who return to Vietnam to retrieve the body of their fallen squad leader (played by Chadwick Boseman) along with some treasure they buried in the jungle during the war. Cutting back and forth in time, the film explores the bond of brotherhood that brought the former warriors together and the lingering scars that threaten to pull them all apart (and have driven one of the veterans, played by Delroy Lindo, to support Donald Trump). Equal parts action thriller, buddy comedy, history lesson and cutting political commentary, it is hard to categorize as anything but a Spike Lee movie.

“It's a Spike Lee joint — you know it when you see it,” Lee said. “It's a gumbo. Those are the films I like. Why does something have to be just one thing? I don't put those artistic handcuffs on myself.”

Like many people, Lee, who is 63, has been thinking a lot recently about the parallels between the political and social turmoil of the late 1960s and today. Though he was still in elementary school through much of that era, his memories of it remain vivid.

“The Vietnam War was the first war that was televised into America's homes, and I saw that growing up,” he said. “I remember the 1968 Democratic convention in Chicago where Mayor Daley released all his police and they were cracking heads and these young Americans were yelling, 'The whole world is watching! The whole world is watching!' I saw the anti-war movement, the Black Panther movement, the women's movement. I remember all that stuff.” He laughed. “It was a great time to be young enough not to be drafted.”

Back then, Lee and his brother Chris loved to watch black-and-white World War II movies like “Is Paris Burning?” and “The Train,” movies that depicted soldiers, who were invariably white, valiantly fighting overseas for the cause of liberty and the American way. “My father would see us watching those films and he'd say, 'I want you to know black people fought in those wars too,' ” Lee said. “He was telling us to negate the false narrative we were seeing growing up, not knowing any better.”

“Da 5 Bloods” began its life as a script by Danny Bilson and Paul De Meo called “The Last Tour” about white soldiers returning to Vietnam to hunt for buried treasure. When Oliver Stone, who had been attached to the project, dropped out, Lee — who had made a film about African American Buffalo Soldiers in World War II, “Miracle at St. Anna,” in 2008 — came on board and refocused the script on the experience of black soldiers. Jumping off its “Treasure of the Sierra Madre”-style adventure plot, he saw an opportunity to tell a larger story about the way African Americans had been disproportionately drafted to fight in Vietnam while simultaneously having to fight for their own civil rights back home.

“There really hadn't been a major film about the black Vietnam experience, one that really explored what black veterans had gone through,” said “BlacKkKlansman” co-writer Kevin Willmott, whom Lee brought in to help retrofit the script. “The black soldier's story has been that he's fighting for rights that he doesn't have himself, with the notion that your participation and your patriotism will somehow earn you equality back home. What made Vietnam so different was that there's an actual black revolution going on back home and people are dying in that revolution while you're in the jungles fighting another struggle.”

Former Navy SEAL Harry Humphries, who served two tours in Vietnam, was brought on board the film as a military consultant. As a white veteran who had fought during the war alongside many African Americans, he felt a duty to help get their story right. “There's a mutual respect among warriors,” Humphries said. “Being a combat brother, if you will — pink, green, black or white — it's the same blood and the same mud. When you're in the battlefield, there is no black and white. In society, unfortunately, that doesn't seem to ring the same.”

In “BlacKkKlansman,” Lee drew a straight line from the story of a black police officer infiltrating the Ku Klux Klan in the 1970s to the racial divisions and resurgent white supremacy movement of the Trump era. Similarly, by making Lindo's character of Paul an embittered black Trump supporter in “Da 5 Bloods,” Lee sought to tie the sins of the past to what he sees as the sins of the present.

“We had to have some conflict within the group. After the war, everyone had gone their separate ways and had their own path. Kevin and I just thought it would be interesting if one of these cats supported Agent Orange, pun intended,” Lee said, using his nickname of choice for Trump. “Delroy tried to talk me out of it, but he knew it was the best thing for his character and the best thing for his film.”

Indeed, Lindo says he had major reservations about playing an ardent, MAGA-hat-wearing Trump supporter. “This individual is anathema to everything I believe and believe in, so it was a stumbling block,” said the actor, who had earlier worked with Lee on films like “Crooklyn” and “Malcolm X.” “I had to come to a certain understanding for myself of how Paul came to vote for that person. This is a man who has been betrayed by his country, cast aside and ultimately left with a feeling of profound disenfranchisement. And those were the elements that caused him to believe what this person in the White House was saying in 2016. That was the logic for me.”

Asked if he had spoken to any black Trump supporters to try to better understand their mind-set, Lee laughed. “No, I mean, not anybody that was drinking that orange Kool-Aid.” He paused. “At the same time, I think Joe Biden, that was a big mistake telling Charlamagne tha God that if you don't vote for me, 'you ain't black.' I don't think anybody who isn't black can tell black people what you are and are not. But that was a small misstep, and I think many people have spoken to Uncle Joe.”

As America grapples with profound political polarization, economic devastation and civil unrest, Lee — who released a short film this week called “3 Brothers” connecting the deaths of Radio Raheem, Floyd and Eric Garner — believes that the country has a rough road ahead. And, as has historically been the case, he fully expects that road will in many ways be roughest of all for people of color. It is in no way lost on him that, just as African Americans represented a disproportionate share of the fighting force in Vietnam, the impact of the coronavirus outbreak is being felt disproportionately by communities of color.

“Let me tell you a story,” Lee said. “I knew I was going to the Cannes Film Festival [in 2018] with 'BlacKkKlansman.' And I know anytime I go to Cannes, the world's journalists falsely look at me as a spokesperson for every single African American. I knew they were going to ask me questions about Agent Orange and what's happening in America. So I came up with this novel idea of trying to pick a film title that I felt would be short and to the point and I picked the film 'The Year of Living Dangerously.' That was 2018. But I'm going to extend that to 2020. This year has been horrific. This is going to go down as one of the worst years ever. And it's only May.”

Still, as grim as these times are, Lee is trying to maintain some optimism. He sees reason for hope in the racial diversity of the protesters on the streets across the country and in the fervor of their commitment to systemic change. And he looks forward to a wave of compelling art that he predicts will come out of the current turmoil, much as Marvin Gaye's classic 1971 album “What's Going On,” which supplies the musical backbone to “Da 5 Bloods,” spoke to the anguish of the Vietnam era.