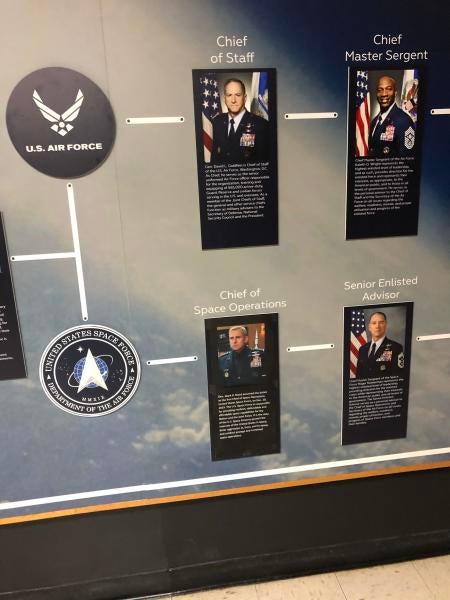 Steve Carell may only be the head of the U.S. Space Force in the upcoming Netflix series, but he's certainly making moves within the real-life U.S. military — sort of.

A photo that surfaced Tuesday on Reddit appears to show Carell's face plastered over the existing portrait of real-life Chief of Space Operations Gen. John Raymond in an installation on service leadership at the National Museum of the U.S. Air Force at Wright-Patterson Air Force Base in Ohio.

Based on the photo, it appears that someone used Scotch tape to install Carell's fictional Space Force chief, Gen. Mark R. Naird, in Raymond's place

“Gen. Mark R. Naird assumed the duties as the first Chief of Space Operations, United States Space Force, on Dec. 20, 2019,” the new bio reads. “The U.S. Space Force is responsible for providing resilient, defendable and affordable space capabilities for the Nation and the Joint Force. It is the duty of the U.S. Space Force to protect the interests of the Unites States in space; deter aggression in, from, and to space; and conduct prompt and sustained space operations.”

The original poster, himself an active-duty airman, told Task & Purpose that a friend who had travelled to the NMUSAF on official Air Force business had noticed Carell's face and shared the photo with him.

Unrelated, the installation also spells sergeant as 'sergent' for reasons that defy explanation.

“Having worked in (but not for) the museum for many years, I wouldn't be surprised if those employees don't notice that until the next change of command,” the original poster told Task & Purpose.

Fortunately for museum staff, they did notice.

The photo “was an attempt by museum employees at a creative and humorous prank” while the museum is updating exhibits during its time closed due to COVID-19, Rob Bardua, a spokesman for the National Museum of the U.S. Air Force, told Task & Purpose in an email.

“The Museum has updated its Air Force Leadership display to reflect the standup of the Space Force,” Bardua said. “The actual exhibit reflects Gen. John W. 'Jay' Raymond as the Chief of Space Operations; corrected the misspelling of the word 'Sergeant;' added the Civil Air Patrol crest (part of the original updated Department of the Air Force design); and removed the 'Reserve Component' phrase above the Air National Guard crest. “

Space Force finally blasts off on Netflix on May 29.

Update: 5.20.2020; This article has been updated with a statement from the National Museum of the U.S. Air Force.