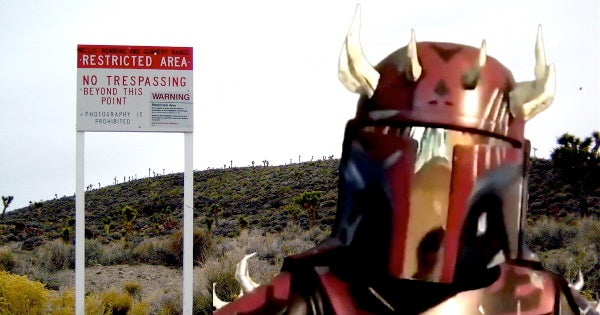 More than half a million people say they plan on storming the gates of Area 51 in September — and the Air Force is not impressed.

In response to the massively popular viral (and explicitly unserious) Facebook event “Storm Area 51, They Can't Stop All of Us,” the Air Force has issued an official warning to please, for the love of God, don't storm Area 51.

“[Area 51] is an open training range for the U.S. Air Force, and we would discourage anyone from trying to come into the area where we train American armed forces,” Air Force spokeswoman Laura McAndrews told the Washington Post on Friday. “The U.S. Air Force always stands ready to protect America and its assets.”

The Air Force always stands ready to protect America and its assets is fine PAO-speak, but in an era of Facebook-fueled nutjobs, such a statement is the Pavlovian equivalent of come at me, bro.

And while Air Force security forces likely are likely worried about other virgin-related security risks, there are certainly a few joke threats worth keeping a watchful eye out for — namely, this would-be intruder with some sick combo Darth Maul-Boba Fett armor:

i need everyone to see this video from the storm area 51 facebook group pic.twitter.com/lH7bIig6qN

“Storming Area 51? Now that's a real cause,” our armored hero said in a spectacular address to the nation last week. “That's where all us humans should be coming together. Let's put aside our our differences. Black, white, gay, straight, politics; none of that shit matters.”

“What truly matters is getting to Area 51, busting through their shit, and clapping some alien ass cheeks,” the modern-day Uncle Sam concluded. “That's what I stand for, and that's what I want you to stand for.”

Reminder: the warning signs surrounding Area 51 explicitly state that “use of deadly force is authorized.” Let's hope this booty-hungry insurgent's armor is better than the original Boba Fett for, uh, obvious reasons: