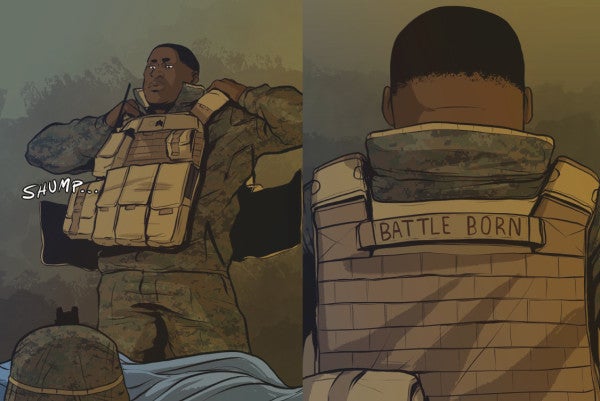 In the ten years since Terminal Lance first skated its way onto the internet it has introduced a generation of boots to the fine art of belligerence and how to find humor in the absurdity of Marine Corps culture.

Created by former infantry Marine Maximilian Uriarte, the popular web comic has taken readers to the hallowed grounds of off-base strip clubs and grimy tattoo parlors, to the tear-stained sands of Twentynine Palms.

For years Terminal Lance has offered a peek inside the deranged minds of drill instructors and distracted company commanders alike, and laid bare some of the Corps' most coveted secrets, like how nicknames are earned, and why your leave requests are always denied.

And in 2016, Uriarte shipped us off to Iraq on a poignant and relatable journey of self-discovery with The White Donkey. Now Uriarte is sending readers back to war, this time to Afghanistan with Battle Born: Lapis Lazuli.

The upcoming fully colored graphic novel follows a group of infantry Marines deployed to the mountain reaches of northern Afghanistan where they're led by Sgt. King, who Uriarte describes as a sort of Conan the Barbarian action hero, but in MARPAT instead of a loincloth.

With its overt themes of civilized versus savage, and written in the style of an 80s action-adventure story, Battle Born begins with King’s squad being dropped off by helicopters in the dead of night to a remote region with little exposure to American forces.

From the get-go, Battle Born feels familiar, especially to those who deployed to Afghanistan during the height of counterinsurgency operations in the early to mid-2010s. The Marines are sent in to disrupt the Taliban’s influence in the area, where they’ve taken over the gemstone market, and are instructed to build rapport with the local populace, despite their lack of understanding of customs or the language.

All you’d have to do is swap out the snow for sand and trade gemstones for bricks of opium and this could be any Marine’s deployment to Helmand province.

The idea for Battle Born emerged in 2015 while Uriarte was still working on The White Donkey, he said, and from the start he wanted it to take place in a part of Afghanistan most readers were unfamiliar with.

So he settled on Badakhshan province “which is the most mountainy northern part of Afghanistan, and I started researching it and I came across Lapis Lazuli, and stories about the Taliban taking over the gemstone market and things like that and I thought it was super interesting.”

Lapis Lazuli, which is the novel’s subtitle, is a deep blue semiprecious gemstone, for which Badakhshan is known.

“I remembered from my art degree that Lapis Lazuli used to be ground up into pigment to be used in ultramarine paint,” said Uriarte, who admitted that it was “a fun pun, too”

“It was something I hadn't seen a lot of people talk about,” he continued. “It was very understated. Most of the topics surrounding Afghanistan and Marines all take place in Helmand and it's all about other stuff, and I just thought the gemstone stuff was super interesting and I just became kind of obsessed with it.”

As for the characters, though King may be larger than life, one of the most appealing parts of Battle Born is that the other Marines feel as if they were plucked from a barracks on Camp Lejeune or Pendleton and dropped onto the page.

There’s Chavez, the unit’s sole female infantry Marine, as well as a by-the-book lieutenant whose interaction with his Marines seems limited to pre-mission briefs in the warm and cozy Combat Operations Center (COC).

Then there’s Forrest, the kind of guy who insists you call him “senior” lance corporal, and who was busted down and passed over as squad leader in favor of King. It's obvious why; He’s an asshole, a bully, and easily the last person you want calling the shots.

And that's what makes Forrest so believable, and his inclusion in Battle Born so necessary: Actual service members are not larger than life figures plucked from pulpy comic books. They're diverse, complex, and at times, flawed human beings who still have to find a way to work together, put up with each other's bullshit, and complete the mission at hand.

Task & Purpose had a chance to review Battle Born ahead of its July 28 release and recently spoke with Uriarte about the story’s origin, his time researching the book at Marine Corps Mountain Warfare Training Center in Bridgeport, California, and how Battle Born differs from his past works. (This interview has been lightly edited for style and clarity.)

Task & Purpose: Tell me about the genesis of Battle Born. Where’d the idea come from?

Maximilian Uriarte: I'm a huge fan of Robert E. Howard's original Conan The Barbarian literature, the original short stories. So the short stories, they were these really visceral action things, and they had these themes of civilized and savage.

So I thought of Battle Born at first as sort of a modern reinterpretation of Conan the Barbarian, and so it was like 'what would Conan be today,' and he'd be a Marine, a warrior. An adventurer, in a way. And I wanted to make a new kind of action hero, an almost mythological character in King.

King really became that kind of embodiment of the modern reinterpretation of [Conan].

Battle Born and The White Donkey are very distinct works — did you want to try something different with Battle Born, after your first novel?

The White Donkey really was very semi-autobiographical. It was a work of fiction, but The White Donkey was really the distilled emotion of what I learned and felt and took away from my whole Marine Corps experience.

Battle Born for me, even though it is in the Marine Corps setting, it's very different for me. It's pure fiction. This was an exercise in pure fiction writing, while obviously leveraging the experiences that I have had going to Iraq, etc., but for me, I really enjoyed being able to write about something that had nothing to do with me.

I felt like it was a step in a different direction.

It was also very different embodying a very different character in Battle Born than Abe, who was very much a stand-in for me in The White Donkey. Sgt. King is just a total polar opposite to that character.

Speaking of the characters, let’s talk about Chavez. She’s a female infantry Marine who’s deployed to Afghanistan with an infantry platoon — something that hasn’t actually happened yet.

I had my cast of characters — I had written shorts and stuff before — and Chavez was originally a male, and I had thought about it, and it was almost like a thought experiment.

It was like 'what if I made Chavez a woman? what would happen in the story? What would happen to the dynamic?’ And I really liked where it was going and I was like 'you know what? I'm gonna do it. I'm just gonna fuckin' do it.’

Why was it important for you to include that?

I'd say it was important to me because I'd never really seen it before, not in a realistic infantry setting. And women are now a part of the infantry so I felt like it would be disingenuous to not talk about that.

I wanted to have a female character, and I wanted to play with sexuality in that environment, like maybe she's not straight, which she's not in the story, and yeah, it was sort of my own thought experiment to see how the dynamics with a female infantryman could work and function in a platoon of male Marines and have it have nothing to do with romance, and not think about any of that nonsense that people bring up, as it relates to that whole subject.

And it just kind of worked.

I thought it was great, precisely because it felt like it was based on something that had happened — it played out the way you’d expect.

Yeah, exactly. I wanted to have a female character in there, but not draw too much attention to it, because of the fact that this is not her story. And I think that there is a really great story where the central protagonist is a female infantry Marine in a platoon, maybe a story for another time.

But this story is about Sgt. King and I wanted to focus on his emotional journey through these events.

Did you do research for Battle Born, and if so, what kind?

I did not go to Afghanistan to research this, but I did go to Bridgeport and I embedded with the Marines on the mountain there for a few days — three or four days — and it was really great.

I was stationed in Hawaii and I went to Twentynine Palms for my training and I really wanted to see and feel and absorb what Marines look and feel like in the snow.

What gear they're wearing, the jackets, the boot gator things, those are things that I did not actually think of prior to that trip, but when I went and saw how they were all dressed and the sort of loungewear that they wear when they're not doing missions; some wear their jackets, their jackets are open, some of them wear just the waffle top.

So it was a really cool first-hand experience seeing how Marines in a cold environment actually do look and behave and feel.

As far as research into Afghanistan, I wanted it to feel very authentic, at least as much as it could from someone who has not been there… The whole subject of Afghanistan, that's really what the story became about; colonialism and that shadow of American and British colonialism in Afghanistan in a kind of a historical context and tying that into American racism and these larger themes.

Really the driving theme of this is: What does it mean to be civilized, and is that an inherent virtue? And so, choosing Badakhshan province in Afghanistan, that's a very undeveloped area, and so that became a setting for the theme.

Tell me about the process of writing Battle Born.

Battle Born was hard work. It took blood and sweat and I wrote and illustrated, meaning I drew and I colored and I did literally all of it by myself — though there were a couple of other artists who helped me with a few pages — but like 99% of it I did by myself. It was a lot of work and I just hope that people appreciate it for what it is.

It was kind of presented and done with the intention of it being an action story, but I would say there's just as much going on behind the scenes of Battle Born as there is in The White Donkey, which had a lot of heavy metaphorical elements.

In Battle Born those are there, too, they're just a little more subtle because I wanted to tell a throwback 80s action story at the same time.

REVIEW: An interview with the comic mastermind behind 'Terminal Lance'