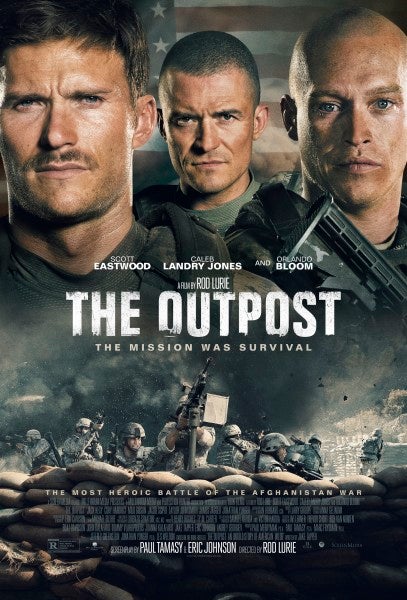 On Oct. 3, 2009, a handful of American soldiers beat back an overwhelming Taliban attack on Combat Outpost Keating, a remote and exposed position in eastern Afghanistan.

Though they ultimately won the day, the price was high: eight Americans were killed, and 27 were wounded. The battle resulted in two Medals of Honor, awarded to Staff Sgt. Clint Romesha and Spc. Ty Carter, as well as a deluge of awards for heroism, making Bravo Troop, 3rd Squadron, 61st Cavalry Regiment one of the most decorated units of the war in Afghanistan.

The Battle of Kamdesh, as it came to be called, is undoubtedly a story of bravery and sacrifice, but it's also one of hubris and command incompetence, that begs the question: Why were such extreme acts of valor necessary?

That story will be getting the silver screen treatment this summer, and we've got a first look at the film's new poster:

Directed by Rod Lurie, an Army veteran himself, The Outpost is based on the best-selling book of the same name by CNN anchor Jake Tapper.

The Outpost will be in theaters and available On Demand July 3, and stars Scott Eastwood as Romesha and Caleb Landry Jones as Carter — who also appears in the movie. They are joined by Orlando Bloom (Lord of The Rings, Pirates of the Carribean) who plays Capt. Ben Keating.

Fathom Events and Screen Media will release the film on 500 screens for a premiere event on July 2, followed by a theatrical rollout at 100 theaters across the country.

RELATED: The trailer just dropped for 'The Outpost' — a new movie about one of the bloodiest battles of the Afghan War