Tom Cruise has been shooting scenes to the next Top Gun movie in the central San Joaquin Valley. A photo was... 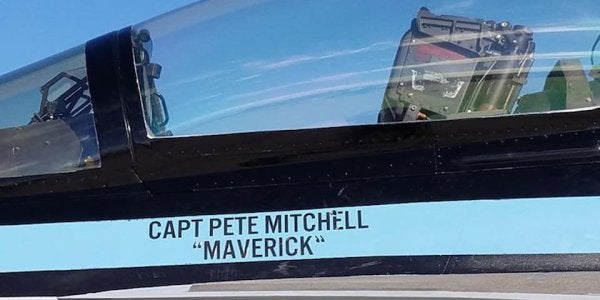 Tom Cruise has been shooting scenes to the next Top Gun movie in the central San Joaquin Valley.

A photo was snapped of the movie star at the Lemoore Naval Air Station this week, KFUN 92.5 FM radio host Joey Perez confirmed.

Perez posted the photo of Cruise shaking hands with Navy personnel on the “Eggs Bacon & Joey Morning Show” Facebook page, and the posting quickly spread with more than 2,000 shares in the first six hours.

“It’s a legit photo,” said Perez, who acknowledged that he did not take the photo but received it from a contact who’s “a military member.”

“It happened this week. The photo was taken on the air field in NAS Lemoore.”

When word spread that Cruise was on base, several people tried showing up to the naval facility to get a glimpse of the actor.

But no such luck. Even a local television crew in search of Cruise was denied access on base.

Only vehicles with military identification and those will military IDs are granted regular access on base.

Cruise, meanwhile, managed to keep his time in Lemoore brief – in and out of the town after filming Tuesday then back in and out again Wednesday, Perez said.

And Cruise did it without ever staying a night in Lemoore, the radio host relayed from his contact.

“He was kept on a side of the base that was very secure, only specific people had access to that area,” Perez said.

What was it like when Cruise wasn’t shooting footage but just lounging around at the base?

“He was walking around, giving people high-fives,” Perez said, “and saying hi to the guys that work the tower and other departments.”

In addition to Cruise, actor Miles Teller was at Lemoore NAS, Perez added. Teller might be best known for his role in the movie “Whiplash.”

Top Gun: Maverick is a long-awaited sequel to the 1986 blockbuster when Cruise first played the character Lt. Pete “Maverick” Mitchell.

Cruise will reprise his role as a titular pilot. Teller will play Maverick’s new protege and the son of Maverick’s original co-pilot, who was nicknamed “Goose.”

The movie was initially set to open in 2019 but the theatrical release has since been pushed back to June 26, 2020.