It may have the body of a Toyota Prius, but under its hood it has a red-blooded, all-American, gas-thirsty Dodge Hellcat engine. 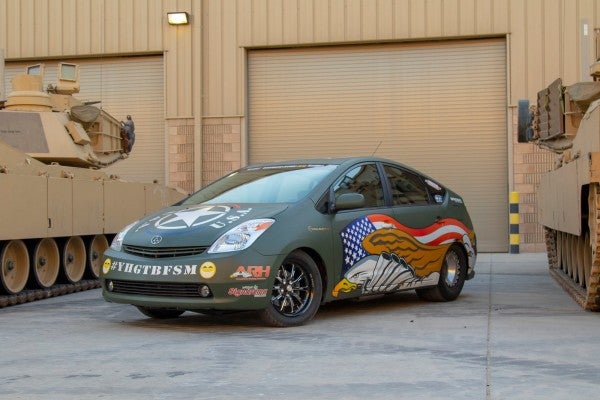 So in January, Filippides, 54, and his 28-year-old son, Louie, undertook a daring mission to get their custom-built muscle car across the Kuwaiti border and onto U.S. Army Base Camp Arifjan to entertain the troops.

The car, a Toyota Prius with a HEMI-engine dubbed PriuSRT8, is a bit famous. In 2017, it was on the show, “Jay Leno's Garage,” raced in Road Kill Nights in Detroit in 2018, and displayed at the New York Auto Show last year.

So creating the event, “A HEMI for Heroes,” to show the car to the troops seemed like a logical next step.

“I never served myself, but I’m a huge supporter of the troops,” said Filippides of Long Island. “There are a lot of military personnel who are car guys.”

But his timing couldn't have been worse. Nick and Lou Filippides landed in Kuwait a day before the Iranians bombed a U.S. base in nearby Iraq in retaliation for a U.S. military strike that killed Iranian major general Qasem Soleimani.

“We showed up in the thick of it.” said Filippides. “Everything was on the highest of alerts. A lot of people thought we were crazy for going there at all. But there was no looking back. The car was already there. My son and I said, ‘We’re gonna go do this.’ “

If ever there was an oxymoron, the PriuSRT8 is it.

It's the body of a Toyota Prius, the notorious hybrid car popular with environmentalists and movie stars. But under its hood is a red-blooded, all-American, gas-thirsty Dodge Hellcat engine.

The 6.2-liter V-8 engine from the factory makes about 717 horsepower. Too slow for Filippides, so he had it supercharged, boosting the horsepower to 1,100.

The car has a six-speed manual transmission and it's run a quarter mile in 9.25 seconds at 155 mph, he said. This PriuSRT8 goes from 0 to 60 mph in under 2 seconds.

“The car was built to be faster than anything — any Tesla or any car any manufacturer wants to bring out that is all-electric,” said Filippides. “We’ve issued challenges in the past to the Teslas of the world. We have a T-Shirt that says, 'Ludicrous speed is not fast enough.' “

He's referring to Tesla's “Ludicrous Mode,” which is a powertrain that gives a 10% boost to acceleration.

The idea for the car hit Filippides in 2016.

“It's because you’re saving the planet,” Filippides quips. “There was one point where there were seven Priuses that went by in a row doing about 60 mph and we're sitting there. I told my son, 'Lou, we need to get one of those cars and put a big motor in it and drive in that lane.' ”

The PriuSRT8 was born about nine months later. Now Filippides uses the car pool lane whenever he can get away with it, he said. Instead of the New York sticker that reads, “Clean Pass Vehicle,” his custom-made sticker reads, “Mean Ass Vehicle.”

He's never gotten a ticket, but he does get a lot of “thumbs up” from other motorists, said Filippides.

The car is deliberately tongue-in-cheek with decals such as an American flag, a bald eagle and the letters “U.S.A.” shrouding nearly every inch on the Japanese-car's body shell.

“These are two things that are never ever meant to be together,” said Filippides, laughing. “It’s a Toyota Prius, a car built to supposedly save the world, combined with an engine that has historic lore, the HEMI. We married these two things.”

Filippides grew up with a natural affinity for cars, especially fast, muscle cars. He opened his first business, a gas station and repair shop in Long Island, in 1989.

There, he taught himself general repair and high-performance work, which he did for 15 years before opening American Racing Headers in 2005. The company builds headers and exhaust systems for high performance cars often used for racing. It goes without saying, he is not a fan of electric vehicles other than for use in a congested metropolitan downtown such as Manhattan, he said.

“If you’re in the racing industry, is there any bigger threat to your business than electric cars?” said Filippides.

In Kuwait, of all places, many people there share Filippides' love of American muscle cars and indifference for EVs with gasoline costing an average of just $1.30 a gallon.

Drive through the Middle Eastern country sandwiched between Saudi Arabia and Iraq, and it is common to spot a Pontiac Trans Am, a classic Chevrolet Camaro, a mighty Ford Mustang and a vintage Dodge Viper on the roads, Filippides said.

Last year, as Filippides planned his trip, he got an idea: “What if we made this trip extra special and brought the PriuSRT8 there at the same time and we try to get the car on base and visit our troops?”

But just after finishing the paperwork to make that happen, the auto trade show went on hiatus.

Fortunately, Filippides had friends in Kuwait who “went to bat” for him and pulled the right strings to help get the car off the boat and into the country anyhow. It took nine months of planning and cost Filippides about $15,000 of his own money, but after five weeks at sea, the car landed in Kuwait.

“The rest of it was the logistics of getting it to the base,” he said.

But not so fast.

Filippides and his son landed in Kuwait on Jan. 7, four days after the fatal drone strike near Baghdad International Airport.

In retaliation, the Iranians bombed the U.S. base in Iraq on Jan. 8. The “A HEMI for Heroes” event “almost came to a screeching halt.”

The PriuSRT8 was already at the home of Filippides' friend in Kuwait, so there was no turning back. Filippides and his son had to hope things would settle down.

“We weren’t particularly nervous traveling around the country. People were talking about how Soleimani was taken out by our forces,” said Filippides. “But my son and I didn’t feel we were in harm’s way until we were heading to the base.”

That's because of news coverage relayed to them from family and friends back in the States, who were urging them to return home.

“But when you put in the kind of work it took to make this event a reality and it was on the edge of getting canceled it was pretty stressful,” Filippides said. “We wanted so much to get this in.”

Finally, on Jan. 12, the men transported the car on a flatbed truck about 45 miles from Filippides' friends home to the base camp for the event. Nearly 200 troops viewed the car that day and base commander Col. Ryan Worthan got to ride in it.

“We did some drive-bys, nothing too crazy,” said Filippides. “The car is unbelievably fast, but you’re not going to go that crazy.”

The troops appreciated the comedic value of the car and understood “why we’d put a big Hellcat engine in a Prius,” said Filippides. “It’s dressed up in military livery and that makes it that much more special.”

After the base visit, Filippides and his son secured authorization to drive the car on public roads. They got a police escort around the country to display the car, he said.

“When we didn’t, the local cops were told we’d be driving in certain areas,” Filippides said. “I can’t say enough good things about the graciousness of the Kuwaitis.”

Filippides and his son spent two weeks total in Kuwait.

“It was an unbelievable experience, it really was. No one can take (it) away from us,” said Filippides. “I'll talk about it with my grand kids. It made building this car satisfactory.”

He said authorities temporarily closed off the newly built Sheikh Jaber Al-Ahmad Al-Sabah Causeway so that Filippides could take photos of the PriuSRT8 on the bridge with Kuwait in the background.

He also took photos of the car in front of the Kuwait Towers, a group of three slender towers in Kuwait City, standing on a peninsula into the Persian Gulf.

“The real reason why we were there was to visit our service members at Camp Arifjan,” Filippides said. “Everything else happened on the fly. There were a lot of special permissions that happened while were there.”

The car is still Kuwait awaiting the paperwork and an importer to ship it back to Long Island. In the meantime, Fillippides now wants to do more events at military bases in the United States.

“We’re not just in it to enrich ourselves. We have a true sense of pride and we love our country,” Fillippides said. “We built this car to show that, even on the automotive side of the world, we can do something for this country.”