US Forces Japan to troops: Please don’t break quarantine for a one-night stand

Troops in Japan are apparently breaking quarantine for hookups 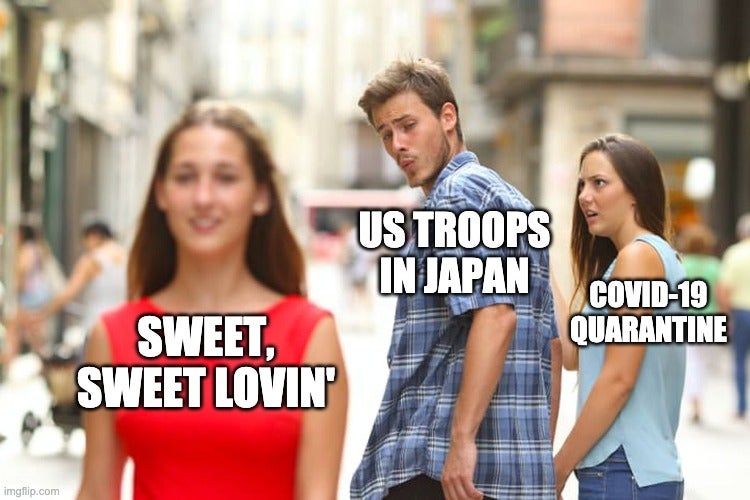 The leaders of U.S. Forces Japan are urging their troops to quit it, not hit it.

USFJ Command Chief Master Sgt. Richard Winegardner Jr. told the American Forces Network in a live-streamed interview that U.S. troops are endangering the rest of the force in Japan by leaving their mandatory quarantine in search of hookups at unauthorized locations like bars amid the novel coronavirus (COVID-19) pandemic, according to Stars and Stripes.

“I know commanders are getting upset with the lack of adherence,” Winegardner, USFG's senior enlisted leader, reportedly said. “Commanders are starting to get real serious about this.”

According to a July 29 press release, the Health Protection Condition Level in Japan is currently set at HPCON Bravo, though installations in Okinawa have elevated their level to HPCON C+ due to a COVID-19 outbreak among Marines stationed there.

As a result, U.S. troops who arrive to Japan are required to undergo a mandatory two-week “restriction of movement” to avoid potentially spreading the virus throughout the force.

But some troops', uh, needs are apparently too overwhelming to be ignored, and Winegardner stated that some troops are sneaking out of quarantine and “hooking up with folks” using dating apps like Bumble and Tinder, per Stars and Stripes.

It was unclear if he meant that U.S. troops were hooking up with other military personnel or with members of the community outside the installation.

“They are not supposed to go out, but that doesn't mean you go in,” Winegardner said.

Winegardner also said that troops not under quarantine are “getting popped left and right for going to places that they don't belong,” like bar districts.

Col. Thomas Matelski, commander of U.S. Army Garrison Japan, called out some members of the garrison in a video message last week who were “seen partying in off-limits parts of Tokyo,” Stars and Stripes reported.

“It seems like a few members of our team are starting to lose focus,” Matelski said.

Winegardner said that troops who have violated the rules have been knocked down two levels of rank and been tasked with extra duties, and fines.

He added that Japanese authorities are “looking into” any violations by U.S. personnel, per Stars and Stripes, and that the people testing positive for COVID-19 in the military community are primarily in their 20s and 30s.

So before you send — or respond to — that “you up?” text, know this: you could catch something a lot worse than feelings.