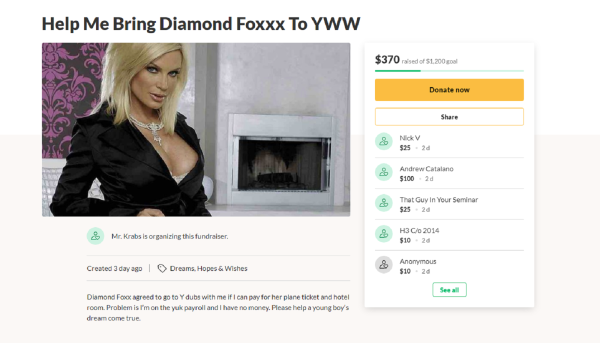 A cadet at West Point attempted to crowdfund money to cover travel fare and hotel fees so that his favorite adult film star could be his date to the service academy's annual winter banquet.

Over the weekend a United States Military Academy student launched a GoFundMe page titled “Help Me Bring Diamond Foxxx To YWW,” referring to West Point's Yearling Winter Weekend, which is held at the service academy in upstate New York.

“Diamond Foxxx agreed to go to Y dubs with me if I can pay for her plane ticket and hotel room,” reads the GoFundMe page. “Problem is I'm on the yuk payroll and I have no money. Please help a young boy's dream come true.”

A 2008 West Point graduate and former Army officer who donated to the cadet's cause told Task & Purpose that the page administrator was no longer accepting donations, which topped off at $370 dollars.

The reason? He apparently got called out for his creative use of crowdfunding.

A screenshot of the message was shared with Task & Purpose.

“This is a measure to protect the values of the West Point community, as well as keep me from walking 3 billion hours (which could be inevitable as of now.),” wrote the cadet, who has not been identified.

When asked for comment on the matter, the U.S. Military Academy Public Affairs Office pushed back on claims that the cadet was ordered to shut down the page, telling Task & Purpose that “the cadet promptly removed the page from the site after consulting with his peers.”

“Federal law prohibits members of the military from using their official positions for personal gain,” reads the West Point statement. “This prohibition extends to using or appearing to use ones military status to solicit gifts of money.”

While a lot of questions remain, like whether Diamond Foxxx actually agreed to attend — Task & Purpose could not manage to find a way to contact the pornographic film actress — a few things are certain. First, that this cadet is going to fit in perfectly if he ends up as a platoon leader with an infantry unit; and second, that he still desperately needs a date to the academy's winter banquet.