With the recently released trailer for "Midway" we might finally get a new World War II Navy movie that doesn't totally suck. But, that's still a very low bar. 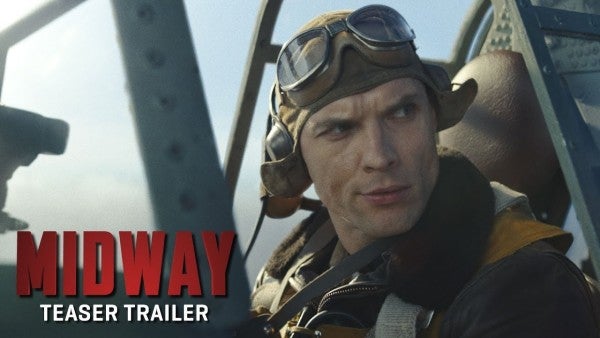 It's about time the heroism and sacrifice made by the sailors of the U.S. Navy during World War II had a recent tribute on the big screen that isn't just an action-packed overused-cliché fest — with an awkward love triangle jammed in — like 2001's Pear Harbor, or the also very bad USS Indianapolis: Men of Courage that starred Nicholas Cage.

It's too soon to know for sure if Midway, which hits theaters on Nov. 8, will successfully pay homage to America's sea service, or lean heavily on CGI gimmicks and nonstop explosions to make up for a lack of character development and reflection on the horrors of war.

But the recently released teaser trailer for Roland Emmerich's military drama certainly looks like it'll at least be better than the most recent additions to the World War II Navy genre.

The Battle of Midway was a turning point in the war in the Pacific, and the focus of 1976 film by Charlton Heston of the same name. Emmerich, who also directed Independence Day — if you want to get a sense of just how many explosions and dogfights we'll be getting — told USA Today that he's wanted to make a film about the battle for years, but after the star-studded disaster that was Pearl Harbor, he “had to wait.”

And though star power isn't enough to carry a movie — just like firepower doesn't make up for bad strategy — the cast of leading men in Midway is a who's who of acting chops (and inhumanly perfect chins) with Luke Evans as Lt. Cmdr. Wade McClusky, and Woody Harrelson as Adm. Chester Nimitz, along with Patrick Wilson, Dennis Quaid, and Aaron Eckhart.

The film will follow three story lines, which we catch glimpses of during the two-minute teaser trailer: The servicemen at sea during the fight; the code breaking which alerted American forces of an impending Japanese attack; and another subplot set in Japan, as they plan an attack on U.S. forces at Midway Atoll in the Pacific, according to USA Today.

The four-day sea and air battle ended on June 7, 1942, with the U.S. Pacific fleet successfully defeating the larger Japanese force — destroying four enemy aircraft carriers, and losing one of its own: The USS Yorktown. The victory at the Battle of Midway paved the way for an Allied offensive that continued into the Pacific through a deadly island-hopping campaign that took a heavy toll on American and Japanese forces alike, before finally ending with Japan's surrender on Sept. 2, 1945.

That ultimate victory may not have been possible had Japan's navy not been beaten back at Midway, due to the battlefield bravery and selflessness of the naval aviators and sailors who carried the day.

So will it take away our nightmares of the Batfleck love triangle that was Pearl Harbor? We can only hope.