Ryan Pickrell, Business Insider
April 16, 2019 at 11:54 AM news
An F-35B Lands On The USS Wasp In The South China Sea
content.jwplatform.com

Not only are U.S. Marines experimenting with a new aircraft carrier concept, but they are also taking a fresh look at forming "mini" carrier strike groups to fill in when the carriers are called away.

The capable fifth-generation F-35 stealth fighters are changing the way the service's big amphibious assault ships — the centerpieces of the so-called "gator navy" — go to war.

The Marine Corps is aggressively pushing ahead with the experimental "Lightning Carrier" concept, which involves arming the large flattops with a literal boatload of F-35B Lightning II Joint Strike Fighters to turn the traditional troop transport ships into light carriers capable of boosting the overall firepower of the U.S. carrier force. 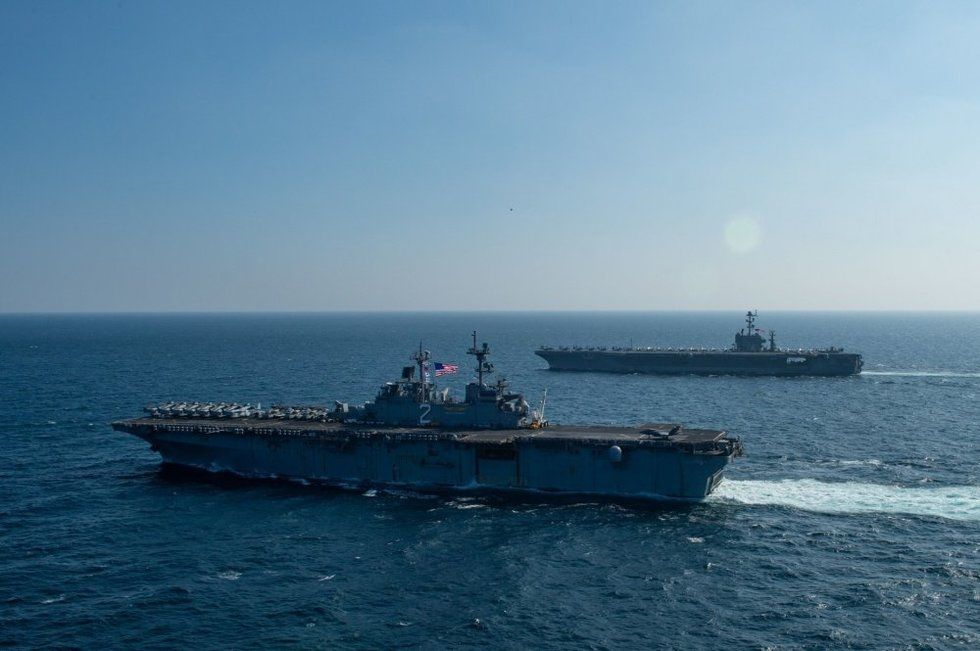 At the same time, the service and the U.S. Navy are looking at making changes to amphibious readiness groups (ARGs), transforming them into miniature carrier strike groups (CSGs). An ARG typically consists of an amphibious assault ship, an amphibious transport dock, a landing dock ship, and a contingent of Marine expeditionary forces.

"We're definitely changing the way amphibs are employed, especially on the blue side — we're no longer just the trucks that carry Marines that we used to be," explained Lt. Cmdr. David Mahoney, Amphibious Squadron 1 Operations Officer, USNI News reported Tuesday.

The amphibious assault ship USS Essex, the lead capital ship for the Essex ARG, sailed into the Persian Gulf last fall as the USS Harry S. Truman aircraft carrier and its escort ships, which were initially expected to deploy to the Middle East, sailed into the North Atlantic in support of NATO.

"There was no carrier in 5th Fleet, so a lot of the CSG-like duties we started taking over just because we had to," Mahoney explained. "The ARG is now becoming almost like a mini CSG." 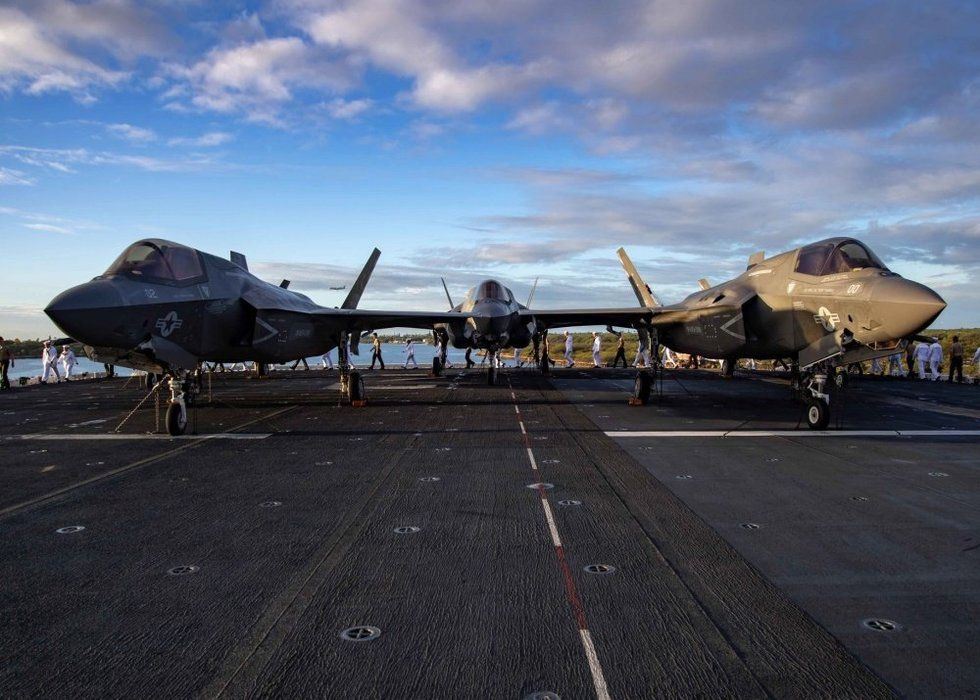 "You can see that layered defense," he said, pointing to the ARGs cooperation with destroyers and other warships, as well as the increased capability provided by the multi-mission F-35s with advanced stealth and a powerful sensor suite. "This is what has to happen as the carriers are being sometimes sent elsewhere because the needs are rising elsewhere."

The ARGs, especially in this time of renewed great power competition, are "definitely in high demand to fill those [CSG] roles as the Navy is spreading out further and further around the globe."

Marine Corps F-35Bs, short take-off vertical landing aircraft built for operations aboard the amphibs, flew into combat for the first time during the Essex ARG's deployment. Amphibious assault ships lack the catapults and arresting wires used on aircraft carriers, and only support these jump-jets and helicopters. 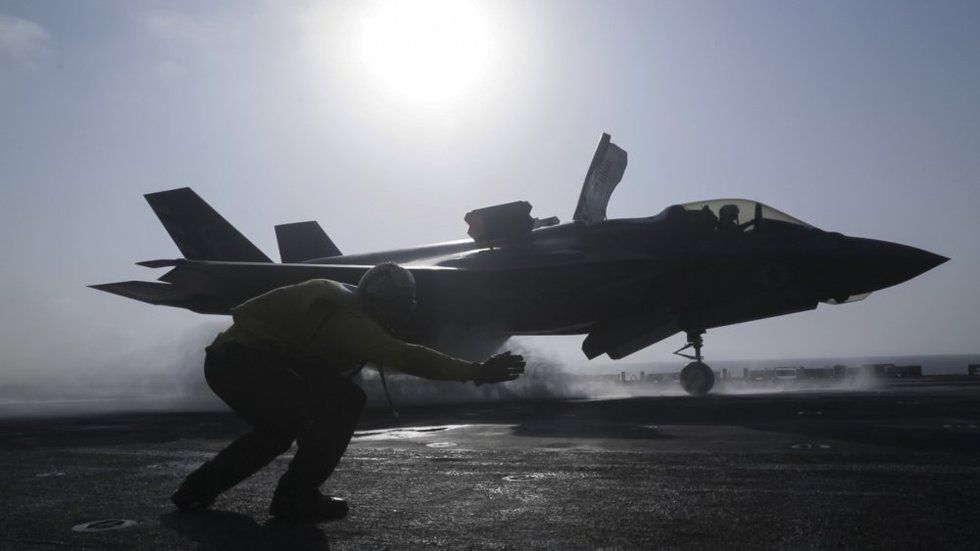 In February of this year, the F-35B achieved another first as fighters aboard the USS Wasp carried out simulated strikes in "beast mode," meaning it was operating with an external ordnance loadout, in the Pacific.

Recently, the Wasp sailed into the South China Sea with an unusually heavy configuration of at least ten stealth fighters, significantly more than normal, for joint drills with the Philippines. During the Balikatan exercises, the ship was spotted running flight operations near the disputed Scarborough Shoal as part of the light carrier experiment.: 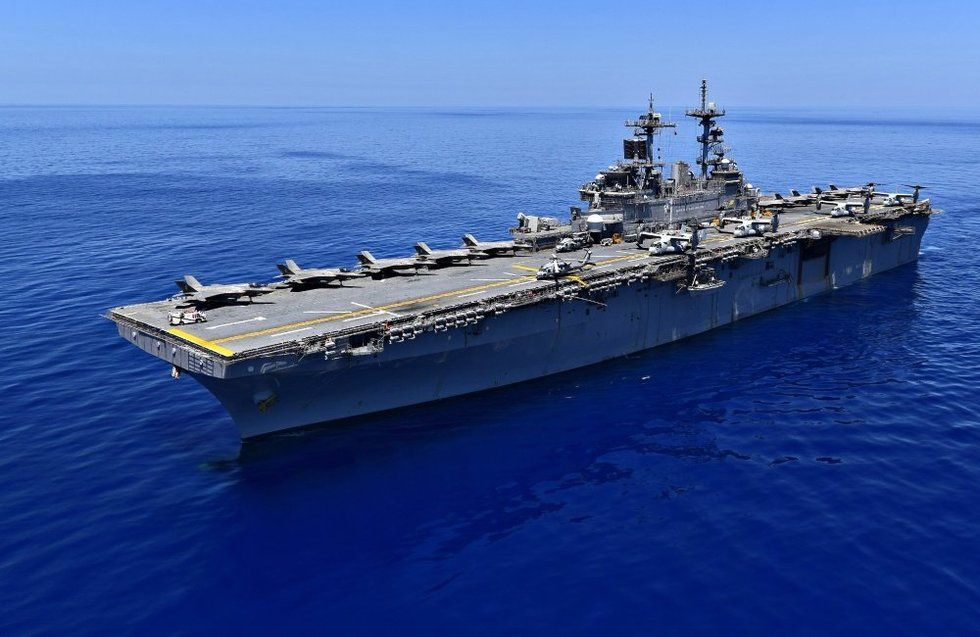 At the heart of the new "mini" CSGs is the "Lightning Carrier," an amphib loaded up with as many as 20 F-35s for carrier-like operations. This concept, which the Marines began experimenting with in 2016, is a rebranded version of the "Harrier Carrier" concept, a earlier variation with AV-8 Harrier jump jets that served the military well for decades.

"While the amphibious assault ship will never replace the aircraft carrier," the Marine Corps said in a 2017 report, "it can be complementary if employed in imaginative ways."

SEE ALSO: The US Sailed An F-35-laden Amphibious Assault Ship Through The Disputed South China Sea

WATCH NEXT: The Navy's F-35C is One Mean Fighter