76 years after 'the toughest battle in Marine Corps history,' the fallen are still returning home

Christopher Woody, Business Insider
November 23, 2019 at 01:19 PM History
Bodies sprawled on the beach of Tarawa atoll after a battle there in late November 1943. (Associated Press photo)

The 18,000 Marines and sailors who landed on the island of Betio in the Tarawa atoll in the Pacific Ocean early on November 20, 1943, waded into what one combat correspondent called "the toughest battle in Marine Corps history."

After 76 hours of fighting, the battle for Betio was over on November 23. More than 1,000 Marines and sailors were killed and nearly 2,300 wounded. Four Marines received the Medal of Honor for their actions — three posthumously.

Of roughly 4,800 Japanese troops defending the island, about 97% were killed. All but 17 of the 146 prisoners captured were Korean laborers.

"Betio would be more habitable if the Marines could leave for a few days and send a million buzzards in," Robert Sherrod, a correspondent for Time, wrote after the fighting.

The victory at Tarawa "knocked down the front door to the Japanese defenses in the Central Pacific," Adm. Chester Nimitz, commander in chief of the Pacific fleet, said afterward.

Hundreds were left unidentified and unaccounted for 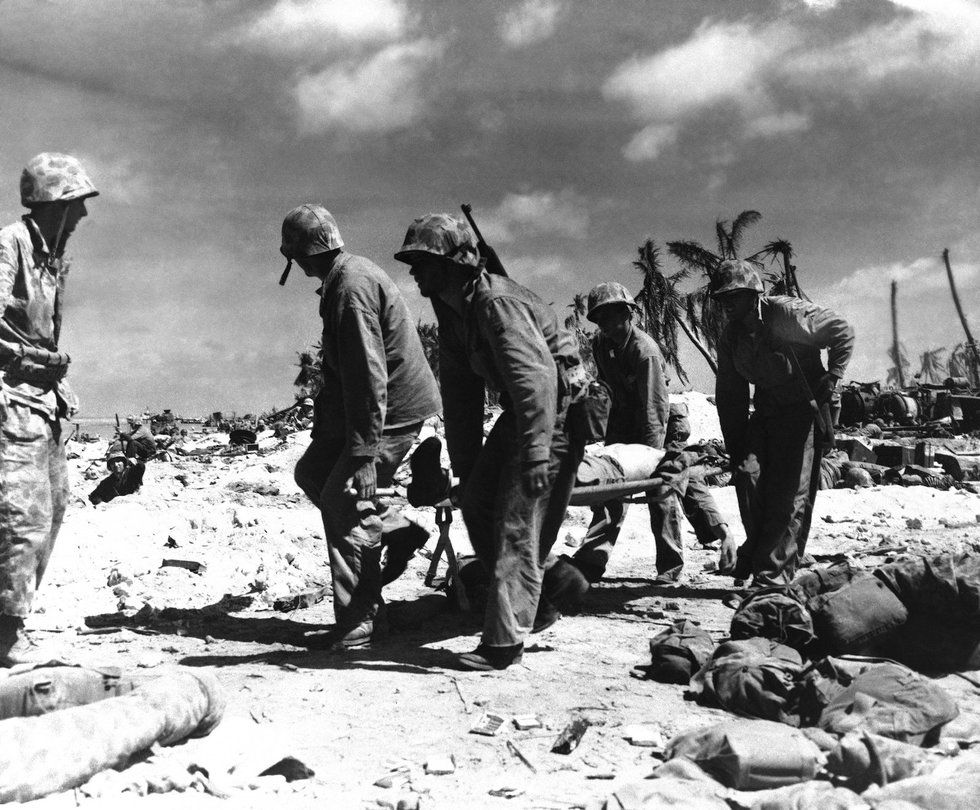 Four Marines carry a wounded Marine along the cluttered beach to a dressing station for treatment after fighting on Tarawa eased. (U.S. Marine Corps photo via Associated Press)

Because of environmental conditions, remains were quickly buried in trenches or individual graves on Betio, which is about a half-square-mile in size and, at the time of the battle, only about 10 feet above sea level at its highest point.

Navy construction sailors also removed some grave markers as they hurriedly built runways and other infrastructure to help push farther across the Pacific toward Japan.

The U.S. Army Graves Registration Service came after the war to exhume remains and return them to the United States, but its teams could not find more than 500 servicemen, and in 1949, the Army Quartermaster General's Office declared those remains "unrecoverable," telling families that those troops were buried at sea or in Hawaii as "unknowns."

Over the past 16 years, however, Betio, now part of Kiribati, has yielded some of the largest recoveries of remains of U.S. service members. 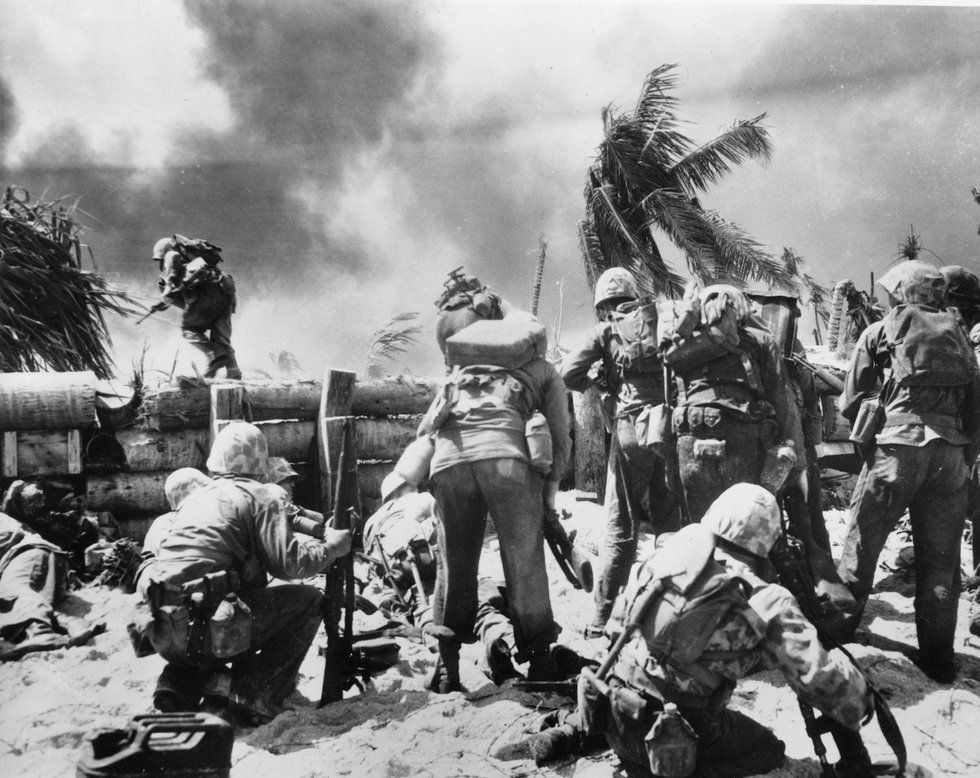 "History Flight was started in 2003, and we've been researching the case history of Tarawa since 2003, but we started working out there 2008," Katherine Rasdorf, a researcher at History Flight, told Business Insider on Thursday. "We had to do all the research and analysis first before we went out there."

In 2015, History Flight found 35 sets of remains at one site, including those of U.S. Marine 1st Lt. Alexander Bonnyman, Jr., who received the Medal of Honor for his actions during the battle.

In July 2017, the organization turned over 24 sets of remains to the Defense POW/MIA Accounting Agency for identification. 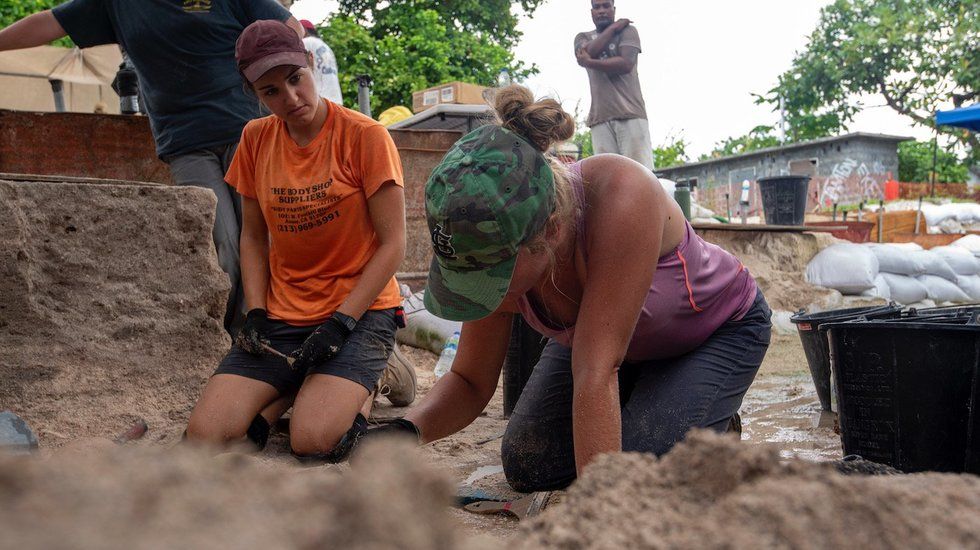 Osteologists with History Flight excavate a grave site from the battle of Tarawa at Republic of Kiribati, July 15, 2019.(U.S. Marine Corps/Sgt. Melanye Martinez)

This summer, the graves of what were thought to be more than 30 Marines and sailors killed during the last day of fighting were found on Betio.

Those are the largest recoveries of missing U.S. service personnel since the Korean War.

Using remote sensing, cartography, aerial photography, and archaeology, History Flight has recovered the remains of 309 service members from Tarawa, where the organization maintains an office and a year-round presence, Mark Noah, president of History Flight, told a House Committee on Oversight and Reform in a hearing on November 19.

Seventy-nine of those discoveries were made during the 2019 fiscal year, Noah said, adding that History Flight's recoveries are 20% of the DoD's annual identifications. 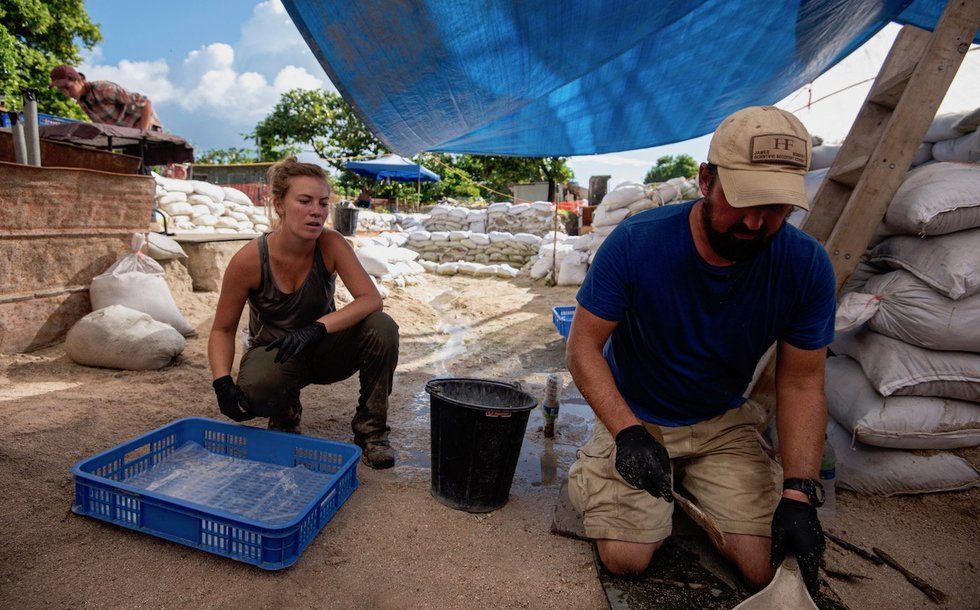 Archaeologists with History Flight excavate a grave site from the battle of Tarawa, in the Republic of Kiribati, July 15, 2019. (U.S. Marine Corps/Sgt. Melanye Martinez)

"Many of them were underneath buildings, underneath roads, and houses," Noah told lawmakers of remains on Betio, noting that they are often discarded, covered up, and accidentally disinterred — the first two Marines his organization recovered on Tarawa in April 2010 were displayed on a battlefield tour guide's front porch.

Today, 429 servicemen killed at Betio remain unaccounted for, Rear Adm. Jon Kreitz, deputy director of the DPAA, said when at least 22 servicemen returned to the US in July.

Hero's welcome for those returned home

Those discoveries have allowed the sailors and Marines who died at Tarawa to finally return home.

Joseph Livermore, a 21-year-old Marine private when he was killed by a Japanese bayonet on November 22, 1943, was given a hero's welcome in his hometown of Bakersfield, California, where his remains were buried on November 15. 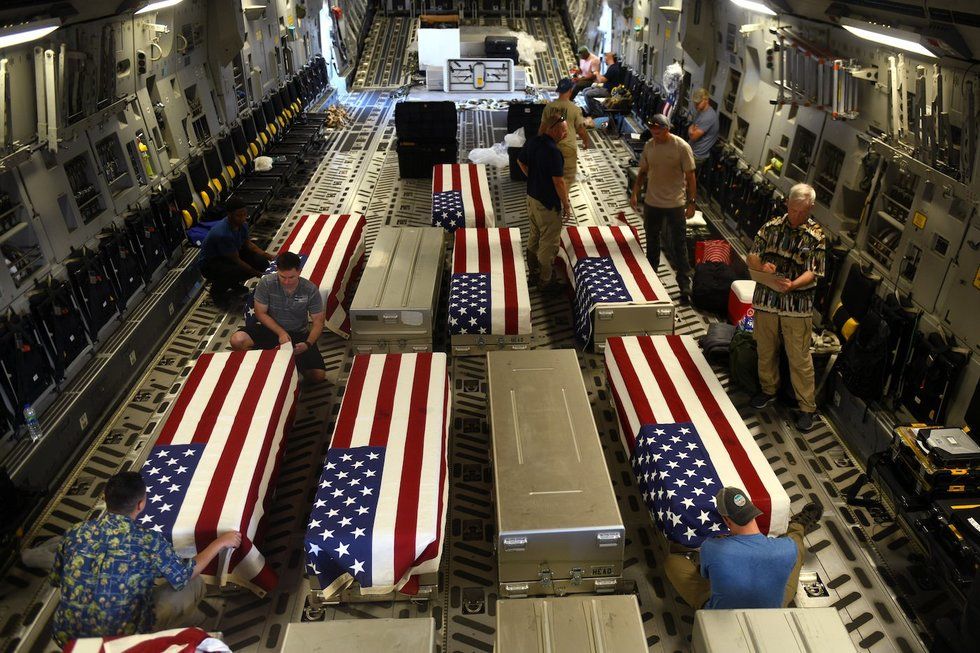 Pvt. Channing Whitaker, an 18-year-old from Iowa killed in a Japanese banzai attack on the second day of the battle, was buried with full military honors in Des Moines on November 22. His remains returned to the United States in July.

Other Marines killed at Tarawa who were recovered after the battle have also been identified in recent months.

In History Flight's experience, more than 50% of those recovered had living brothers, sisters, and children at their funerals, Noah told lawmakers this week.

"The recovery of America's missing servicemen is a vital endeavor for their families and for our country. What we are accomplishing in recovering the missing is putting a little bit of America back into America," Noah said. 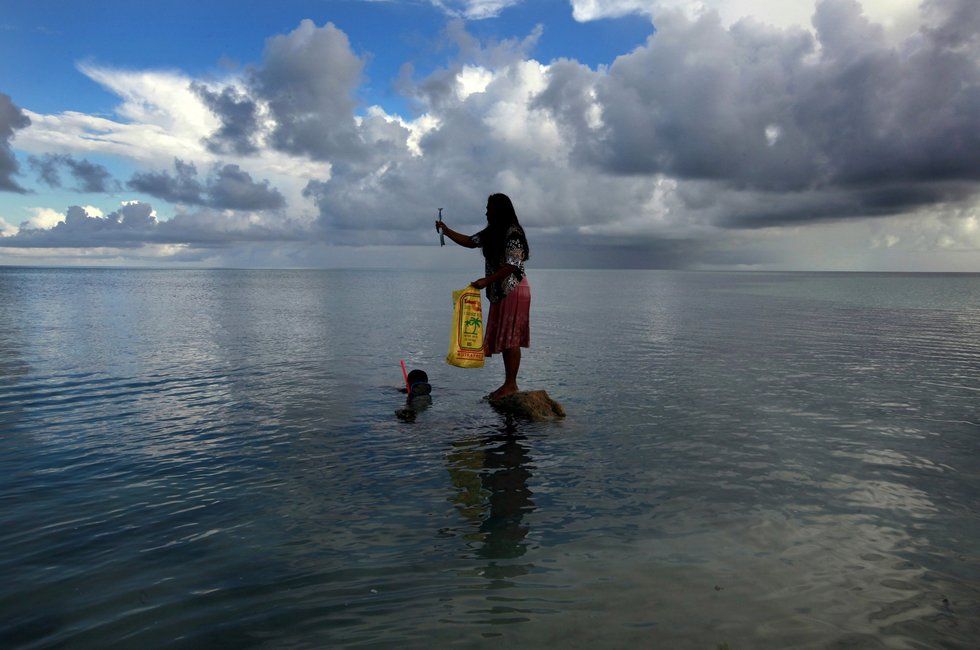 Binata Pinata stands on a rock with a fish her husband, Kaibakia, just caught in Bikeman islet, off South Tarawa in Kiribati, May 25, 2013.(Reuters/David Gray)

While hundreds of servicemen likely remain on Betio, environmental conditions there may soon make finding them even harder.

Kiribati, one of the most isolated countries in the world, is also one of many Pacific Island nations likely to be uninhabitable in a few decades due to the effects of climate change.

More than half of Kiribati's nearly 120,000 residents live on South Tarawa, just east of Betio. Rising sea levels are a particular threat to densely populated country. Exceptionally high tides and sea-water incursions threaten the fresh water under the atolls.

Many of the graves located by History Flight are below the water table, meaning workers had to pump water from the sites each day to excavate. 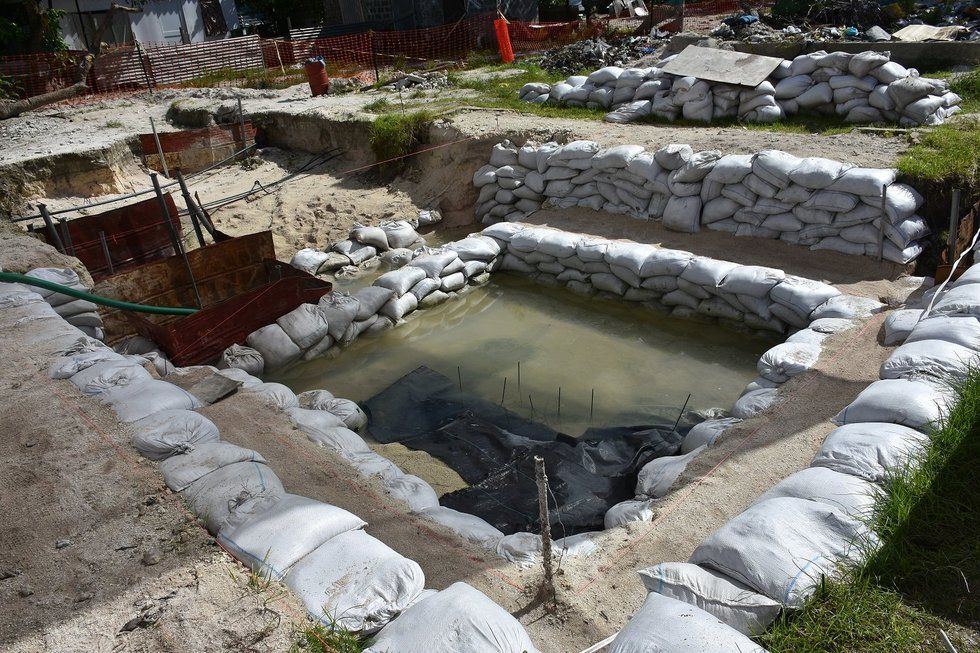 Graves of U.S. servicemen under the water table in Tarawa, during excavation by History Flight, June 1, 2019.(Associated Press)

"When it's rainy season, it's very difficult to do archeology, because the locations fill with water and we have to come up with drainage solutions that are not impacting the highly populated areas and ... reroute [the water] to places where it's not infringing on their clean drinking water," Rasdorf said.

History Flight's day-to-day work has not been greatly affected by changing environmental conditions, Rasdorf said, but others in Kiribati have called for drastic action in response to the threat of climate change.

His purchase was decried by some as a boondoggle and alarmist, and his successor took office in 2016 planning to shift priorities. But Tong continues to sound the alarm.

"The Republic of Kiribati," Tong said in an op-ed he coauthored last year, "is facing annihilation."