9 Restaurants With The Best Military Discounts

Your military ID card comes with certain perks when you’re living stateside. In fact, a number of restaurant chains across... 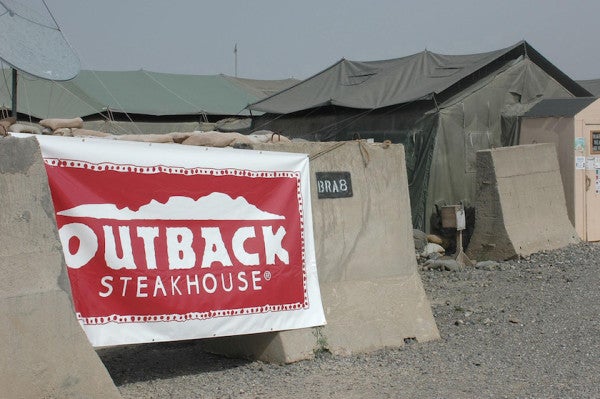 Your military ID card comes with certain perks when you’re living stateside. In fact, a number of restaurant chains across the country offer awesome discounts for service members, veterans, and military families when they want to go out to eat. All you need is a valid military ID, and some places will slash 10, 20, or even 50% off your bill.

Here are 10 places that offer kickass military discounts, in case you don’t feel like cooking tonight.

A favorite with more than 2,000 locales, Applebee’s is a family grill restaurant. The chain is famous for its “2 for $20” deal, which allows you to get one appetizer and two full entrees for $20. The Applebee’s slogan is “eatin’ good in the neighborhood,” and it largely rings true in smaller communities.

Chevy’s Fresh Mex is a Tex-Mex restaurant known for its fajitas. The chain boasts a colorful, lively atmosphere, and has excellent deals on tequila drinks. Seriously, the margaritas are massive. Chevy’s are a little but harder to find, but there are a number near bases in Texas and Virginia.

Discount: Chevy’s offers 20% off for all service members, veterans, police, and firefighters with valid military ID.

If you’re looking for dessert, Dairy Queen is the answer. It has soft-serve ice cream, burgers, fries, and barbecue. It’s perfect in the summertime when you’re looking for a place to hang out and eat ice cream. But what it’s really known for is the Blizzard.

Discount: Dairy Queen’s discount varies, but it can be as much as 50% off with valid military ID.

Though it’s more sparsely located than some of the other chains, the Hard Rock Cafe is internationally known for being a rock and roll-themed restaurant with great burgers. The restaurants are usually decked out with cool paraphernalia.

Well, we all know why service members and veterans go to Hooters … the wings! Jokes aside, the food here is actually really good. They have 11 different wing sauces to choose from. In addition to good wings and a military discount, Hooters also participates in charity work and Veterans Day specials. This may not be the most family-friendly place, or maybe it is, depending on your family.

Discount: Hooters offers 10% off on Mondays with valid military ID.

Another family favorite, Johnny Rockets is a 1950s-themed diner with all the works — malted milkshakes, flavored sodas, and burgers and fries. The cheese fries are where it’s at though — piled high with cheddar, bacon, chives, and sour cream. Also, the chain’s discount is probably the best one around. You might hate yourself for eating here, but at least your wallet won’t.

Discount: Johnny Rockets offers up to 50% off with valid military ID.

Do you like the idea of eating steak in a saloon? Lone Star is that place. It’s great if you’re feeling like you just need a steak tonight. It has an everyday discount, but also a military special on Mondays.

Discount: Lone Star Steakhouse offers20% off on Mondays, and 10% all other days of the week with valid military ID.

You really can’t go wrong with Outback. The Australian-themed chain has awesome steak. Plus, who can resist a bloomin’ onion? The company is also a huge military supporter, not just in discounts, but also at bases overseas. The chain often does large-scale donations of food to troops.

Schlotzsky’s is well-known deli that serves delicious sandwiches, pizza, and salads. The sandwiches are served on fluffy, fresh-toasted bread, and jam-packed with the meat of your choosing.

Discount: Schlotzsky’s will give 30% off with valid military ID.