The Air Force’s persistent retention problems have driven the branch to offer a variety of enticements for pilots and airmen... 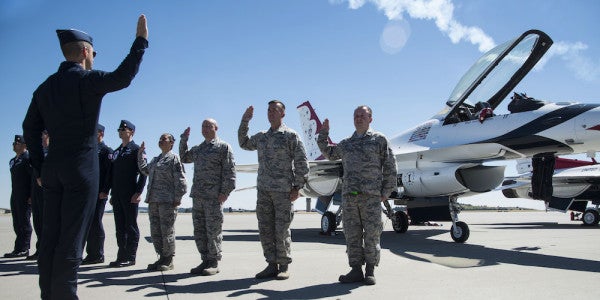 The Air Force’s persistent retention problems have driven the branch to offer a variety of enticements for pilots and airmen to stay in uniform. The latest of these attempts may seem counterintuitive, but there’s a lot of information backing it up: expanding opportunities for sabbaticals from active duty for as long as three years, through the Career Intermission Program.

“Designed to allow Airmen the flexibility to manage short-term conflicts between service responsibilities and life priorities, CIP offers Airmen the opportunity for a one-time temporary transition from active duty to the Individual Ready Reserve,” according to an Air Force release. “The participation period is a minimum of one year, not to exceed three years, and provides a mechanism for seamless return to pre-CIP active-duty status.”

Three years off? Who wouldn’t want to put their military career on hold for three years to go to school or raise a family? And that’s what the Air Force is banking on.

“[It] affords an avenue to meet the changing needs of today‘s service members,” Adriana Bazan, military personnel specialist at the Air Force Personnel Center, said in the release. “This work-life flexibility initiative will enable the Air Force to retain talent, which reduces cost and adverse impacts on the mission.”

Air Force officials are hoping that the offer will allow the service to be more competitive when recruiting new airmen and addressing attrition.

“Airmen in the program receive a monthly stipend equal to two-thirtieths of their basic pay and retain full active-duty medical and dental benefits for themselves and their eligible dependents,” according to the release. “They’ll also be able to carry forward their leave balance as long as it doesn’t exceed 60 days.”

There is fine print in this contract, of course: Any airman who applies for a sabbatical and is deemed eligible must serve two months on active duty for every month of leave taken. And time spent off does not count towards retirement. It’s also a fairly exclusive program: Since 2014, only 108 airmen have been deemed eligible to participate; extra consideration is given to members with missionary or humanitarian obligations, as well as members with spouses in another service, who may face conflicts in reconciling duty stations.

In addition to extending possible leave times, the Air Force is expanding to three annual windows for airmen to apply to the program: Cycle A is from April 1 to May 13; Cycle B runs from Aug. 1 to Sept. 12; and Cycle C covers Dec. 1 to Jan. 12.

This year only, however, Cycle B will open Sept. 22 through Oct. 31, because of alterations to the program — good news for those of you looking to take the next three years or so to kick back, jump into a college program, or take on parent duty.

This is just one of several new or expanded incentives the Air Force is offering to try to retain service members. Chief of Staff Gen. David Goldfein and Air Force Secretary Heather Wilson stated earlier this year that the Air Force was short by 1,544 pilots during fiscal year 2016, and Military.com reported that the service “stands potentially to lose 1,600 pilots who are eligible to separate from the service in the next four years.” Maintainers are in short supply, too. And Federal News Radio reported that the Air Force wants to increase its active duty ranks from 321,000 to 325,100 in 2018 — that’s 4,000 new recruits on top of a projected loss 57,000 separating or retiring airmen.

Some pilots are now eligible for a possible $25,000 per year commitment bonus. Fighter pilots, who may be able to extend their career for nine additional years, could rack up an astounding $225,000 in retention bonuses.

If you play your cards right, you could potentially make a quarter of a million dollars and take three years off. Now we know why it’s called the Chair Force.