Hey Soldiers, Get Your Paperwork In Or You Could Lose Out On Your BAH

The Army’s new regulations regarding basic allowance for housing paperwork, meant to crack down on fraud, could end up screwing... 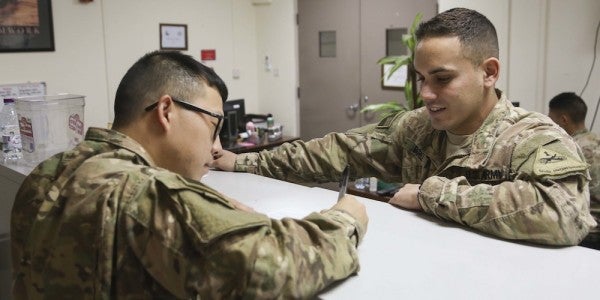 The Army’s new regulations regarding basic allowance for housing paperwork, meant to crack down on fraud, could end up screwing thousands of soldiers out of additional BAH funds for dependents, a branch spokesman told Military.com on Aug. 31.

An Aug. 16 memo from Army Deputy Assistant Secretary For Manpower And Reserve Affairs Raymond Horoho, first obtained and published by Army W.T.F! Moments on Aug. 30, set a hard deadline of 60 days for active-duty soldiers to supply the branch with missing paperwork affirming the existence of their dependents in order to keep their additional BAH funds allocated to service members

Requests for missing paperwork aren’t unusual: Army Times notes that the branch made a similar request of some 140,000 soldiers who lacked complete documentation in 2016. When confirming the authenticity of the memo to both Army Times and Military.com, Army spokesman Lt. Col. Randy Taylor told the latter that there are currently around 60,000 soldiers at risk of losing their extra BAH funds due to incomplete applications.

In addition, the memo calls for annual resubmissions of important paperwork, with a second 90-day grace period to adjust their BAH levels accordingly in the Army’s Personnel Electronic Records Management System. That means marriage licenses, birth certificates, and even alimony agreements — anything that proves a soldier’s paycheck is not entirely his or her own.

A soldier’s failure to upgrade paperwork will result not just in a reversion of BAH funds to the level appropriate for a single, unattached individual, but likely trigger a fraud investigation by the Army Criminal Investigation Command, the branch says that any potential criminal investigations will be conducted “at the local level based upon the facts involved on a case-by-case basis,” Taylor told Army Times.

Here’s to paperwork: the cause, and solution to, all of life’s problems.