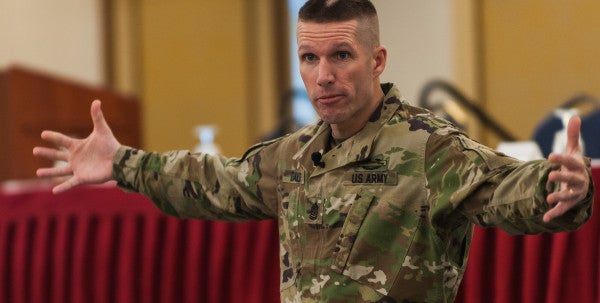 The U.S. Army's top enlisted leader is trying to build momentum for an effort to create two new pay grades — E-10 and E-11 — to compensate senior noncommissioned officers as they take on more command responsibility.

Commissioned officers receive a pay increase each time they are promoted, all the way up to four-star general.

Sgt. Major of the Army Daniel Dailey discussed the effort at a recent conference in Texas but would not comment for this article.

“Unfortunately, at this point, there is nothing to announce,” said Master Sergeant Tyrone C. Marshall Jr., the SMA's spokesman, responding to questions from Military.com. “The mention of possibly expanding anything was all simply pre-decisional discussion at the SMA's annual conference in El Paso, Texas.”

While the effort is being discussed behind closed doors, it's generating a high level of interest on social media.

Creating two new enlisted pay grades would be an uphill battle, as other services would likely make similar moves — and such an effort would require support from leaders at the Pentagon and lawmakers on Capitol Hill.

If approved, it would represent a major cultural shift in addressing a long-standing pay disparity between the enlisted and officer classes.

Upon graduating the U.S. Army Sergeant Major Academy, NCOs are promoted to E-9 and assume their first sergeant major position, working alongside a major or lieutenant colonel.

“From that point on, he gets elevated in responsibility at higher levels of command, and he never gets another pay raise for his grade … and officers will get recognized when they move up with a different rank and different pay amount,” said Command Sgt. Major John Raines, the command senior enlisted leader for the Mississippi Air and Army National Guard.

CSMs do receive a monthly stipend when they work with general officers.

“I make an additional $150 a month by working at a two-star level,” Dailey said, adding that the stipend increases by $75 for each star. “That money is just while I am in the position, so when I retire that money will not be calculated into my retirement.”

To Raines, it will be difficult to get sergeant majors to get behind a pay raise for themselves when there are so many other priorities to meet the needs of soldiers.

“It's very outdated, but nobody ever wanted to tackle it or start raising issues about pay because then you get criticized; then you are a troublemaker,” Plunk told Military.com.

Stephen Dailey retired from the Army Reserve as a command sergeant major in 2003 and remembers talk of an effort to give CSMs a bump in pay when they moved into brigade, division and corps level positions.

“If they haven't adopted the additional pay for division CSMs … and the corps CSMs, I'd say this is a route they are going to want to take,” said Dailey, who is no relation to SMA Dailey.

“From being in Operation Enduring Freedom with 700 troops under me, it kept me busy with discipline and keeping my NCOs in line and all that stuff. I can't imagine what taking care of 3,000 or 12,000 would be like.

“In my opinion, the CSMs that are above what I was deserve a pay-grade bump.”

But creating new enlisted pay grades is no small feat. After Army approval, the effort would have to win support from all the services, Secretary of Defense James Mattis and Congress.

“There are a lot of needs in the services; you prioritize those needs and I just see that it would be hard pressed to make it on top of the priority list.”