Editor’s Note: This article by Amy Bushatz originally appeared on Military.com, the premier source of information for the military and veteran … Continued 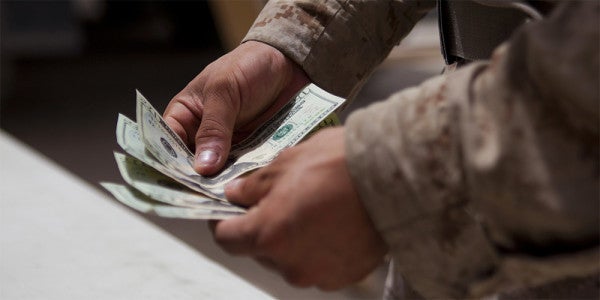 If Congress does not pass a spending bill by midnight Friday, the U.S. government will once again shut down until a deal is reached.

President Donald Trump has expressed support for a Republican-backed continuing resolution that would extend government funding through Feb. 16, but it hasn't passed yet.

How would a shutdown impact military and retiree pay and benefits or payments from the Department of Veterans Affairs?

Although the Defense Department has not yet released specific guidance for 2018, it has released such information in the past. Here's what we know:

Active-duty troops, as well as Guard and Reserve members, would not get paid during a shutdown unless Congress passes a separate piece of legislation to do so.

That means if a shutdown starts Jan. 19 and stretches into the next several weeks, troops' Feb. 1 pay will be delayed.

Military retirees would still receive their regular pension checks in the event of a shutdown, as would those receiving a Survivor's Benefit Plan (SBP) payment.

That's because those funds are paid from a different account that is not impacted by the annual funding bill Congress has yet to pass.

Newly bereaved family members would not receive the Pentagon's $100,000 death gratuity during a shutdown or military-funded travel to Dover Air Force Base, Delaware, or elsewhere for the dignified transfer or military funeral or memorial.

Servicemembers Group Life Insurance (SGLI) payments, however, would not be affected.

Like retiree pay, VA disability pay and GI Bill payments are both funded through different legislation than is at risk on the Hill. For that reason, those checks are unlikely to be affected by a brief shutdown.

However, during the last shutdown in 2013, VA officials warned that if the closure extended beyond several weeks, disability checks were unlikely to go out to more than 5.1 million veterans.

In the past, military families about to make a permanent change of station(PCS) move or troops preparing for temporary travel (TDY) were told that their travel would be on hold until after the shutdown.

Although guidance has not yet been issued this year, the same would likely be true.

Medical care on base

In the past, the DoD has warned that while military hospitals would stay open for emergencies, inpatient care and acute care, all other types of care — including elective procedures and primary-care appointments — would be canceled.

In the event of a shutdown this week, you should contact your clinic or hospital to find out more about your scheduled care.

In the past, on-base military child care centers have stayed open on a case-by-case basis, depending on whether they were seen as “essential.” The same would likely be true this year.

Department of Defense Education Activity (DoDEA) schools stayed open during the 2013 shutdown, and the same would likely be true this year.

On-base schools that are operated by local school districts also would not be affected by a shutdown.

Military exchanges will remain open during a shutdown thanks to the way they are funded.

Stateside commissaries, however, would likely close as they did in 2013, while those overseas would remain open since they are considered “essential.”

MWR activities would likely temporarily shutter on a case-by-case basis due to how those services are funded.