Editor’s Note: This article by Brendan McGarry originally appeared on Military.com, the premier source of information for the military and veteran... 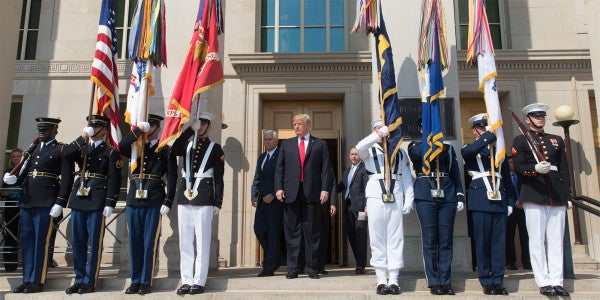 President Donald Trump on Thursday set the military pay raise at 2.1 percent and the civilian pay raise at 1.9 percent for 2018.

The change to monthly basic pay is scheduled to take effect Jan. 1, 2018.

The levels are consistent with the president's federal budget request for the fiscal year beginning Oct. 1, though they're less than troops and federal employees were expecting based on the formula called for under federal statute.

By law, military pay hikes are supposed to track wage growth in the private sector as measured by the government's Employment Cost Index (ECI).

In a release from April, the Labor Department's Bureau of Labor Statistics noted, “Compensation costs for civilian workers increased 2.4 percent for the 12-month period ending in March 2017.”

In his letter to House Speaker Rep. Paul Ryan, a Republican from Wisconsin, Trump noted his “alternative plan” for the pay raises.

“I am transmitting an alternative plan for monthly basic pay increases for members of the uniformed services for 2018,” he wrote.

“I strongly support our men and women in uniform, who are the greatest fighting force in the world and the guardians of American freedom,” the president added. “As our country continues to recover from serious economic conditions affecting the general welfare, we must work to rebuild our military's readiness and capabilities.”

Trump said, “Accordingly, I have determined it is appropriate to exercise my authority under section 1009(e) of Title 37, United States Code, to set the 2018 monthly basic pay increase at 2.1 percent. This decision is consistent with my fiscal year 2018 Budget and it will not materially affect the Federal Government's ability to attract and retain well-qualified members for the uniformed services.”

Congress can still override the levels for troop pay, which is set to match the current year's raise. However, lawmakers have struggled to come to an agreement on many aspects of the federal budget, so whether they will do so isn't clear.

House Republican leaders have proposed giving service members a 2.4 percent pay raise in the next calendar year, while some Democrats have pushed for a 2.9 percent boost.