5 Questions I Still Have After The First Debate

Donald Trump was ill-tempered and dogged in the defense of his positions, while Hillary Clinton was the polished politician that... 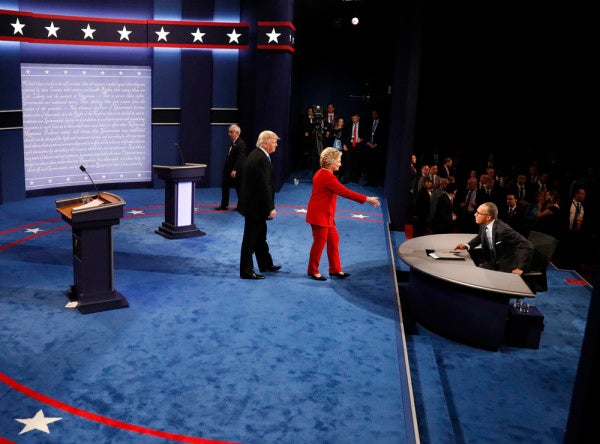 Donald Trump was ill-tempered and dogged in the defense of his positions, while Hillary Clinton was the polished politician that we know she is without ever stepping outside of her comfort zone. Presidential hopefuls know that non-specific answers given while commanding the room, and the conversation, are the keys to winning a nationally televised debate.

Even Lester Holt, the moderator of the first iteration of this years presidential debates, started off the evening by saying, “I don't expect this to cover all the issues of this campaign tonight, but I remind everyone there are two more presidential debates scheduled.” No one expects every single topic to be addressed in a 90-minute debate that is rampant with interruptions by the candidates, but I personally still feel let down as I ponder what I just witnessed along with an estimated 100 million other Americans.

I’m eager for more topics to be introduced by the moderators, more specificity from the candidates, and less vitriolic behavior during the course of the debate. The goal is, of course, to do our duty as citizens and make the most educated decision possible this November. That being said, there are a few issues that I think are especially pressing, and deserving of specific answers in one of the next debates. I avoided the questions regarding Trump’s tax returns and his position as a “birther,” or Clinton’s e-mails and her response to the Sept. 11, 2011 attacks in Benghazi, Libya. Those topics have been well covered at this point, so I chose to focus on policy positions that absolutely affect the direction of this country. As voters, we must demand nothing less than educated, truthful, and well thought out answers — even if we don’t agree with them.

The ever-increasing national debt is a pressing national security issue at this point, with no end in sight. The annual budget deficit has been reduced in recent years, which is a step in the right direction toward fiscal responsibility, but I feel that the national debt is of greater concern than the deficit at this point. Any solution to this must obviously involve the gridlocked legislative branch, but it is only through them that we can solve this problem. How would each of these candidates as president be able to work with Congress to stop the rising national debt?

In a time of increasing terrorist threats and emboldened “frenemies” such as China and Russia, defense spending is an important facet of our budget that ensures the safety of Americans at home and abroad. It is also very expensive, with the defense expenditures topping $600 billion in 2015. In what ways would each candidate reduce defense spending without sacrificing readiness, and without cutting pay and benefits for the individual service member?

I’m not sure whether Trump was insulting hackers or the overweight in his comments regarding cyber security Monday night, but either way, the obesity epidemic is something that needs to be addressed in this country. Low-income families in particular are disproportionately affected by this epidemic, which has been attributed to low quality food being cheaper and more easily accessible than healthier options. Obesity has also become a national security issue due to its impact on the pool of physically capable men and women able to join the armed forces, according to recent reports. What steps would Trump or Clinton take to make quality food more accessible and lower the rate of obesity for Americans?

Many around the world consider the United States of America a beacon of hope and a destination for opportunity. As such, we have been and continue to be the world’s melting pot by assimilating people from all races, religions, and nationalities into our national identity. A porous border and an influx of illegal immigration have put pressure on the local, state, and federal government, though. Many attribute this in large part to how difficult and bureaucratic legal immigration is. Which of these candidates would be able and willing to streamline legal immigration for those who wish to come to this country and become citizens?

We have many roads that are crumbling or constantly under construction, our electrical grid is woefully out of date, and our water lines are down right dangerous in some parts of the country. There are no cheap alternatives for low and middle class families to travel, such as a modern train system. Finally, our country lags behind many post-industrial nations in regards to our internet technology, which is imperative for class mobility in an increasingly technology-based economy. Most of us can agree that these are problems that won’t magically solve themselves, but who will make improving the infrastructure a priority? And how will they work with the legislative branch to accomplish this?

Many may not have the same questions as me, or consider these questions to be a priority over others that were not adequately covered (or covered at all) during the first debate. The importance of this discourse is not necessarily what the questions are, but that we are asking them and demanding good answers. Regardless of what side of the aisle you fall on, the office of the president deserves to be inhabited by a thoroughly vetted leader who can carry the immense responsibility of the office with dignity and character. What questions do you feel are still unanswered?