Editor’s Note: The following story highlights a veteran at Blizzard Entertainment. Committed to including talented members of the military community... 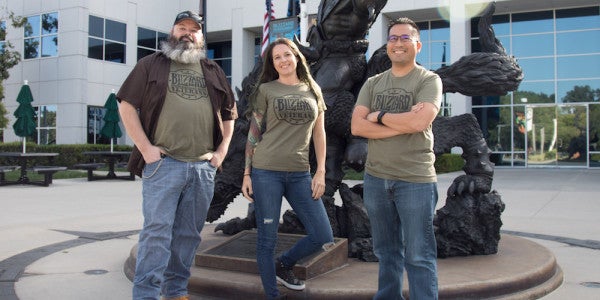 Transitioning to the civilian workforce can be a daunting thought for service members of any generation. The camaraderie of serving in uniform, regardless of rank, is something hard to match outside the military. But for those servicemen and women looking to transition to an employer who values military service and encourages veterans, look no further than Blizzard Entertainment.

Widely known as the entertainment and software home of games like World of Warcraft, Overwatch and StarCraft, Blizzard isn’t just a home to gamers, developers and artists, it’s a place that values diversity, empowers its employees and encourages growth. Blizzard’s mission statement isn’t just a bunch of words – they truly embody it and live it in every possible way. And that is something that veterans love about working at Blizzard.

Byron Salvatierra, a Blizzard employee for five years, is the coordinator for the Blizzard Veterans Group.

“At Blizzard, we’re told to embrace our inner geek, whether that’s tech or game-related or not,” says Army veteran and IT – Service Operations Manager Byron Salvatierra. A Blizzard employee for five years, Salvatierra is the coordinator for the Blizzard Veterans Group. “We started as a small group of military veterans looking for that camaraderie you find in the service and we started an email distribution group within the company,” he says. The regular emails evolved into regular meetings and eventually launched as a formal group with a name, logo and mission statement. The mission of the veterans group is encouraging social interaction, promoting awareness of veterans’ issues within the Blizzard community and facilitating mentorship among veteran Blizzard employees is the mission of the veterans group.

“I saw that that the company leadership really valued what our group was doing when my boss told me to skip a recurring meeting that conflicted with our veterans meet up so that I could attend the veterans meeting,” said Salvatierra. For some, their “inner geek” is their military service. By championing not only the veterans group, but also all diversity groups, Blizzard encourages and fosters an environment where its employees find their passion and bring it to work. In doing so, they help create a “fun, creative culture that is uniquely Blizzard Entertainment.”

Lacey Davidson, an Air Force veteran who's worked for eight years at Blizzard Entertainment, says her voice and perspective are highly encouraged.

As any good military leader knows, it’s important to hear the voices and opinions of your troops. And similarly, Blizzard encourages its “employees to speak up, listen, be respectful of other opinions and embrace criticism.” According to U.S. Air Force veteran and 8-year Blizzard employee Lacey Davidson, her voice and opinion are not only valued, but also highly encouraged.

“Being a female AND a veteran allows me to bring a different point of view on certain topics and I’ve always found my Blizzard leadership and colleagues welcoming and accepting of new ideas and different concepts,” she says. And in doing so, it creates an environment and company culture that allows and encourages its employees, especially military veterans, to feel valued and respected.

“The military develops a feeling of family,” says Davidson. “And I immediately felt welcomed by my coworkers into the Blizzard family.”

Thomas Blue, Principal Technical Artist, is a former Army mechanic who is responsible for designing Blizzard’s Veteran logo and t-shirts.

All good companies today invest in the professional development and growth of their employees. But beyond offering a plethora of courses at Blizzard University, Blizzard employees are highly encouraged to reach across departments and seek mentorship to expand their horizons. One of the missions of the Blizzard Veterans Group is to mentor members looking to pursue new opportunities.

Lacey Davidson transitioned to new opportunities through mentorship and development within Blizzard that were built upon her professional foundation as an Air Force financial management specialist. Thomas Blue, Principal Technical Artist, previously served as an Army vehicle mechanic before transitioning out of the service and working in the gaming industry.

“Everything I’ve done has contributed to where I am today. As a mechanic I worked in the motor pool of a transportation company, diagnosing and fixing problems to keep drivers on the road getting their jobs done. Similarly, as a tech artist, I support a team of artists, keeping barriers to success out of their ways so they can focus on making great art,” says Blue.

His advice to veterans seeking employment or service members preparing to leave active duty: “You probably didn’t know much of anything about your MOS prior to raising your hand, but you were trained to be successful, and you can do that as a civilian too. Be willing to take classes, courses, and invest time into learning and growing in your area of interest.” And if you’re lucky, you have an employer like Blizzard Entertainment that not only values and champions your service, but also respects and listens to your voice and encourages your growth and professional development.

If you’re a veteran seeking employment or a service member leaving active duty in the near future, check out the job openings available and join the Blizzlife.

Want to see more? Check out their Life at Blizzard Instagram channel for an inside look at Blizzard teams, disciplines, and culture.