Camp Nelson National Cemetery will mark a first when it holds a public memorial service Saturday for a military working... 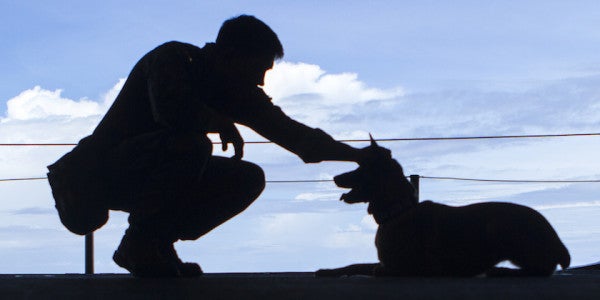 Camp Nelson National Cemetery will mark a first when it holds a public memorial service Saturday for a military working dog who served two tours in Iraq, sniffing out explosive devices.

Iireland, a female Belgian Malinois who died in August, will receive full military honors, including a 21-gun salute and the playing of taps, said Shawnda Ebert, a chief petty officer in the U.S. Navy Reserve who sought permission for the service.

Military working dogs “are veterans,” Ebert said. “They deserve the same treatment as our brothers and sisters who fought over there.”

Iireland couldn’t be buried at the national cemetery six miles south of Nicholasville. She is buried on a family farm, Ebert said.

Iireland and her handler, Joshua Sutherland, a Marine, were in Iraq in 2007 and 2008. “She was an explosive-detector dog, so any kind of explosive that could possibly be there, it was her job to sniff it out,” Ebert said.

When Sutherland came home, he was able to adopt Iireland. “These dogs become part of your family,” Ebert said. “They’re with you in times when your family can’t be. They’ve seen the same stuff you’ve seen.”

Ebert, who has participated in numerous military funerals, was asked by McCaw Veterinary Clinic in Nicholasville to see whether it was possible to have a military service for Iireland at Camp Nelson.

She said cemetery personnel were “completely” cooperative in working with her.

The 2 p.m. service, open to the public, will be held at a pavilion on the grounds of the national cemetery.

“We’ve got various canine units that are coming to support it, such as various police departments and military units,” Ebert said. The cemetery doesn’t allow pets onto the property, so the canine units “have to be a service dog,” she said.

American Legion Lexington Man o’ War Post 8 will provide the rifle detail for a gun salute. The Camp Nelson Honor Guard will have its horse-drawn caisson and will fire a cannon. The Marine Corps Military Police Company Alpha of Lexington will assist with flag-folding. Ebert’s husband, James, a lieutenant in the Navy Reserve, will play taps on trumpet.

Sutherland and Dr. Elizabeth Banks, the veterinarian who treated Iireland in her last days, will speak during the service.

Ebert said she couldn’t predict how many people will attend the service, but there has been attention through word of mouth and social media.

“The community has been extremely supportive of this,” she said. “I believe we’re going to have a rather decent, if not large, turnout just because this is so unique.”

Ebert cautioned that people should not bring their pets. “If I have not contacted them, they really shouldn’t be bringing their pets, simply because we’re having artillery fire and things of that nature. We don’t need dogs getting distressed, because we don’t need anything disruptive.”