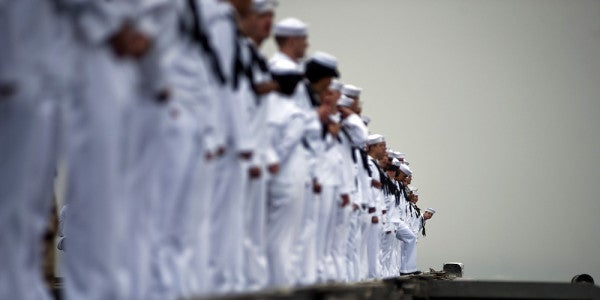 The Navy has decided to bring back its 241-year-old job ratings system, officials said Tuesday, reversing a decision at the end of September that prompted widespread outcry and even had the White House weigh in.

A formal announcement is set for Wednesday at 8 a.m. East Coast time.

The restoration of Navy rating titles will be announced in a Navy administrative message signed by Chief of Naval Operations Adm. John Richardson.

The service still plans to modernize jobs in order to make career paths more flexible and make it easier to transition to civilian work. But the initial plan that replaced all 91 historical ratings, including jobs like yeoman, boatswain's mate, and hospital corpsman, with alphanumeric codes, has been scrapped.

In the planned remarks, Richardson credits sailors who spoke out during meetings and town hall forums with convincing Navy leadership to walk back the ratings decision.

“The feedback from current and former sailors has been consistent that there is wide support for the flexibility that the plan offers, but the removal of rating titles detracted from accomplishing our major goals,” Richardson wrote in the message. “Furthermore, there has been a solid body of thoughtful input that pointed out that there is a way to have the benefits of the rating modernization program without removing rating titles.”

He also said the reversal was an example of the “fast learning” he has promoted within the Navy since he became the service's top officer.

“The Design for Maintaining Maritime Superiority states that our most junior teammate may have the best idea and that we must be open to capturing that idea,” Richardson wrote, citing a Navy document published in January. “We have learned from you, and so effective immediately, all rating names are restored.”

Many questions have yet to be answered. A Navy official told Military.com that the service is still determining the best way to allow sailors to hold multiple job titles, a key selling feature of the plan to substitute alphanumeric codes for ratings. Other elements of the original plan, including the potential redesign of ratings badges, will be decided at a future date, the official said.

Related: White House Won’t Back Down On Navy Ratings Changes Despite Petition »

Chief of Naval Personnel Vice Adm. Robert Burke, who had been tasked with promoting the job titles overhaul to the fleet over the last three months, said in a statement that the Navy still had decisions to make about rating names.

The Navy first began to review its ratings system earlier this year at the behest of Navy Secretary Ray Mabus, who ordered the Marine Corps and Navy to ensure their job titles were sufficiently gender-neutral as previously closed jobs opened to women. In response, the Marines announced in June they were changing 19 job titles to remove the word “man,” while the Navy expanded its review to the system itself.

“As we move forward into the execution stages of the rating modernization, more and more sailors will have multiple occupational skill sets or ratings,” Burke said. “Before we get there, we will need to tackle the issue of managing rating names. We will involve sailors throughout the Fleet and leverage the Rating Modernization working group to figure out how to best do that.”

Until recently, Navy leadership showed no signs of wavering on the decision to do away with ratings. A WhiteHouse.gov petition to bring back the ratings system racked up 100,000 signatures in just under a month, triggering a response from a White House official, who acknowledged the Navy's love of tradition but supported the ratings plan.

The author of the petition, former Navy operations specialist Dave Weeks, told Military.com he had launched it in response to community outcry from those who felt that their rating was a key part of who they were in the Navy.

“A lot of people like myself really loved their job, and the title that went along with it was part of your Navy identity,” he said. “And besides that, when people start off in the Navy and strike into a rating, it is a huge sense of pride for them to be able to put on a rank badge that has a rating symbol on it.”

In November, Coast Guard Commandant Adm. Paul Zukunft distanced himself from the decision to remove ratings, telling Military.com his service had briefly considered it, but determined such a move would cause “chaos” in the ranks.

Earlier this month, Richardson suggested at an all-hands call in Fallon, Nevada that he had underestimated the backlash that would result when the Navy got rid of ratings, Navy Times reported.

“As we looked at rating modernization effort over the past few months, we saw that we could still achieve the positive results we want without changing rating titles right now,” he said. “However, modernizing our industrial-age personnel system in order to provide Sailors choice and flexibility still remains a priority for us. Our personnel system has not fundamentally changed since the 1970s, and just like our ships, aircraft and weapons systems, it needs updates to keep pace with a rapidly changing world.”