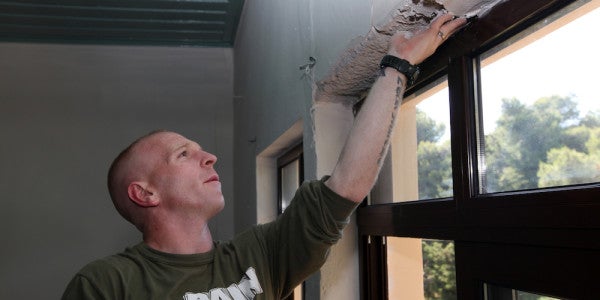 Uncovered by a series of Freedom of Information Act requests filed by The San Diego Union-Tribune over the past four months, Faulkner’s court-martial case shines the spotlight on a Marine Corps trying to balance a distinguished military career forged during long years of war with the crimes he committed after coming home.

He’s begging for clemency. His commanders are trying to kick him out after 15 years of service and what he said was a botched suicide attempt.

“Something happened to me. I was a guy who went into Iraq and I came back a different man,” Faulkner, 34, told the Union-Tribune during a telephone interview. “I don’t even know how many firefights I’ve been in, but I do know what happens to a man when he sees what are called ‘collateral effects’ on people who didn’t deserve it.”

Following a plea agreement, Faulkner was convicted by a military judge on Jan. 9 at Camp Pendleton for beating his then-8-year-old daughter, for violating a military protective order barring him from visiting his wife and for being drunk and disorderly during the incident that occurred on base last spring.

He was busted down to sergeant and sentenced to 89 days in the brig. Another day tacked on his sentence would have reduced him to private, the lowest rank in the Corps.

Because he’d already had spent 199 days in pretrial confinement, he walked out of the courtroom a free man.

Faulkner returned to his room at Wounded Warrior Battalion West, the special unit at Camp Pendleton where Marines and sailors suffering from wounds, injuries, mental illness and other ailments go to heal.

The Corps estimates that 90 percent of patients today won’t be mended for battle but instead return to their hometowns.

Faulkner is awaiting disability ratings by the military and the Department of Veterans Affairs for combat post-traumatic stress disorder, traumatic brain injury, a fractured spine and other ailments.

Although Wounded Warrior officials are trying to administratively separate him from the Marines on an other-than-honorable discharge, he’s submitted a clemency plea to senior commanders at Camp Pendleton and Quantico, Va., near where his wife and daughter relocated.

It would allow him to leave with an honorable discharge after learning a trade. He takes his service dog with him to welding classes.

When the brass open his service record book, they’ll see the page marred with his court-martial conviction but also entries for a Navy and Marine Corps Commendation medal, numerous other awards for outstanding military service and two combat action ribbons tied to brutal fighting in Iraq and Afghanistan.

A combat engineer, he said earning those two ribbons changed a young “motivated Marine” who enlisted out of patriotism and marched into 15 long post-9/11 years of fighting wars, returning from wars and then training for more wars.

He described watching artillery rounds that were intended to hit oil drums during the 2003 Battle of Nasiriyah instead tear apart civilians, and that moral wound of war widened over the years the more he thought about it.

He blames part of his struggles on that and other bad days in Iraq and Afghanistan, but said he can’t hide behind them.

“I refuse to call myself a victim,” Faulkner said. “I’m not a victim.”

Throughout a pair of interviews, he consistently praised both the Marine Corps and its leaders, including those at the Wounded Warrior unit who charged him last July and December for a series of incidents dating back to the summer of 2016.

Military prosecutors claimed that he repeatedly disregarded an order issued by a superior commissioned officer to stay at least 100 feet away from an unidentified woman and her house.

She wasn’t his wife. He said that she was the spouse of a fellow Marine and he was only trying to be a friend.

Prosecutors sought to paint him as a stalker, accusing him of peeping into her windows, snooping to see if her doors were secured, jimmying a lock with a bobby pin to enter when she wasn’t there and rifling through her underwear, but he insisted that none of those events happened. Prosecutors dropped the charges.

Instead, Faulkner admitted to striking his then-8-year-old daughter in the face and squeezing her neck during a springtime incident. It occurred when he violated a separate military protective order to stay away from his wife, records show.

Both orders had been issued by Wounded Warrior commander Lt. Col. Stephen “Slade” Mount, himself a highly decorated Marine who lost an eye to an insurgent bullet while flying his attack helicopter during the Battle of Najaf in 2004.

Mount, 44, did not return messages from the Union-Tribune.

In a 2016 interview with the newspaper at Camp Pendleton, Mount said that his wounds helped him empathize with struggling Marines. At the same time, he needed to hold service members — even senior leaders with multiple combat tours — accountable for misconduct back home.

“There’s a full spectrum of guys here who all deserve my best and my staff’s best. I can’t afford to have preconceived biases like, ‘Hey, a combat veteran is worth more than the nondeployed guy,’ ” Mount said.

His words were echoed in a Thursday email to the Union-Tribune from Capt. Andrew Bolla, spokesman for the Wounded Warrior program’s regimental headquarters in Virginia.

“One of the challenges at the Wounded Warrior Regiment, as with any unit, is trying to balance the requirements of good order and discipline with empathetic leadership for Marines and sailors,” Bolla said. “Similar to the civilian judicial system, proceedings under the Uniform Code of Military Justice allow for character testimony and for a convicted individual to provide an explanation of extenuating circumstances as mitigation during the sentencing phase. An individualized sentence takes into account the relevant circumstances of both the crime and the individual.”

Questions remain about how much commanders in Virginia know about Faulkner’s case.

Camp Pendleton authorities placed him into pretrial confinement on June 24 following the incident with his wife and daughter, which he said was a “cry for help” and which became the foundation of his plea deal.

Faulkner drove to his wife’s home carrying a Glock 34 pistol and a plan to commit suicide later after meeting with his loved ones, but it degenerated into a squabble, he recalled.

“I wanted to see my wife and daughter one last time,” he said.

He hit his daughter. His wife called authorities. He went to the brig.

Faulkner told the Union-Tribune that he hated being in jail but it gave him time for self-examination, as a onetime Marine Corps Engineer School instructor of the year. He had been on the path to first sergeant and, he prayed, retirement at the highest Marine enlisted rank of sergeant major.

“I never asked for help for myself. It was always about what I could do for my Marines,” he said.

Reached by telephone, his wife told the Union-Tribune that the family planned to reunite in Virginia when Faulkner exits the Corps.