The Marine Corps says pilot error was to blame for an MV-22 Osprey’s crash-landing off Camp Schwab late last year.... 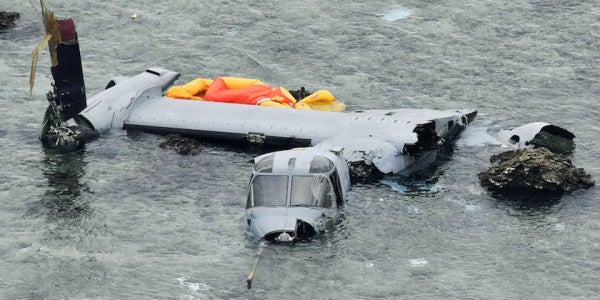 The Marine Corps says pilot error was to blame for an MV-22 Osprey’s crash-landing off Camp Schwab late last year.

One of the helicopter-plane hybrid’s propellers clipped a thick hose on an Air Force C-130 tanker during nighttime refueling on Dec. 13, 2016. The Osprey’s pilot flew 18 miles to shore but decided to put the tilt-rotor aircraft down into the sea rather than fly over a residential area to reach Marine Corps Air Station Futemna, the Marines said at the time. Two crewmembers were injured.

“I want to again thank the Japan Coast Guard, Okinawan Police and the U.S. Air Force 33rd and 31st Rescue Squadrons for their support and assistance during this incident,” Lt. Gen. Lawrence Nicholson, III Marine Expeditionary Force commander, said in a statement Monday. “This was a regrettable incident but one that could have been much worse without the quick reaction of the crew and the support of our Okinawan and Air Force partners. We will continue safe flight operations of the MV-22 and all of our aircraft in support of our Alliance with Japan.”

Nicholson delivered a report on the crash investigation’s findings to Okinawa Vice Gov. Moritake Tomikawa during a meeting Monday at Camp Zukeran in Kitanakagusuku Village.

“It was firmly explained that it was a problem with the pilot’s skill and not a malfunction to the aircraft itself,” Tomikawa told reporters after the meeting. “As a matter of fact, we are not convinced, of course .”

Marine officials could not be reached for comment on the pilot’s status or whether punishment had been handed down.

According to a statement on the report released Monday by Japan’s Ministry of Defense, the Osprey made several attempts to connect to the tanker’s refueling basket but was unsuccessful. The crew then received a fuel warning and was instructed to turnaround and head south toward Futenma.

As the Osprey again approached the fuel tanker, the pilot noticed it was approaching with too much power, the ministry statement said. The pilot decreased the power but could not maintain a normal distance. The refueling basket descended and then ascended, hitting the Osprey’s right propeller. The Osprey immediately ceased refueling efforts and was instructed to move away from the tanker.

On the way back to shore, the Osprey’s pilot was forced to fly in fixed wing mode out of concerns about the aircraft’s thrust, the ministry statement said. The aircraft was vibrating.

The Osprey was ultimately put down into the sea off Camp Schwab because the pilot felt it would be difficult to safely maintain altitude and speed over land, the ministry statement said.

Poor maintenance and equipment malfunction did not contribute to the crash, it added.

“The pilot and crew of the Osprey took at least 12 hours of rest the night before the incident and there was no sign of fatigue or stress that would lead to the incident,” the statement said. “The Osprey’s pilot had valid certification to conduct flight training and air refueling activities. Each crewmember was also eligible for training and were crew chiefs who had valid certification, with absolutely no concern over their capability to accomplish the mission and their expertise.”

The U.S. military took a series of preventative measures after the crash, from adding wake turbulence to flight simulators to education and instruction, the statement added.