Editor’s Note: This article by Oriana Pawlyk originally appeared on Military.com, a leading source of news for the military and veteran community. More than... 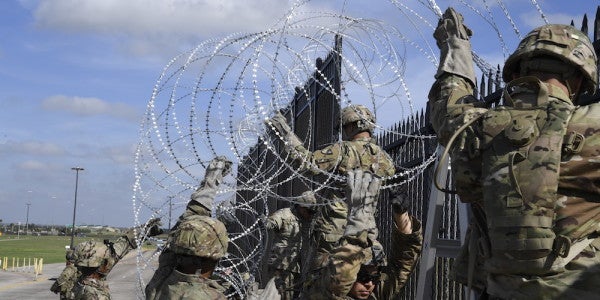 More than 5,000 troops stationed along the U.S.-Mexico border will not receive additional compensation for working in a dangerous environment, known as “danger pay,” a Pentagon official said Tuesday.

Army Col. Robert Manning, a Pentagon spokesman, said troops do not qualify for the special pay unless they are on duty “in foreign areas, designated as such because of wartime conditions, civil war, civil insurrection, or terrorism.”

“Members who are deployed in support of the Department of Homeland Security's border mission are not eligible for imminent-danger pay,” he said in a statement Monday.

Nor will troops receive hostile-fire pay, which is given to service members in close proximity to a firefight or exposed to a barrage of fire from an enemy combatant. The border mission is considered non-combative, Manning said.

“Our military will not receive combat pay or hostile-fire pay as they are not deploying to a combat area, nor are they expected to be subject to hostile fire,” he said, adding that they will be eligible for a separation allowance.

“Members with dependents, including those in support of the border mission, who are deployed away from their dependents (and their permanent duty station) for more than 30 days, are eligible to receive family separation allowance retroactive back to the first day of the separation at the rate of $250 per month,” Manning continued.

President Donald Trump tweeted last week that the caravan of migrants traveling toward the U.S. border could be taken down by lethal force.

“The Caravans are made up of some very tough fighters and people,” he tweeted Oct. 31. “Fought back hard and viciously against Mexico at Northern Border before breaking through. Mexican soldiers hurt, were unable or unwilling to stop Caravan.”

The next day, he said troops should take action if the migrants threw rocks at them.

On Friday, he revisited his remarks, saying he never said U.S. forces would shoot migrants.

“What I don't want is these people throwing rocks. … What they did to the Mexican military is a disgrace,” Trump said. “They hit them with rocks. Some were very seriously injured, and they were throwing rocks in their face. They do that with us, they're going to be arrested, there are going to be problems. I didn't say shoot.”

Air Force Gen. Terrence O'Shaughnessy, head of U.S. Northern Command, last week reaffirmed that “everything that we are doing is in line with and adherence to Posse Comitatus,” a congressional act dating to 1878 prohibiting the military from participating in domestic law-enforcement activities.

Trump has said he could request a deployment of as many as 15,000 troops to the border in support of U.S. Customs and Border Patrol.

Manning on Monday told reporters that troops would not patrol with CPB and are there in a mission-support role only.

“There is no plan for DoD personnel to interact with migrants or protesters,” he said, as reported by Military Times. “We are absolutely in support of [Customs and Border Patrol].”

That number could reach 7,000 in weeks to come, The Associated Press reported.