Financial issues remain the top priority for military members and their families, but high operational tempo, increased time away from... 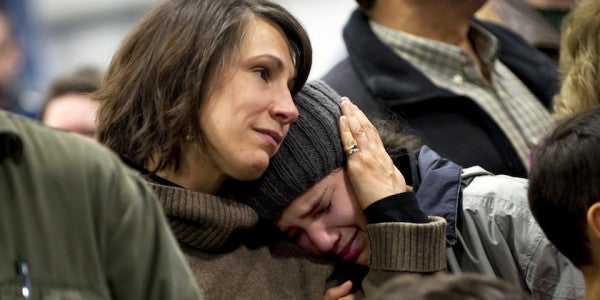 Financial issues remain the top priority for military members and their families, but high operational tempo, increased time away from home and the impact on families have grown into key concerns — highlighting the changing nature of the U.S. military and the fight it faces, according to a survey released Wednesday.

The Blue Star Families annual Military Family Lifestyle Survey involved 8,390 active duty service members, family members and veterans. It found that while military pay, benefits and retirement continue to rank as the top stressors, family stability, time away from home and the impact on children have newly emerged as key issues.

The findings demonstrate far more than a shift of individual concerns, said Kathy Roth-Douquet, CEO and founder of Blue Star Families. The group is named after the custom of military families hanging a service flag in a window with a blue star for each member who was serving.

The findings of the survey reflect an unsustainable demand on service members who are being called to serve in protracted, low level conflicts around the globe and on the modern military families suffering under an outdated military structure that doesn’t account for their needs, she said.

“It’s a very taxing structure on a very small force that’s married and needs two incomes and can’t do it,” Roth-Douquet said.

Related: What Life Is Really Like When A Parent Deploys »

In 1974, when the U.S. military was last redesigned into an all-volunteer force, most service members were single, did not have a high school degree and rarely deployed, she said. Today, most are married, better educated, living off one income when the majority of American families have two. Ongoing conflicts continually take troops away from home.

The takeaway: “We’ve taken the current structure of this military force as far as we can, and it has got to change,” she said.

Among its key findings, the survey said that 72 percent of active duty service members and their families believe the current pace of operations is untenable and “exerts an unacceptable level of stress of a healthy work-life balance,” the report said.

Meanwhile, 42 percent of military family respondents had experienced six months of family separation in the past 18 months. Active duty respondents ranked the impact of deployment on their children among the top five concerns — for the first time since the survey began ranking issues by subgroups in 2014, the report said.

Responders indicated that military families are 27 percent less likely to have dual incomes than nonmilitary couples, even though two thirds of military spouses said they’d like to be working. Many identified family considerations and the demands of the military as reasons they could not join the workforce. Sixty six percent of families said they had difficulty finding child care.

Active duty spouses who cited negative career impact have increased dramatically, and they are far less likely to express satisfaction with military life than spouses who don’t have career concerns — 15 percent vs. 35 percent.

“These statistics are consistent with other studies which have shown a correlation between spouse employment and retention of the service member,” the report said. “In other words, military life is less attractive to spouses and potential spouses when they feel it is necessary to make significant career sacrifices.”

Roth-Douquet said that for many families, not having a dual income means not being able to achieve the American dream. It was important that they be recognized as “American citizens with the same rights and desires as other Americans to have healthy, thriving families,” she said.

Embedded in these findings were also solutions. Helping military families get child care and spouses get work despite frequent moves and high deployment rates would help, Roth-Douquet said.

“For the most part, military spouses are not visible and there are not enough programs to make them work-ready,” she said. “We think one real way forward is for the people planning readiness in the Department of Defense to take on family readiness not as a nice-to-have, but as a need-to-have, to really look at it as a component planning item.”

Another key recommendation: that the military aggressively seek public-private partnerships so families who move are immediately connected with community services that can help them settle in and resolve problems.

“We need the engagement from the local installations … to help reduce the amount of time people are isolated and unconnected,” she said.

Roth-Douquet said the Blue Star Families survey has been used over the years by Congress, the White House, the Secretary of Defense, nonprofits and other organizations.

The survey also found that millennials had joined for different reasons than older service members and veterans. Among respondents over 35, 63 percent said wanting to serve was their main incentive. For those under 35, 56 percent identified education benefits as the biggest lure, followed closely by desire to serve at 54 percent. Other top motivators: defending one’s country, retirement benefits and adventure or travel, the report said.

Other findings from the report:

78 percent have transferred or plan to transfer their Post-9/11 GI Bill education benefits to a spouse or child.

The stigma in seeking mental health treatment persists, with 41 percent of active duty respondents saying they were uncomfortable seeking care and 40 percent fearing it would harm their career.

Service members perceive little support or understanding from civilians regarding the sacrifices they make, the challenges they and their families face, and the difficulties of transitioning out of the military.