The hardest thing I did in the Army wasn’t getting shot at. It was asking for help

"It was asking for help in a culture that makes it a sin instead of a strength." 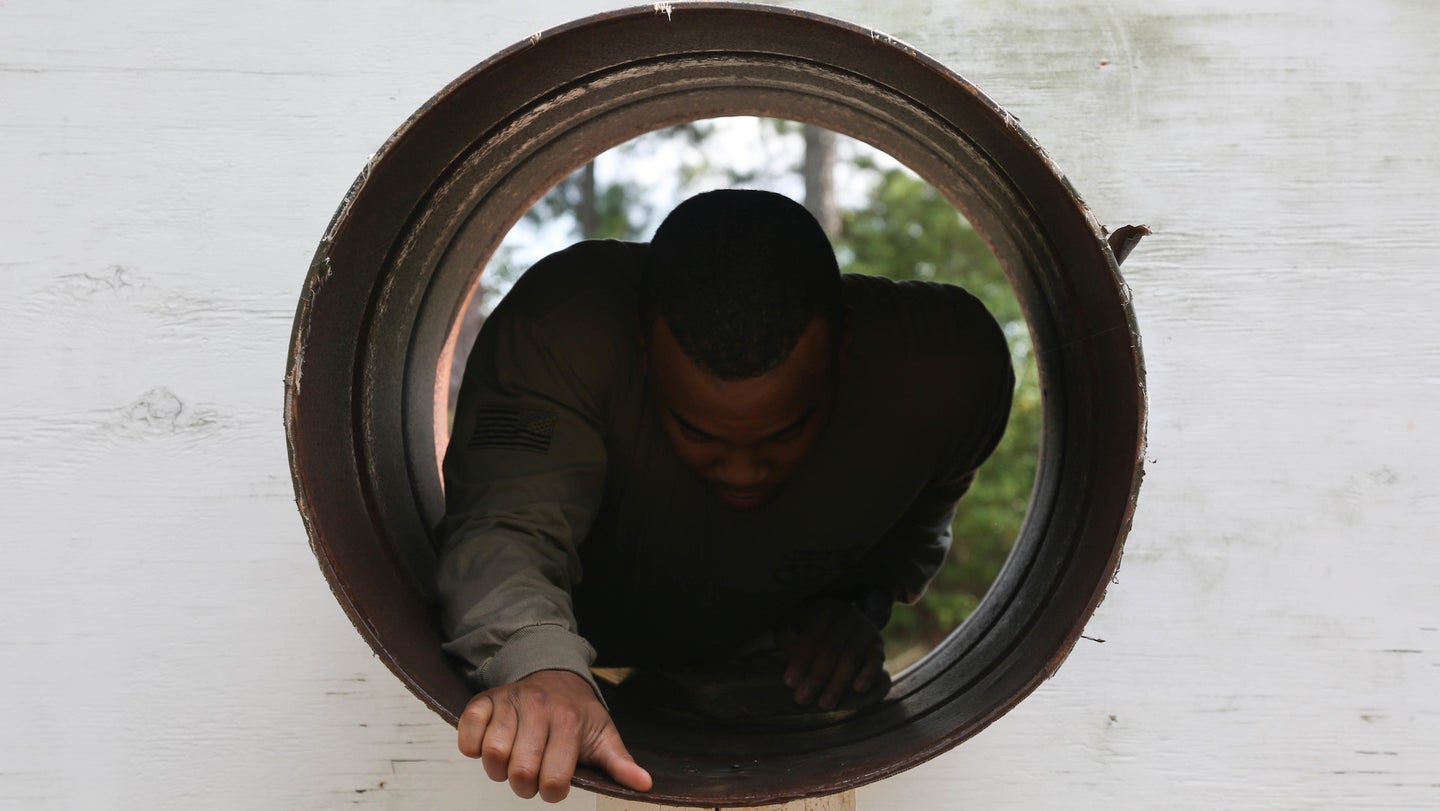 A few nights ago, I did something I rarely do. I met up with a buddy from my soldiering days. We had a good time, drank a few too many beers, and did what soldiers do best. We told stories. We laughed about the stupid things our Joes did in Iraq, how they got in trouble and saved our asses.

We joked about events and people we never could have imagined finding funny then—the incompetence and cruelty of some of our unit leaders, the way incoming alarms shook us from sleep and filled us with fear. It felt good catching up, the war now nothing but memories imprinted on my mind like desert sand. It seemed healthy, two friends looking back. But then he said it. To be fair, I asked.

“Yeah, to be honest, man, some 4th ID guys said some stuff after you left,” he said. “You know, the normal dumb stuff, like, ‘I heard one of your LTs had to go home because he was being a bitch.’”

I didn’t think it would sting, but it did. Even after hours of therapy, personal reflection, and the gifts of time and maturity, the soldier in me—that Redleg, howitzer-shooting artillery officer—couldn’t stand being called a “bitch.” It’s a word all combat arms soldiers fear. You hear it in the field with an 80-pound ruck on your back, on the firing line with a 100-pound howitzer round in your hands, on the PT field as you struggle for that last pushup, and in the barracks when a conversation crosses the line into emotions.

Don’t be a bitch.

The Army has gone to great lengths to erase the stigma of mental health with countless programs, PowerPoint presentations, and trainings. The Department of Veterans Affairs has spent billions on mental health treatment. But when I needed help, I was just another “bitch” who couldn’t handle it, a “pussy” who didn’t have what it takes.

The people who say these things usually have not stared down the rockets and drones that sought our deaths, an irony not lost on me. I’ve found that people who have not seen such things need to proclaim their Spartan virtues. They talk about CABs and their desire to get shot at. I can’t speak for everyone who has had that wish granted, but I would trade it back for anything. Yet the hardest thing I did in the Army wasn’t getting shot at. It was being honest. It was asking for help in a culture that makes it a sin instead of a strength.

Midnight. My 127th day in Iraq. I couldn’t sleep. I hadn’t slept well for a month. All the old tricks had stopped working—no amount of NyQuil, Benadryl, or melatonin could get the thoughts out of my head that kept me from sleep. I was caught in a storm of my own brain chemistry and neurological demons. I saw the rockets coming in, heard them exploding, smelled the smoke in the air, and felt the tightening in my chest. My hands were clammy with sweat. I breathed heavily. The rockets and drones and unit drama all seemed to implode on top of me at once until the only image left was more disturbing than all those that came before it—a rifle in my mouth and the four pounds of pressure on the trigger that would end it all.

Thankfully, I got away from the rifle. For five hours, I walked the perimeter of the FOB with a chaplain. I endured a borderline interrogation from a behavioral health captain. And then finally I said the words that took me out of Iraq forever. I was suicidal.

The tears that streamed down my face when I said those words surely rivaled the Euphrates that flowed five miles to the east. It was the first time I had ever cried in uniform. One of the only times someone saw me cry. The walls came down, and I was terrified. I wasn’t an officer anymore, not even a soldier. I was a patient, an involuntary one.

In the eyes of friends and family, I was brave for asking for help. In the eyes of the Army, I was another successful intervention in a long line of statistics that ended tragically more often than not. But in the eyes of those who actually mattered in my life at the time—the eyes of soldiers—I was a bitch. A pussy. A coward.

The toxic culture and environment of my unit drove me to suicide as much as any rocket or drone. My battery commander was incompetent on his best day and downright cruel on his worst. My battalion leadership was no better, scared of their own shadows and addicted to the near-intoxicating effect of berating their subordinates. In that vacuum of moral leadership, the unit was reminiscent of Lord of the Flies where the strong and the vindictive thrived and the meek did anything but inherit the Earth.

The Army instilled in us ideals and values of servant leadership and selfless service. I experienced anything but those things. We were no Band of Brothers. When I came within four pounds of pressure from ending my own life, the only things that kept me on this Earth were a couple of well-placed friends, a family, and a woman who loved me back home.

So, a year later, when a friend told me about the rumors that swirled after I left Iraq on a C-17, I wasn’t shocked. But I was surprised that it worked. I felt embarrassed again. The shame and guilt I had overcome seeped back. The old thoughts returned. They were right, I thought. I was weak. I let my soldiers and my friends down. I was a bitch.

As we sat there, completely removed from the Army and Iraq, with beers in our hands at a favorite restaurant in Boston, I felt the Army suddenly pulling me back. I remembered what it was like to feel subhuman, to be judged by the emblem on your chest and shoulders, to replace every emotion with the perverted stoicism of fake courage. I remembered that I once lived my life afraid of being called a name, like a teenage boy in a locker room. All the old feelings bubbled back—the anger and resentment that had anchored into my chest for so many years. I felt how one word could undo all the progress I had made since that night in Iraq.

Then I looked to my right and saw the smile of a woman that I love, completely removed from the conversation by loud music and voices. I saw the joy in her eyes as she glanced over at me, felt her hand on my knee as she reminded me of her presence, and heard the beauty in her laugh. I took a moment to consider how happy she was that I was there, that I was alive. I thought about how literally nothing in my world or hers would be better if I had pulled that trigger. I thought about the soldier from 4th ID who killed himself shortly after I left Iraq. I thought about his family and wondered if he had a partner he loved. I wondered if he would still be alive if we took care of each other as much as we say we do.

The Army didn’t save my life. A friend did. He took my rifle from me when he knew what I wanted to say but couldn’t. He sought out the chaplain, and it was his patience and insistence that convinced me to go to the behavioral health officer—it would not be a betrayal to my friends and soldiers or an act of weakness, the chaplain told me.

Even on that plane, I was suicidal. And I had plenty of opportunities to go through with it. But I didn’t. The woman I love saved my life, too. So did my family. The Army—they were nowhere to be found. To them, I was just another bitch, a pussy. I still wonder sometimes: What would they call me if I were dead?

The truth is, I am happy I’m alive. I’m grateful for good friends who intervene in a system of chaos and dysfunction. I feel blessed that the woman I love sticks by my side through it all. I smile during barbecues with family and games of fetch with my dog. I know that life is better than death. I know it’s okay to ask for help. That it takes courage. Most of all, I know that being called a bitch is a small price to pay for living to see a day when I could sit at a bar telling stories.