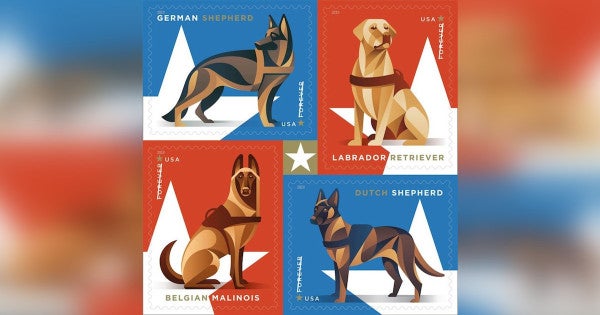 It's a doggy dog world for the United States Postal Service.

The United States federal government's independent postal agency officially released a new set of Forever Stamps in honor of the nation's brave and loyal canines with the Military Working Dogs on Thursday.

“As a military veteran and former law enforcement officer, I have the greatest appreciation for these animals and the service they provide,” said David C. Williams, vice chairman of the U.S. Postal Service Board of Governors, who served as the dedicating official for the ceremony.

“Today, these dogs are born and raised to serve alongside soldiers, sailors, marines, airmen and women, and members of the Coast Guard. They are heroes deserving of our respect and gratitude.”

The stamps are red, white, blue and gold to represent the American flag and patriotism and have a white star on the background.

The Los Angeles-based DKNG Studios created the stamp artwork from hand-sketching the dogs and then using Adobe Illustrator.