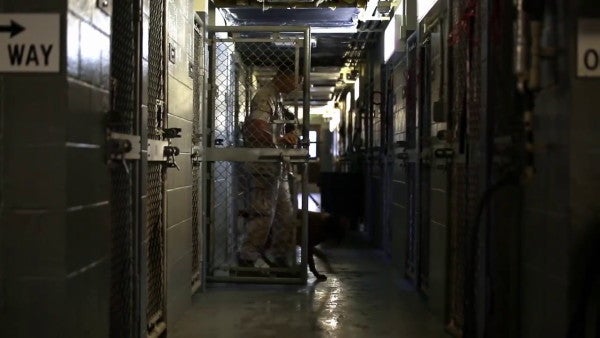 His specialty was route clearance, and he was credited with sniffing out dozens of roadside bombs in more than 100 combat patrols for his Marine buddies.

On April 12, 2012, Yeager and his handler, Lance Cpl. Abraham Tarwoe, were hit by one of those roadside bombs while on patrol in southwestern Helmand province with a unit from the 2nd Battalion, 9th Marine Regiment.

Tarwoe, originally from Liberia, perished in the blast and Yeager was hit with shrapnel and lost part of an ear.

Yeager was one of four working dogs who received American Humane's K-9 Medal of Courage in a ceremony Tuesday at the Rayburn House Office Building.

After the 2012 IED blast, Yeager received the Purple Heart from the Marines and was retired to Camp Lejeune, North Carolina, where the now 13-year-old black Lab was adopted by a Marine family.

Caroline Zuendel, of Cary, North Carolina, Yeager's new best friend, called him “just a sweet dog” who dotes on her three kids. “He's like my fourth,” she said.

Yeager hasn't lost his devotion to service. He's now a roving goodwill ambassador for the Project K-9 Foundation that seeks to improve the quality of life for retired military and police working dogs.

Unlike the Marines, who give their working dogs a rank above that of their handlers, Troll went through his working career without a rank.

“But you can call him general,” Wilson said.

Wilson, who was assigned to Troll while serving in Europe in 2011, said he wasn't quite sure how Troll got his name but speculated that it was because “he's always in control. He found a lot of IEDs out there and some high-value .”

In 2012, they deployed to Afghanistan, where they went on 89 combat missions in support of Army and Special Operations units, according to the biographies of the four working dogs from American Humane, the animal welfare organization founded in 1877.

On a four-day mission against an enemy compound, Troll sniffed out three IEDs enroute to the target and then went on a sweep of the area, finding a well-concealed tunnel where two enemy combatants known to have conducted attacks against the coalition were hiding.

The patrol came under fire as they exited the area and an Afghan National Army soldier was wounded.

“Troll and I kinda pulled back for cover,” Wilson said, and he began returning fire.

Troll and Wilson were then told to clear a landing area for a medevac helicopter as Wilson and others from the patrol continued to return fire. Once Troll had checked out an area that was safe to land, the helicopter safely evacuated the wounded soldier.

American Humane President Robin Ganzert said that 20 working dogs have been honored with the K-9 Medal of Courage over the past four years.

“These dogs do amazing work and give unconditional love,” she said.

The awards were named for philanthropist Lois Pope, who said “there are heroes on both ends of the leash.”

“Niko,” a 10-year-old Dutch Shepherd, spent four years in Afghanistan working for the Defense and State Departments, the CIA, the U.S. Agency for International Development and NATO partner nations, participating in countless patrols and house-to-house sweeps, and protecting personnel at high-level meetings.

American Humane said Niko has now been adopted by a family in Alaska.

Military working dog “Emmie,” a 12-year-old black Lab, was on three tours in Afghanistan from 2009-2012, and worked mainly off-leash, assisting with route clearance. She had three different handlers in Afghanistan, and the last one described her as a “high-drive dog, stubborn at times, who never stopped working,” American Humane said.

After her last tour in Afghanistan, Emmie came to work at the Pentagon, where she easily adapted to working on leash in searching cars, buildings and parking lots, American Humane said.

— Richard Sisk can be reached at Richard.Sisk@Military.com.