The Navy has rolled out a program aimed at providing added support for sailors considered at risk for suicide. Sailor... 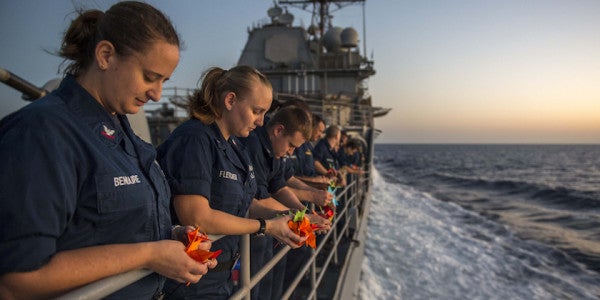 The Navy has rolled out a program aimed at providing added support for sailors considered at risk for suicide.

Sailor Assistance and Intercept for Life, or SAIL, was announced service-wide earlier this month and is now available at all Fleet and Family Support Center locations.

The voluntary program works by linking sailors who have demonstrated suicidal behavior with Fleet and Family Support Center counselors trained in assessing suicide risk. Those counselors remain in contact with the participant for three months, said Capt. Michael Fisher, director of the Navy Suicide Prevention Branch. They can help identify stressors, like financial issues, and link the sailor with resources, he said.

Participation in SAIL is not intended to replace therapy. “A caring contact is all it is,” Fisher said.

SAIL is patterned after the Marine Corps’ Marine Intercept Program, which began in 2014. A pilot of the Navy’s version began in August in the Pacific Northwest. At least 91 sailors accepted SAIL’s services out of 175 referrals between Aug. 28 and Feb. 3, according to Navy data.

About 40 percent of sailors who commit suicide had a previous attempt or impulse, Fisher said. Removing stigmas that prevent sailors from seeking mental-health treatment or from helping those who appear to be in danger has been a challenge. The Navy has promoted intervention programs to help sailors recognize and respond to suicidal or risky behavior among their peers.

“We want people to be willing to step forward if they’re having challenges,” Fisher said.

The Military Crisis Line offers confidential support for active-duty and reserve service members and their families 24 hours a day at 800-273-8255 or online at www.militarycrisisline.net. Text messages can also be sent to 838255.