The Navy Is Seeking A Few Thousand Good Men 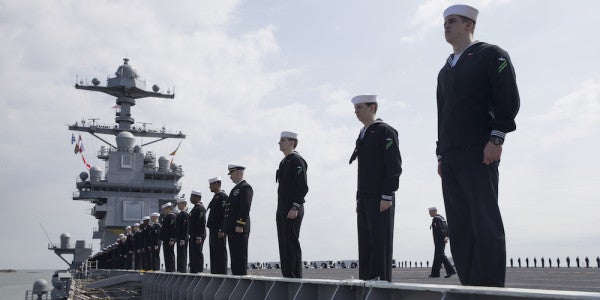 U.S. Navy officials confirmed this week that the service will need “on the order” of 350 ships to accomplish its global mission in the coming decade.

And with that ramp-up in shipbuilding must come a significant surge in force strength, the chief of naval personnel told members of Congress on Wednesday.

Speaking to members of the House Armed Services subcommittee on military personnel, Vice Adm. Robert Burke said the service will require between 20,000 and 40,000 additional sailors to man a fleet of that size, depending on how fast the ships are built.

Currently, the Navy has 275 active ships and 335,000 active-component sailors. The proposed ramp-up represents roughly a 28 percent increase in the size of the fleet and an increase of up to 12 percent in force end strength.

“The infrastructure that we have in place in terms of our recruit training command is sufficient, given shipbuilding timelines, to put enough sailors through there,” Burke said. “We would have to ramp up additional drill, recruit division commanders, and perhaps additional training capacity, but probably not additional infrastructure is where we are with that right now.”

In addition to shipbuilding speed, one factor that will affect the size of the required Navy ramp-up is how many of the new ships are manned, Burke said.

“We think that that force also needs to be a mix of manned and unmanned vessels,” he said. “So that could also reduce the manpower increase. But we're very much looking at that.”

In an assessment of the future Navy released on Wednesday, Chief of Naval Operations Adm. John Richardson said the future fleet will include unmanned surface ships and underwater platforms.

While the Navy would work to prolong the service lives of ships already in the fleet and get more value out of existing platforms by adding new technology, Richardson said, the plan would ultimately require the service to build more, and fast.

“There is kind of a demand for presence at different parts around the world,” he said. “And this has been an important part of that body of studies. You really need to be there to provide credible options. You can't be virtually present and provide that credible option.”

While some analyses have suggested that the Navy needs three decades to reach its target size, Richardson said he wants to build to this bigger, more powerful fleet by the mid-2020s in recognition of global threats and rising adversaries.

Still to be determined is how the Navy plans to pay for ship construction, as well as the additional sailors. Richardson said the service believes the buildup will cost “far less” than the $102 billion per year assessed by the Congressional Budget Office last month, but did not provide any cost estimates Wednesday.

And while Navy officials have not cited a need to create additional infrastructure to support fleet growth, the service's civilian workforce will also be growing.

Acting Navy Secretary Sean Stackley, then the Navy's acquisition chief, said in January that the service is already prepared to ramp up to meet increased ship production demands.