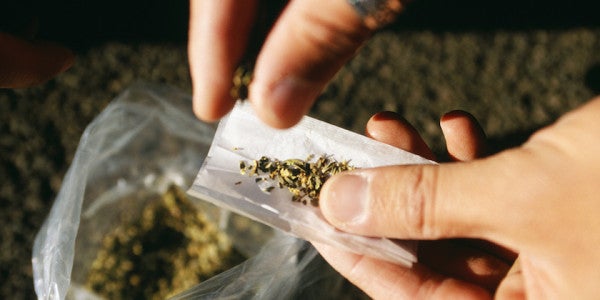 Patients and their advocates had lobbied for the bill for more than a year, citing statistics that show military veterans with PTSD have a high rate of suicide.

“I'm ecstatic, I'm happily surprised, I'm going to go get my card,” said Don Karpowich, 57, an Air Force special operations veteran from Morristown with PTSD who has attended several demonstrations at the Statehouse over the past year to push for the bill.

Christie had said at several town halls that he did not want to expand the medical marijuana program. Two years ago he turned down a petition submitted by Coalition Medical Marijuana New Jersey to add PTSD to the list of a dozen ailments that qualify for cannabis use.

But a month and a half after the bipartisan bill was placed on his desk, Christie signed it with a statement explaining his reasons.

Christie cited statistics of the federal Department of Veterans Affairs estimating that 20 percent of veterans who fought in Iraq and Afghanistan over the past decade suffer from PTSD.

“Throughout the country, significant resources are being used to research PTSD and increase access to traditional treatments, such as psychotherapy and antidepressant medications. This bill would provide struggling veterans and others with the ability to use medical marijuana to treat PTSD, but only after it has been determined by a physician or psychiatrist that conventional medical therapy is ineffective,” he wrote.

Christie said that “requiring conventional medical therapy to be ineffective in treating PTSD before medical marijuana can be prescribed is an appropriate threshold safeguard to deter misuse.”

He said he will also direct the health commissioner to create new regulations to further prevent misuse, an issue he has raised in the past to explain why he does not favor expanding the program.

Many patients and advocates, however, have criticized the health department for promulgating too many rules, saying that makes the program unwieldy and prevents people with serious illnesses from qualifying to use cannabis.

Some saw Christie's action as being motivated by his role as a key adviser in the presidential campaign of Donald Trump.

“I wonder if Trump had something to do with this,” Karpowich said.

Christie approved the bill only a few days before it would have become law automatically, without his signature, if he did not veto it.

He said that “the mere potential for abuse by some should not deter the state from taking action that may ease the daily struggles of our veterans and others who legitimately suffer from PTSD.”

Assemblyman Vince Mazzeo (D., Atlantic) a primary sponsor of the bill, said that “post-9/11 veterans are the group most affected by PTSD” and that there are about 428,000 veterans in New Jersey.

“The VA has stated that it wants each veteran to find the medication with the least amount of side effects that allows them the optimum level of independence. For many, medical marijuana is the drug that best fits that criteria and the only one to provide veterans with significant relief from the anxiety associated with PTSD,” Mazzeo said.

PTSD is a mental health condition triggered by a traumatic event such as a physical or sexual assault, childhood neglect or physical abuse, a natural disaster, exposure to combat, or other extreme or life-threatening events, according to the bill.

“We know that individuals with PTSD are using marijuana that they are getting from the streets and, unfortunately, they are at risk of purchasing a substance that may be laced with a dangerous additive and of getting a criminal charge,” said Sen. Nicholas Scutari (D., Union), another primary sponsor. “This will give them the ability to obtain marijuana legally that is regulated by the government.”