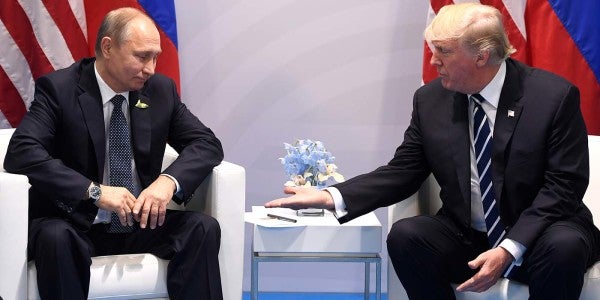 The Wall Street Journal and CNN reported on Friday that Mueller had obtained a search warrant for records of the “inauthentic” accounts Facebook shut down earlier this month and the targeted ads these accounts purchased during the 2016 election.

Legal experts said the warrant meant Mueller had been able to convince a federal judge that there was good reason to believe a foreign entity had committed a crime by making campaign contributions in the form of ads and the spread of fake news, and that evidence of that crime would be found on Facebook.

Three days later, the New York Times reported that Mueller told Trump's former campaign chairman Paul Manafort he was going to be formally charged with a crime following a raid on his Virginia home over the summer.

In this photo taken July 21, 2016, then-Trump Campaign manager Paul Manafort stands between the then-Republican presidential candidate Donald Trump and his daughter Ivanka Trump during a walk through at the Republican National Convention in Cleveland. Manafort, secretly worked for a Russian billionaire to advance the interests of Russian President Vladimir Putin a decade ago and proposed an ambitious political strategy to undermine anti-Russian opposition across former Soviet republics, The Associated Press has learned.AP Photo/Evan Vucci

“Combined with a flurry of stories about subpoenas, grand-jury appearances and other activity, it’s reasonable to expect that Mueller is moving forward on a number of different fronts and is getting close to entering a litigation phase,” wrote Wittes and Hennessey, a former attorney for the National Security Agency.

“The key question is what he will allege, to what extent it will deal with campaign activity, and against whom he will allege it,” they added.

CNN reported on Monday that the FBI obtained a warrant from the Foreign Intelligence Surveillance Court last year to surveil Manafort, which typically requires “some indication of criminal conduct,” Wittes and Hennessey said, rather than merely “a showing of probable cause that a crime has or will be committed.”

In this July 17, 2016, file photo, Paul Manafort talks to reporters on the floor of the Republican National Convention at Quicken Loans Arena in Cleveland.AP Photo/Matt Rourke

Manafort was previously surveilled under a separate FISA authorization that began in 2014 as the FBI scrutinized his lobbying work on behalf of the pro-Russia Party of Regions in Ukraine and his business dealings with Russian entities.

That surveillance ended due to a lack of evidence, according to CNN, but was later restarted under the new warrant that extended into 2017. Information obtained from the newly discovered FISA warrant was shared with Mueller's team.

It is still unclear whether Manafort has already been indicted, and if so, on what charges. New York Attorney General Eric Schneiderman was recently recruited by Mueller to help investigate Manafort for possible financial crimes and money laundering. The IRS's criminal-investigations unit has been brought onto the investigation to examine similar issues.

Manafort's spokesman did not respond to a request for comment.

It is difficult to predict whether Mueller will charge specific foreign entities with a crime for what could be perceived as illicit campaign contributions — there is little if any precedent for an election interference as brazen and multifaceted as Russia's.

Taken together, though, wrote Wittes and Hennessey, the developments signal that “Mueller’s investigation has reached a critical stage — the point at which he may soon start making allegations in public.”