What started as a normal visit to a coffee shop Thursday morning turned into the honor of a lifetime as... 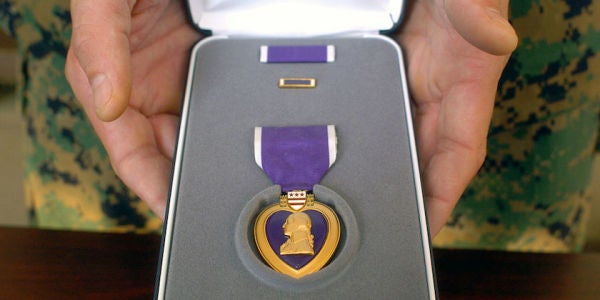 What started as a normal visit to a coffee shop Thursday morning turned into the honor of a lifetime as a 91-year-old Marine Corps veteran was awarded a Purple Heart — 72 years after being wounded.

Samuel “Lee” Anderson was a 19-year-old corporal when he fought in the Battle of Iwo Jima. After 21 days of intense fighting, a landmine blast set off by a nearby soldier knocked him unconscious.

While he can't recall how long he was out, Anderson said he remembers being happy to finally take a shower when he got to the hospital.

“All of a sudden, I was on a stretcher,” he said. “I ended up in Guam at an Army hospital — hadn't had my shoes or anything off in 21 days, so I smelled.”

Eventually, he settled down, started a family and worked as a plumber.

One day, he and his brothers decided to take a look at their father's service record.

“What we found out clearly on his , right out the gate, was that he was wounded,” Todd Anderson said. “Down below it, in remarks, it said 'no record of award of Purple Heart.'”

That was two years ago.

Related: 12 Service Members Who Could Be Awarded Medals Of Honor »

He eventually got in touch with Marine Lt. Col. Aaron Doty and set the ball rolling to honor his father, who lives in Woodland Hills.

Weeks later, on Feb. 9, Lee Anderson walked into Henri's restaurant in Canoga Park to have breakfast with his friends — something he does as part of his daily routine. What wasn't part of the routine was the procession of family and friends who streamed into the dining room at the end of his meal.

They were all there to see him finally receive a Purple Heart.

The group included his sons and his wife as well as several Marines in their dress blues and officers from the Glendale Police Department.

The officers were there to show their support for both Andersons. Their ties to the local police agency continue as Todd Anderson's son is an officer with the department, and his daughter works as an emergency dispatcher.

Doty was on hand for the medal pinning and said it was something that should've been done a long time ago.

“It's my great honor to finally put this together and hang this medal on this man's chest who earned it back in 1945,” he said. “As a brother, as another Marine, this is an absolute honor and this is what Marines do — love our own ferociously to the death. We take care of each other.”

Lee Anderson said he was grateful for everyone who showed up for the ceremony and that it was overwhelming. He was also surprised because he expected the medal would arrive in the mail.

“I never thought they'd ever have a big ceremony like this,” he said. “It's a great thing that my boys did for me, and I love them for it. “