There are roughly 220 miles of water between the Pentagon and Naval Station Norfolk and that number reminds Bobby Powell... 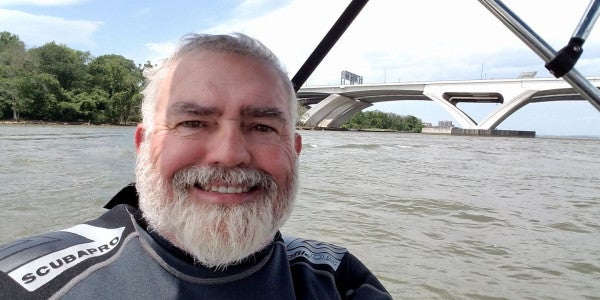 There are roughly 220 miles of water between the Pentagon and Naval Station Norfolk and that number reminds Bobby Powell of a statistic he heard that haunts him.

“The information came out several years ago that on average, 22 vets a day kill themselves,” Powell said, speaking by phone from his office in Alexandria. “One a year is too many, but 22 a day—that number is phenomenal. I’m no doctor myself, but it just seems to reason that more things can be done .”

What Powell can do is swim. So he decided to embark on a 220-mile swim to raise awareness of the issue. On June 3, he’ll climb into the Potomac River at the Pentagon Lagoon basin and, if all goes well, he’ll end up at Naval Air Station Norfolk 15 days later.

The Fitch Foundation, a nonprofit dedicated to helping veterans integrate into civilian life, is supporting his effort.

Powell, 52, retired in 2004 from a 21-year-career as an airborne sensor operator in the Navy. As part of a helicopter aircrew, he was also a rescue swimmer. Having the opportunity to save lives—the opposite of what is often the military’s job in a combat situation—is what he’s most proud of about his military career.

“To keep someone alive, whether in the middle of the ocean or in combat situation, that’s an extra challenge,” he said. “Just being able to say that was my path is kind of the highlight of my career.”

The instinct to save lives—which was planted when he worked as a lifeguard in high school and grew throughout his military career—is still strong with him. But he felt powerless to help the veterans and active-duty service members who are driven to take their lives.

“It’s a situation where being somebody that’s done search and rescue, been a lifeguard and conducted combat rescue, I have it ingrained in me to save somebody’s life. But those are a younger person’s jobs,” he said. “As I’m getting older here, I’m looking at the idea that maybe I can do something to help at least reduce the risk of suicides. And I thought one of best ways is to do something draw some attention to it.”

Powell said the water still calls to him, even after seven months-long deployments on Navy aircraft carriers. He got the idea for a long swim to raise awareness of suicide two years ago after reading about Chris Ring, the former Navy SEAL who swam the length of the Mississippi River to honor Gold Star families—families who have lost a member to military service.

And while his own transition out of the military was not difficult, he has friends who’ve struggled. One, another former SEAL, was severely wounded in Somalia and suffered from depression that nearly drove him to suicide. And four members of his motorcycle group have committed suicide.

“Three were older than me and one was younger,” Powell said. “And it’s not just veterans. Here in Prince William County, four of our police officers killed themselves. It’s not one group of people.”

Suicide still carries a stigma. It’s not often reported on or noted as a cause of death in obituaries.

Powell also wants his swim to be an example to disabled veterans who might feel they can no longer lead active lives. He has diabetes and neuropathy—nerve damage—that affects his arms and legs. He also has a titanium rod holding together the humerus bone in his upper arm, the result of a motorcycle accident.

Powell is breaking his swim into 15 legs. He said he can swim about two miles an hour, depending on the current and tide.

The shortest leg of his swim is six miles from Aquia Landing to Fairview Beach yacht club, which he expects will take him about three hours. The longest is 17.7 miles, from Bethel Beach to Yorktown.

Last year, he swam from Tim’s Rivershore Restaurant in Dumfries to Tim’s 2 at Fairview Beach, a 17.2-mile distance which he completed in 10 hours and 15 minutes.

Powell said he is training for the swim by logging 3.5 miles a day in the pool at Onelife Fitness in Woodbridge. He’ll take his training into the Potomac as soon as the temperature in the river warms up a few degrees.

“In some ways, it’s easier to swim in the river,” he said. “In the pool, you have to do flip turns every 25 yards which wears you out after a while, especially when you have to do so many laps to get three miles.”

He’ll be accompanied each leg of his journey by volunteers on power boats, paddle boards or kayaks who will carry his spare swim gear, mask and snorkel and food and drink.

“My food plan is to stop basically every hour and eat something—apples, bananas, other berries, a protein bar every so often,” he said. “And drink a lot of water. People don’t think you get dehydrated swimming but you definitely do.”

“One person is going to pay for a hotel for me en route, but even if I don’t get any more of that kind of support, I’m still going to do it,” he said. “I decided I was going to do it even if I got zero support, period—but there’s a lot of people volunteering.”

Powell posts daily updates on his training progress on his public Facebook page (search for Bobby Boog Powell). Donations to support his swim can be made at gofundme.com/yethwjuc.