More than five months after being measured at the Hampton Veterans Affairs Medical Center, Arthur DeAngelis is still waiting for... 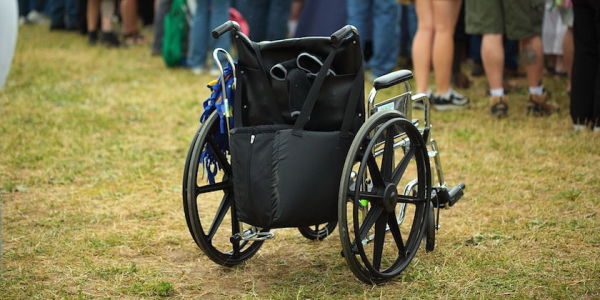 More than five months after being measured at the Hampton Veterans Affairs Medical Center, Arthur DeAngelis is still waiting for his wheelchair.

But it's not so much the wait that DeAngelis has endured that has upset him and his wife, Elaine.

“I think our biggest beef with the VA is the lack of communication,” Elaine DeAngelis said.

Arthur DeAngelis, 80, served in the Air Force for nearly four years and received an honorable discharge in March 1961. He's lived at Our Lady of Perpetual Help, an assisted-living center, since December following a July 2015 fall that broke his back, the DeAngelises said.

Arthur DeAngelis was fitted April 22 for a custom manual chair, documents provided by the couple show. VA progress notes dated the same day include a goal of receiving the chair in six to eight weeks.

As those weeks turned into months, the couple said they called the VA four to six times to ask about the chair. Their calls were not returned, they said. Elaine DeAngelis said she dropped by the center's occupational therapy department this summer to ask in person. Therapists work with the prosthetics department to fill prescriptions for wheelchairs and other devices.

“They just said, 'We will call you,” Elaine DeAngelis said.

Arthur DeAngelis currently uses a chair provided by Our Lady of Perpetual Help. A custom-fitted chair would provide more support, and he could bring that one home, the couple said.

After The Virginian-Pilot inquired about the delay in late September, Elaine DeAngelis said VA officials called to say they could expect the chair by sometime this week. She said she received another call from the prosthetics clinic that indicated the chair had been delivered in July. What was actually delivered was a foam insert for the chair, she said.

Veterans Affairs officials declined to talk specifically about the DeAngelises' case, citing privacy concerns, but called theirs an isolated incident.

Wait times can vary for items depending on patients' needs, and some wheelchairs may be provided the same day, said Dr. Therese Drew, Hampton VA's chief of rehabilitation and medicine.

Robert Clayborn, chief of prosthetics at the Hampton VA, said a typical wait for a custom-fitted wheelchair is six to 12 weeks.

Clayborn said the prosthetics department tracks orders made through vendors.

“Had it been brought to my attention earlier, we would have acted on it,” he said. “Again, this is not typical of the way we do business here.”

Elaine DeAngelis said her calls went to occupational therapy. Clayborn said there was no evidence that anyone from the prosthetics clinic spoke with the couple.

VA did not respond to additional questions.