Friday I was boarding a plane from New York City to Dublin when I read on Facebook that Paris was... 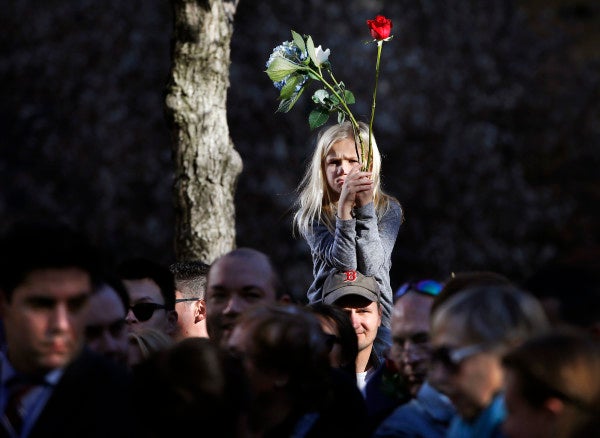 Friday I was boarding a plane from New York City to Dublin when I read on Facebook that Paris was under siege by terrorists. I looked around as I watched New Yorkers huddle around the televisions all over the airport with their eyes glued to the news. Unfortunately, New York is all too familiar with terror. As the room started to spin, my stomach started to turn, and I began to rethink my trip to Europe as more and more threats poured in.

There are only a few times in my life I have felt real, bone chilling fear. The first time was when I was in high school and I watched the Twin Towers burn, and I experienced the horror of an act of war on our own soil, not really understanding exactly what it was. The second time was when I got the knock at the door on Sept. 9, 2011, and was told that my husband Chris was shot to death by the Haqqani network in Afghanistan only three months into his first deployment. I didn't understand how someone who was so good at what he did and seemed invincible could be killed by the same enemy that is trying to instill fear in the hearts of people around the globe.

As I sat in my seat on the Boeing 747, my fear turned to anger. I scrolled through status after status and watched so many of my friends feel helpless and succumb to fear, and my anger grew. I refuse to live in fear or let evil cowards take away my joy or freedom, and I refuse to watch them take away the joy and life from those closest to me. Too many have fought, bled, and died for our freedom and our way of life and peace of mind.

The whole point of terrorism is to scare people into living lives of fear. By scaring us, they can control our lives by instilling fear in our hearts, and steal our joy to live or hunger for life, and when they succeed in changing our lives, they win.

We as a free people must refuse to let terrorism or terrorists scare us or dictate our mindsets. We must not lose faith in humanity, but be encouraged that the brave will rise up in response to evil and refuse to let it prevail. Good always prevails and God is greater than evil. Novelist Salman Rushdie said it best, “How to defeat terrorism? Don't be terrorized. Don't let fear rule your life. Even if you are scared.”

I am not asking you to be oblivious or live callously; this is a wake-up call to do the opposite. Take your children to the park, go for that run, and go shopping at the mall. Our military's sacrifices are what have paid for that freedom, and the freedom to live without fear. Living in fear is a choice, and one that they want you to make in their favor. They want to control you with the only weapon they have mastered — a weapon that doesn’t even really exist. We are the land of the free because of the brave. Because of our brave men and women who fight the fight so we don’t have to, and so we can live in peace. We have fought too hard, supported and sacrificed too much, and endured too many deployments to let a terrorist group steal our joy or inhibit our way of life.

Those who know all too well that there is evil in the world — members of the military — are the ones who support those who go and fight it head on. As many Americans can hide from the threat of evil and pretend that it doesn’t exist, American military families know all too well that is not the case. We are the ones who have been supporting our nation’s finest and most courageous on multiple deployments for years and years on end as they fight against this very enemy.

We are not naive to the fact that there are threats, and we are not new to the notion that we should always be aware of our surroundings. Throughout the past few months I have noticed many military families overwhelmed with fear and more scared than I have ever seen — even after 14 years of war, or perhaps because of it. The threats are not new, and the evil no more real than what we have faced before.

Continue to be smart, continue to be wise, and continue to live free in the greatest country in the world — free of fear and built on freedom. Too many have sacrificed too much fighting this evil force for us to allow one ounce of fear or worry to enter our minds. This is a mental battle as much as physical. Do not let them win, and do not let them change us. Trust yourself and your judgment and find peace in knowing that you are resilient and strong.

What ISIS doesn't know is that the real center of America is in the hearts of our people, our resolve, and our freedom from fear.

Don't let them attack us in our hearts. Be brave, be strong, and do not be afraid to live your life.