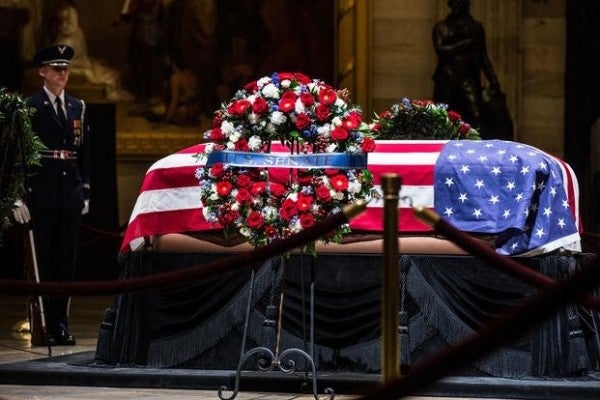 A bill that would have the last Medal of Honor recipient from World War II lie in state in the Capitol Rotunda gained bipartisan backing Monday from the chairmen and ranking members of the Senate and House Veterans Affairs Committees.

“I can't think of anybody who would vote against that,” Sen. Johnny Isakson, R-Georgia, chairman of the Senate Veterans Affairs Committee, said of the bill introduced in January by Rep. Carol Miller, R-West Virginia, which would direct a state funeral for a member of the “Greatest Generation” who earned the nation's highest award for valor.

State funerals, and lying in state at the Capitol Rotunda, are reserved for current and former U.S. presidents and those deemed to have rendered “distinguished service.” The late Sen. John McCain was granted the honor last August.

Army Gens. John J. Pershing and Douglas A. MacArthur had state funerals, but there has never been one for an identified enlisted service member. (There have been state funerals for the “Unknown Soldiers” of World War I and World War II.)

Roe said he “absolutely” would back the bill, while Tester said “it would be fitting and proper” to honor the last Medal of Honor recipient of World War II in the nation's capital.

Takano also said he would back the bill and noted that three of his great-uncles served in the legendary “Go For Broke” 442nd Infantry Regiment of Japanese-Americans during World War II.

In introducing the bill in January, Miller said that honoring the last WWII Medal of Honor recipient would show the nation's gratitude to all “our veterans from the Greatest Generation.”

“In this time of political divide, respecting our veterans and honoring our nation's heroes is something all of my colleagues can come together to support,” she said.

A total of 464 Medals of Honor were awarded during World War II, 266 of them posthumously, according to government figures. Only Williams, Coolidge, Currey and Maxwell are still living.

Williams, 95, was awarded the medal for his actions with a flamethrower and demolition charges in taking out enemy pillboxes during the battle of Iwo Jima.

Coolidge, 97, was honored for leading a small unit in France in holding off overwhelming German attacks for four days.

Currey, 93, was credited with taking out four enemy tanks in France with a “bazooka” and anti-tank grenades while rescuing five other U.S. soldiers guarding a bridge.

The oldest of the four, Maxwell, 98, was awarded the medal for falling on a grenade in France to protect other soldiers.

“The Greatest Generation represents the very best of West Virginia and America,” the letter said. “For this reason, we can think of no greater tribute than to honor the last of our national heroes of this generation with a state funeral.”

Last August at the American Legion's National Convention, a resolution was passed in support of a petition to honor the last MoH recipient from the war with a state funeral “to join together the hearts of millions of Americans in a unifying event honoring the legacy of all World War II veterans.”

The petition was begun by Bill McNutt, chairman and co-founder of State Funeral for World War II Veterans. He told Stars & Stripes last year, “The country is so desperate for something that is unifying, not political, yet patriotic. This is all of those things.”