82nd Airborne Paratroopers Are Getting A Major Boost In Firepower 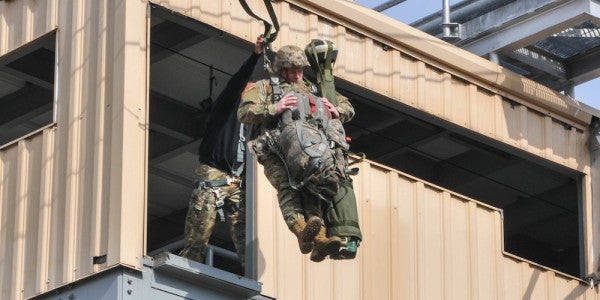 The 82nd Airborne Division is adding more firepower to its paratroopers.

Soldiers with the 1st Brigade Combat Team trained last week to jump into combat with the FIM-92 Stinger, a man-portable surface-to-air missile that could be used against enemy helicopters or unmanned aerial vehicles and to protect drop zones.

The missile systems are meant to give another layer of protection to soldiers who train to jump behind enemy lines and seize airfields and terrain before other troops and supplies can arrive.

In recent years, the 82nd Airborne Division has taken several steps to up its firepower, working to increase the speed at which the division’s own aerial systems — attack helicopters and unmanned aerial vehicles — can be deployed and adding ultralight all-terrain vehicles and armored vehicles to its arsenals.

Officials said fielding the weapon to infantrymen in brigade combat teams was meant to close a capability gap against near-peer adversaries.

Soldiers from the 108th Air Defense Artillery Brigade are training the paratroopers on how to use the air defense systems. And riggers and jumpmasters are working with soldiers to ensure they can safely exit an airplane with the unwieldy weapons, which can be nearly as tall as some soldiers once packed for an airborne operation.

On Tuesday, soldiers from the 1st Brigade jumped from two C-130s with the missile jump packs for the first time.

Spc. William Carver and Spc. Nelson Rumsey, with the 1st Battalion, 504th Parachute Infantry Regiment, said the jump came after a series of other training events, including mock door exercises and jumps from a 34-foot tower.

Because of the weapon's size, that training is necessary to prepare soldiers for any real-world jump, they said.

“It’s a little bit taller, a little bit heavier” than most weapons used by the division, the soldiers said. That can lead to a rougher exit and more spinning in the air, if paratroopers aren’t prepared.

The weapons also must be rigged mid-air, soldiers said, due to their large size.

Paratroopers from the 1st Brigade were to have made repeated jumps with the Stinger missile jump packs over the course of the week.

They will work closely with the 108th ADA in the coming weeks while training on how to employ the weapons after a jump. The training will include classroom instruction and virtual reality training.