Editor’s Note: This article by Oriana Pawlyk originally appeared on Military.com, the premier source of information for the military and veteran community. The... 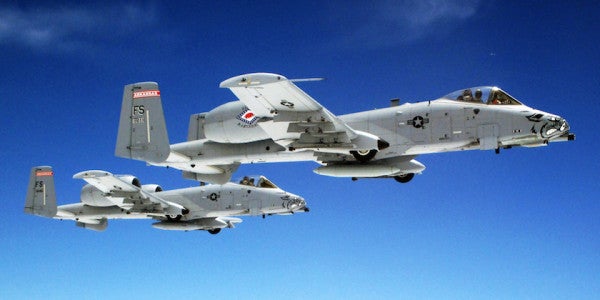 The U.S. Air Force has published its solicitation to defense companies to re-wing more than 100 A-10 Thunderbolt II close-air support mission aircraft.

The proposal, released May 25, calls for 112 wing sets and 15 additional kits over a five-year ordering period as part of the service's A-10 Thunderbolt Advanced-Wing Continuation Kit or “ATTACK.”

The Air Force is asking defense companies to respond by Aug. 23, the solicitation said. Estimated total costs have not been determined.

The contract award is expected in fiscal 2019, the documents said.

Gen. Ellen Pawlikowski, commander of Air Force Materiel Command, recently told reporters she knew of at least two companies interested in the endeavor prior to the draft RFP release. The service in February released a draft RFP to help defense companies submit ideas on how best to develop new wings for the remaining portion of the A-10 fleet.

“I understand there is some potential for some increase in coming editions , so I think there's an interest there,” she said during a breakfast in Washington, D.C., on May 15.

“I think the jury will be out though in terms of the price I can get,” Pawlikowski added. “That will be a function of what folks think will be our long-term buy of those as we go forward.”

The Air Force in January said it was searching for a new company to rebuild wings on the A-10 after ending an arrangement with Boeing Co.

Of the 281 A-10s currently in the inventory, 173 have already been outfitted or are in the process of being outfitted with new wings (though one of the newly re-winged planes was destroyed in a crash), according to Air Force spokeswoman Ann Stefanek.

That leaves 108 aircraft remaining in the inventory still slated to receive the upgrades, she told Military.com at the time.

Air Force officials have said the service can commit to maintaining wings for six of its nine A-10 combat squadrons through roughly 2030.

Just how many it will actually restructure is unknown.

During a House Armed Services Tactical Air and Land subcommittee hearing last month, Lt. Gen. Jerry D. Harris, the service's deputy chief of staff for strategic plans and requirements, said as a platform, the A-10, beloved among ground troops and attack pilots alike, will remain until about 2030. But the number of A-10s that will keep flying as a result of new wings will likely be reduced.

“We are not confident we are flying all of the airplanes we currently possess through 2025,” Harris said in response to Rep. Martha McSally, a Republican from Arizona and former Air Force A-10 pilot.

“We're not going to make a further commitment until we know where we're going with both the A-10 and the F-35,” he said, referring to the further Initial Operational Test and Evaluation (IOT&E;) testing between the two aircraft.

A “fly-off” between the two, part of the IOT&E; testing, is expected in the near future.